Don’t Fool Yourself for 2020 Elections 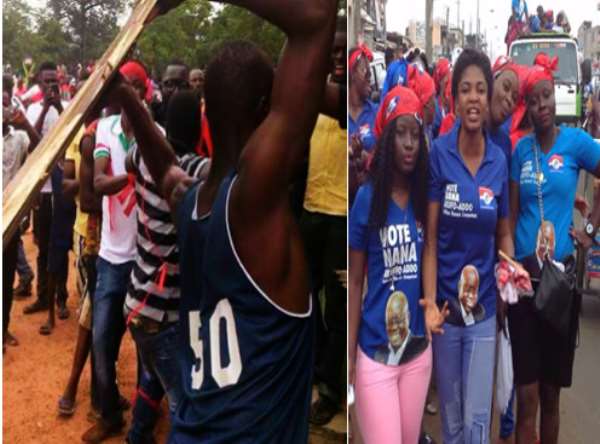 Electioneering might have started already in Ghana ahead of the upcoming general elections in the year 2020. The two dominant parties, NPP and NDC have started scoring political points through propagandas and counter-propagandas. Before you make your mind for whichever party you wish, let us understand the term electioneering and its impacts on the politicians, you and the nation.

The Cambridge Dictionary defines electioneering as the activity of trying to persuade people to vote for a particular political party. In Ghana, it is often understood as campaign for elections. The basic activities which both the politicians and the grass-root party members do include wearing of party T-shirts, usage of party umbrellas and banners, erection of billboards, political speeches and discussions through various media etc.

The persuasion includes manifesto promises or empty rhetoric, lies, giving money to would-be voters, and endorsement of candidates by the various interest groups. One critical aspect of the persuasion is what is termed as the vote-buying. When you sell the power of your thumb, you can never expect more from the politicians. The politicians will say that they created 7000 jobs, but truly for themselves, family and friends.

One Mary Frimponmaa Agyeman in her Opinion article titled “African Politics Has No Conscience” which was published on March 6, 2019 on Modernghana.com, rephrased Abraham Lincoln’s definition for democracy in African context as “government for the politicians, from the people and for the politicians” This is almost true in all African politics.

Some politicians spearhead their personal interests than national interests. So, does it worth sacrificing your life or somebody’s life for a political party? We are one people. There is no need for violence and intimidation against people who are in other political parties than yours. The politicians do not hold sticks, neither do their children. It is you the poor crazy guy who will be injured or dead or be taken away in handcuffs by the police.

How on earth could there be statements like " boot-for-boot" and "all die-be die" ahead of elections if the interest of the Nation is first? As people of one nation, we need to avoid tribalism and partisanship and take the politicians on their words. Those of you who vote on tribal lines, how developed are your regions and your communities?

With all the aggressiveness, many a time, the NDC and the NPP are never shy of the crocodile plea; see my innocence and lift me up to the shore. Since we seem to forget easily, the politicians take us for a ride.