Nigeria: Only Fools Die For Looters! 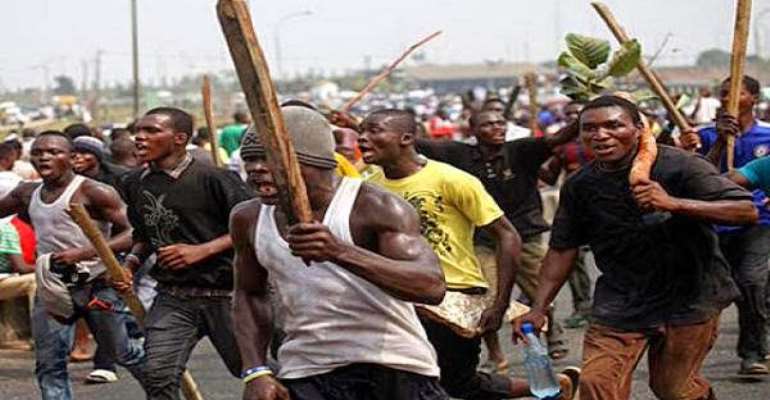 A chapter in my new book, “NIGERIA: Why Looting May Not Stop ,” is entitled, ‘Dying For Looters.’

Tomorrow is the governorship and state assemblies elections in Nigeria. One very sad, painful truth is that there are some fellows who call themselves “party supporters” who may not live to see the end of the voting exercise tomorrow or hear the results declared. There are some others too who may die the day the results would be announced because they would eagerly indulge in some violent activities on behalf some politicians defeated in the elections.

But these are clearly avoidable deaths which will only happen if people refuse to learn from the past foolish mistakes of others, and so fail to place appropriate value on their lives. In this case, it is a choice, either to live or to die.

Many politicians who are out there threatening to unleash fire and thunder during these elections have carefully removed their families very far from the battlegrounds they are busy creating here and there. Some of them have since flown their wives and children abroad where they are now enjoying the best comfort and pleasure money can purchase. So, they are not expecting that their children would be among those “supporters” who would confront their opponents on their behalf and get wounded or even killed.

Their wives would not be around to lead the female supporters who are equally spitting fire as they express their readiness to fiercely battle their counterparts in the opponents’ camp. Their wives and children would only be brought back to join them to wallow in boundless comfort when the battle is won – after some fools had died and gone to hell while fighting to ensure that these low characters were rigged into office.

And what is the motivation for this miserable and very hazardous life? A few crumpled naira notes, maybe, some bottles of gin and ill-fitting T-shirts bearing the face of the “leader” whose battle they are warming up to fight!

But dear naïve “supporter,” if you are reading this article, please, make up your mind to save your life. You have only one life. Don’t waste it for anybody. You may have fought these political battles in the past and escaped, but you may not be too lucky this time around. You may die!

By the way, who is this fellow you have agreed to fight and die for? Stripped of all the pomp and flowing gown, he may just be another scum out there merely looking for a meal ticket. And that is the bitterest part of it. You may even be surprised that you are more intelligent and better talented than him.

It is not yet too late for you to break your ungodly agreement with him, leave him and go and find something meaningful, safe and profitable to do with your life. It is also not yet too late to learn a trade or register for an adult education programme to improve yourself. Indeed, it is never too late to start on a clean slate.

In a few years’ time, you may even discover that you now have a life better than the fellow you would have wasted your life for. Just look him in the face today and tell him that he should draft his wife and children to head his political fighting squad, that you have now realised the true worth of your life, and so no longer wished to waste it fighting for him. In fact, he is not worth risking your life for!

Only a few days ago, for instance, at a presidential rally of the All Progressives Congress (APC) in a South South state, a federal minister was threatening to match fire with fire with his state governor and his party, the opposition Peoples Democratic Party (PDP).

“Whatever [he] wants on Saturday, we will give him…He is afraid. We will battle him to the last. On Saturday, they should get ready.” he thundered.

Now is it possible that this fellow who would surround himself with well-armed security men as he goes to cast his vote tomorrow and be put on the spotlight by the battery of reporters and cameramen who would accompany him to the polling station, would also want to be in the streets fighting his opponents himself as he has boasted? No, he loves his life so much to put it at any form of risk. He is depending on some naïve people to fight for him. But these people can refuse to fight for him. Like I said, it is a choice. Choose life and reject death. If he is hell-bent on fighting his state governor to impress President Muhammadu Buhari, he should arm himself and his family and make the war a family matter – and equally take whatever comes to him in the process, life or death.

Most of the time, these “leaders” do not even have the slightest hint of contact with these people that derive animation from calling themselves their “ardent supporters.” In fact, if they ever do, it may just be to come out in front of their houses or step out of their luxury cars at some other places to address and charge them to be prepared to lay down their lives to ensure that only the “credible candidates” (themselves) win the election “for the good of the state and the nation” (whatever that means!).

What beats me is how a human being could devalue his life so much that he would be willing to expose that life to serious danger by agreeing to undertake a violent activity on behalf of someone who may not even be informed if he is killed – someone who does not even know him personally or care whether he lives or dies. Yes, someone who would certainly not attend his funeral or even ensure that he got a decent burial.

On the day this fallen “great supporter” would be buried, the man he fought and died for may be somewhere enjoying himself at a lavish party thrown for him by his friends to celebrate his “fraud-slide” victory at the polls (if he won) or at some cozy spot somewhere in town “making peace” with the opponent his “supporter” had died fighting, which in other words simply means: negotiating a plum position for himself or his cronies (if he was defeated).

All these would be happening, while the body of the person who had fought and died for him would be lowered into the ground at a miserable funeral – leaving behind a wife and children who would now face the bleak future alone.

I am hoping therefore that this article would touch somebody, motivate him to rethink and review his choices during this election and devote his life to meaningful causes. I am also hoping that inciters and/or sponsors of violence, no matter how highly placed, should be treated like common criminals (which they are) and dealt with according to the law.

Once again, only a fool would choose to die for a looter.

*Ugochukwu Ejinkeonye, a Nigerian journalist and writer, is the author of the new book, NIGERIA: Why Looting May Not Stop ( [email protected] )

A new book every African must read: For more info: https://ugowrite.blogspot.com/2019/02/nigeria-why-looting-may-not-stop-new.html

15 Assembly Members, others granted bail for cursing Regiona...
11 minutes ago

I wanted to turn down Accra Regional Minister job because I ...
17 minutes ago