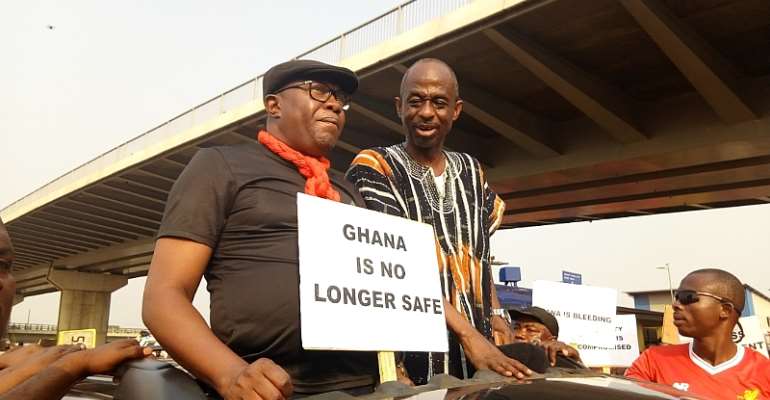 The Criminal Investigations Department of the Ghana Police Service's quick invitation to our hardworking National Chairman, Samuel Ofosu Ampofo, over a leaked tape just after the tape, came into the public domain surprises many well-meaning Ghanaians.

As a well-established security investigations department like the CID, one would have expected them to exhibit a high level of professionalism by going through a thorough investigative processes to ascertain the authenticity of the said tape before inviting our National Chairman.

Our biggest worry is on the basis that, this same CID who is going to investigate the leaked tape lacked the confidence it deserves in doing so. This because, the head of the CID, DCOP Tiwaa Addo Dankwah, who was once heard on tape convincing Kwame A-Plus not to expose the corrupt practices in the Akuffo Addo Government since they all belong to the NPP Party, and it will make the Government very unpopular. The head of the CID now denied the tape and alleged that her voice has been doctored.

Interestingly, many Ghanaians were astonished when after this damning statements from the then Deputy CID boss, she was never investigated but rather she was awarded by the President by replacing her with Mr. Bright Oduro, the then CID boss, who was forced to retire, as the new CID boss. Again, she was promoted to DCOP by President Akuffo Addo for her good done by convincing Kwame A-Plus not to expose the Akuffo Addo Government.

On these stated facts above as bases, it is very clear that the CID now, as usual, is pursuing the agenda of Government and the NPP Party, not any national interest.

Is it not surprising that the invitation came just after the NPP Party's Press Conference where they called on the CID to do so?

As we are aware, our hardworking National Chairman, as a law-abiding citizen, has served public notice he will honour the CID's invitation today at the CID Headquarters in Accra. We urge all NDC Party members and sympathizers and all concerned Ghanaians, especially those within this Constituency, to remain calm and resolute and we are of the firm conviction that our National Chairman is innocent as indicated by himself and as a Party, we are solidly behind him.

Covid-19: Breaking Safety Protocols Should Be Our Last Mista...
14 minutes ago