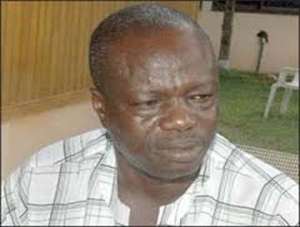 OI hardly use information from the social media as a major source of information for any decision I make. However, when I read this piece on the ghanaweb.com , which also sourced Accra-based Okay FM, attributed to my good friend and former Deputy Minister for Local Government and Rural Development during President Kufuor's administration, Captain (rtd) Kwame Nkrabea Effah Dartey, I had goose pimples all over me.

I said journalism is in terrible danger in Ghana. He is reported thus: “Former Member of Parliament (MP) for Berekum Constituency, Captain (rtd) Nkrabea Effah Dartey is of the view that Ghana's ace undercover journalist, Anas Aremeyaw and his crew from Tiger Eye PI would have been wiped off with a sniper if Ghana was the United States of America”. His main reason for such a remark is that “the modus operandi of Anas in unravelling corrupt practices would not be allowed in such countries, which reinforce his point”.

I was so sad for two reasons: Firstly, Captain Effah Dartey is a lawyer and my expectations of him among others is that no matter what crime anyone has committed in the society, due process must be the ultimate channel to be used in exacting punishment, if any. Secondly, I am very much aware that at a point in the life of the Captain, he owned a newspaper, The Moment, if my recollection is not impeded by time. For a lawyer and a newspaper publisher to make a veiled statement in support of killing of journalists because of their modus operandi is just unfortunate and a threat to democracy and our collective efforts at fighting corruption – the biggest canker in Ghana today.

What is more worrying about this statement is the fact that it has been made, following the gruesome murder of a member of Tiger Eye PI just about a week ago; perhaps a justification for the attack on the remaining team. It is also very amazing to note that out of the 12 episodes of the Tiger Eye PI investigations, it is only the one about the judges and the GFA which attracted the anger of a certain class of people in this country – the elites whose colleagues were caught and exposed for what they are.

The Tiger Eye PI made an exposure on the Osu Children's Home, a very heartbreaking scenario of how innocent children who were supposed to receive care and love from the state ended up being maltreated and sent to their early graves in some cases. The Pantang Psychiatric Hospital episode also brought to the public knowledge how our compatriots with mental health conditions were treated.

The cocoa smuggling syndicates of public officials paid by the state to prevent the smuggling of the beans that have been our major source of foreign exchange for decades were aiding and abetting the smuggling of the produce to the detriment of our dear nation. Yes, the operations of the team on CEPS officials and its outcomes took a whole President of the Republic to move to Tema to express his anger and frustrations about corruption within the service. These and many more such exposures by the Tiger Eye PI were in the broader interest of mother Ghana.

Majority of us were happy with the exposures not because we so much hated the culprits of the undercover operatives, but we love mother Ghana more. Why did the exposure of some judges and the rot in the GFA be an issue for the elite in our society such that threats were issued in some cases against the members of the team? Today, some people, including Captain, are looking at the form of the investigations of the team and not the substance.

All of us in this country are aware of the level of corruption we find ourselves in. However, because of the institutional weaknesses, it has become extremely difficult for us all to fully expose and punish people who engage in these acts. Corruption has become complex to detect in our society today and so we cannot punish the perpetrators, except those who engage in petty corruption.

Ruling political parties have lost elections on the basis of corruption during their tenure, but the succeeding governments have not succeeded in prosecuting those we suspected to have committed some acts of corruption against the state, why? The state institutions are so weak that tracing some of the acts becomes so difficult.

In other jurisdictions, former presidents have been jailed for corruption, while others are on trial. South Korea and Brazil are very recent examples. How many of our former presidents accused of being corrupt have been brought before court when their opponents won political power? Desperate situations require desperate remedies, so the sages say. If the traditional systems of identifying and exposing corrupt people do not produce results, then unorthodox means which expose thieves in high office and people who are given the red carpets in society must be part of our modus operandi in fighting crimes.

We live in a country where influential people use the technicalities of our judicial system to wriggle themselves out of the hands of the law even when the ordinary person knows that that an influential person has committed a crime either against the state or a poor person in the society. Many people have travelled too early on the journey of death because some morally bankrupt lawyers with the aid of some of their corrupt counterparts on the bench have conspired to deprive the poor of their property.

In other jurisdictions, such lawyers and their corroborators on the bench would have also been shot dead by the aggrieved victims based on the actions of the lawyers. Have you thought about that and would that have been justified? Yes, many lawyers would have been shot dead in broad daylight because they inflicted injustice on some poor litigants. If that is the part a section of our society wants to travel, they are likely to fall on their own daggers so soon.

In a closed society as ours, (don't deceive yourself into thinking that our democracy has opened up our society, just look at how difficult getting harmless information from public officers are) if journalists, particularly, investigative journalists, should use the status quo as a means of exposing wrongs in our society, we will get nowhere. And if others believe that the 'unorthodox' means of penetrating the iron-cladded gates of corruption requires that snipers should mow down investigative journalists that will give them just a temporary respite.

This society has travelled that path before and the outcome was the anger of junior officers who woke up one morning and took control of the country and went on a killing spree of those they suspected were responsible for the mess in which the nation found itself. We have not forgotten that Captain (rtd) Nkrabea Effah Dartey was one of the angry officers who joined the crusade to inflict their brand of justice on suspected corrupt politicians and members of the public.

Today, journalists who bring into the limelight shady and criminal activities of a few need to have their lives 'snipped' out of them just as it has happened to my colleague Ahmed Hussein-Suale, because of their modus operandi to protect the society and expose high-profile criminals walking around in suit as men of integrity. Yes, per his popular and most loved song, this nation must not do anything about our situation. We need to continue to wait on the face of God for him to solve our problems for us.

Yebetwen Nyame anim, but for how long? Those who wish and have the means can pay assassins to murder investigative journalists, but the society will rise up against them one day. Adieu, Ahmed.