A short history of the creation of regions in Ghana 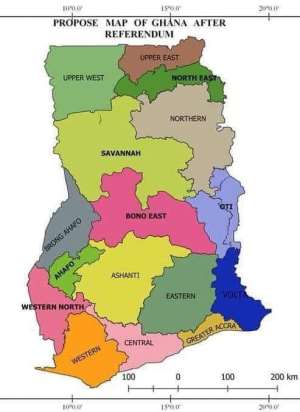 First, there were five. And now there will be sixteen!

Ghana is made up of four, somewhat disjointed, units. First, there was the Crown Colony consisting of all the coastal areas of present day Ghana. Formal official British control of this area can be dated to the Bond of 1844 which laid the legal foundation for British colonization of the coastal areas. The Ashantis, who had been fighting a series of wars with the British for control of the coast, were finally defeated in 1896 and forced to become a Protectorate of the British Crown. The Ashantis rebelled again in 1900 but were subdued by 1901 and in 1902 were brought directly under the jurisdiction of the Governor of the Gold Coast. To forestall the advances of the French and Germans, the British extended “protection” to the areas north of Ashanti. In 1902, they proclaimed the Northern Territories a Protectorate bringing them under the rule of the Governor.

As part of the First World War the British and the French took over German Togoland and divided it between themselves. The League of Nations, formed after the war, recognised British occupancy of its part which they called Trans Volta Togoland and mandated them to administer it on behalf of the League. In 1956, with Gold Coast on the high road to independence, the United Nations, which had taken over from the defunct League of Nations after the Second World War, organised a plebiscite in the TVT to decide if it would become part of the Gold Coast prior to its independence. The plebiscite was held on May 9th 1956 and the Yes side won a highly disputed and controversial 58% of the votes. The agreement for the incorporation was formally signed on December 13th 1956 – three months before our independence.

It was these four units (the Crown Colony, Ashanti, the Northern Protectorate and TVT) that, together, gave birth to the new nation, Ghana, on the 6th of March, 1957. But the new nation started its life with five administrative regions. Ashanti was basically retained as one region. The Crown Colony was divided into three. Two parts became the Western and the Eastern Regions respectively. The last bit of the Crown Colony was added to the southern parts of TVT to form the Volta Region. The Northern Protectorate also got a boost when the northern parts of the erstwhile TVT were added to it to form the Northern Region.

It is worth mentioning here that even educated Ghanaians make the mistake of thinking the TVT became Volta Region on the attainment of our independence. Nothing could be further from the truth. Since the plebiscite that incorporated the TVT into the Gold Coast was a controversial affair with parts of the TVT vehemently against that union, it would have been imprudent to allow the TVT to remain as a region on its own. It was split up to forestall any attempts to return to the status quo ante independence. Three of TVT’s southern districts (Ho, Kpandu, and Buem/Krachi) were added to the Anlo and Tongu districts of the Gold Coast to form the Volta Region. The northern half of the erstwhile TVT, comprising Mamprussi, Dagomba and Gonja districts, were added to the Northern Protectorate to become the new Northern Region.

The first post-independence region to be created was Brong Ahafo. It was carved out of the Ashanti Region by the Brong Ahafo Region Act No. 18 of 1959 and officially came into being on 4th April 1959 barely two years after independence. The CPP government, controlling a good majority in the pre-republican parliament, easily passed through the motion. It has been said that the CPP government, facing its greatest opposition in the Ashanti Region, split the region for political reasons.

On 1st July 1960, the Upper Region, carved out of the Northern Region, became the 7th region of Ghana. The birth of Upper Region was made to coincide with the day Ghana became a republic.

The Central Region was created out of the Western Region just in time for the 1970 population census. This happened during the Second Republic led by Kofi Abrefa Busia, whose Progress Party government had a huge majority in Parliament.

Greater Accra Region has a somewhat complicated history since the region includes the national capital. Even though it was legally and geographically part of the Eastern Region, it was referred to as Accra Capital District and was administered by the Minister Responsible for Local government. The Greater Accra Law (PNDCL 26) of 23rd July, 1982, eventually gave formal status to the area as a region separate from the Eastern Region. This decree also designated the Ada Local Council as part of the new region. This brought Ghana’s administrative regions to nine.

In 1983, the Upper Region underwent a cell division. It was split into Upper East and West Regions. This was the last region creation for the past 35 years. Within this period the country’s population more than doubled from a 1984 estimate of 12.3 million to today’s estimate of 29.4 million. This set the stage for the recent creation of regions. From 10 regions, we are going to have 16 – a 60% increase. It is the first time more than a region is created at a time. And it is the first time in our history that the people involved in the areas to be made into new regions have been asked to decide on the matter.

There are a few interesting consequences of the changes. The relative population sizes of the regions will place Ashanti and Greater Accra far ahead of the other regions. The former TVT will now be found in five different regions. School children will now have to learn that Ghana is divided into 16 administrative regions. They will have to learn the new capitals (yet to be announced) and the names of the regional ministers. This is a long way from the writer’s school days when all we had to learn were eight regions.

The creation of new regions is an inevitable process of our growth. Our population has increased tremendously and the distribution has changed. Last month’s referendum may have been long overdue. It is unfortunate that the whole process was so politicised. The reports of voter fraud cannot be dismissed as inconsequential. The voting process lies at the heart of our democracy. It is the ultimate expression of the sovereign will of the people. If the current malpractices are not properly investigated, our belief in a plebiscitary democracy will be undermined. This has consequences for our parliamentary democracy too. Unfortunately those who rail against the actual voting process are branded as people who are against the creation of regions.

The irony of it all is that, in most of the areas where fraud was reported, it was not even necessary as a Yes vote would still have won without it. After all, an 83% margin of victory is as good as a 97% one. The Electoral Commission’s review of the voting process is eagerly awaited. Even if we take the present outcomes as a fait accompli, those who flouted our voting regulations should still be punished as an example for future offenders.

Another eagerly awaited development will be the government’s campaign promise to make the posts of District Chief Executives and Regional Ministers elective ones. This will really strengthen the decentralization process that the creation of new regions is supposed to promote. It will require a change in the constitution but it seems many Ghanaians are of the view that a modification of our present constitution is, indeed, necessary.

And so we plod on with our trial and error democracy. Will the iterative process lead us to better practice?