African Baptism Deaths: Where Was the Christian God? 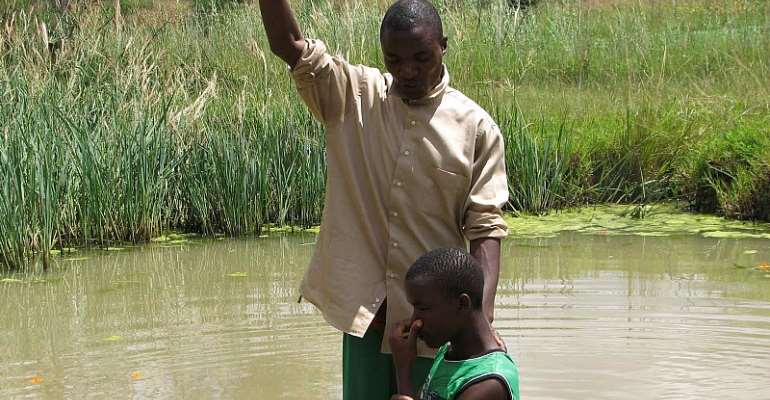 In 2018, two cases where people died in the course of baptism should serve as some food for thought to African believers. In fact, the two incidents should get Africans to rethink their faith in God, at least in the Christian god. Let’s examine these cases. The first case happened in Ethiopia. According to a BBC report , a crocodile jumped and attacked a pastor while he was performing a baptism in a lake.

The pastor was bitten on his legs, on the back and hands. He later died as a result of the wounds that he sustained from the attack. The report states that, but for the fishermen, the crocodile would have taken away the body of the pastor. The men used their fishing net to stop the crocodile from escaping with the body. In Ghana, no crocodile attacked during the baptism. In fact, the pastor was safe. It was the person being baptized who died. The pastor immersed the church member in the river on two occasions. The man emerged the first time but on the second time, he could not. The man drowned .

The two cases should provoke African Christians to take a critical look at their Christian faith. African Christians should start asking very pertinent questions. First, where was the Christian god during the baptism processes in Ethiopia and Ghana? In the Ethiopia case, why didn’t Jesus stop the crocodile from attacking the pastor? Africans Christians believe that Jesus is the savior of the world. They regard, revere and worship Jesus as the savior of humankind. So why didn’t Jesus save the pastor, his own pastor who was performing a baptism? In fact, it was the fishermen who actually saved the situation and prevented the crocodile from taking away the body of the pastor?

So what does that tell African Christians about the assumed salvific power of the Christian god? Are there such powers? Or are they a make-belief?

Look, what happened in Ethiopia is a typical case of a savior that could not save; an omnipotent being who was not powerful enough to stop a crocodile from attacking a pastor. Imagine, an ordinary crocodile, not even a shark, or a lion! A savior that could not save somebody baptizing in a river from being attacked or another being baptized from drowning, what kind of a savior is that?

African Christians expend so much resource worshipping the Christian god. They try to imitate Jesus by performing a baptism in a river and when tragedy strikes as it did in Ethiopia and Ghana, Jesus is nowhere to save them. Jesus is unable to come to their help. Is that not enough reason for African Christians to begin to question and to doubt the existence and power of this Jesus? So where was Jesus when the crocodile jumped and attacked a pastor during baptism? Was he sleeping? Did he go on a journey? Did he temporarily cease being omnipresent and omnipotent? Where was the Christian god when the fishermen were dragging the pastor’s body with the crocodile? Was Jesus unconscious? I mean how does one explain the fact that a cleric died in such a violent manner, and people still believe that there is an existing active god/saviour out there who deserves to be worshipped?

Africans should wake up from their Christian dogmatic slumber and stop deceiving themselves, and endangering their lives and those of others. African Christians should stop risking their lives believing that Jesus will save them. Jesus did not; Jesus will not and Jesus cannot save as these cases have illustrated. Africans should know that whenever they perform a baptism in rivers, they are literally endangering their own lives and those of their church members. And that there is no deity that can save them if a crocodile attacks, or if they are drowning in the rivers. If Jesus could not save the pastor in Ethiopia and the man being baptized in Ghana, African Christians should know that the assumed salvific powers are in doubt. The existence of the Christian God is a suspect. How many baptism deaths will it take till Africans realize that the Christian god is imaginary and cannot save anybody?