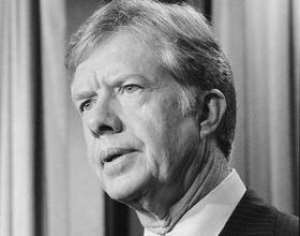 The United States of America, one of the leading superpowers in the world, most often than not, exhibits much interest in the activities of the Gulf region. To say that the US has much priority in the region is an understatement because the activities of the Pentagon's in the Gulf jurisdiction has changed ever since the Carter Doctrine came in fruition in the 1970s and the Tanker War in the 1980s.

As a superpower country, the US sees the need to have and control at least one of the world's insatiable and most consumed resources; and that's the oil. They again see the need to have the power as to the angle with which the oil must flow to the benefit of them. Without Gulf oil, the world economy grinds to a halt and the economy of most countries wouldn't be able to contain the pressure that comes with no oil or very insufficient oil. By doing so, the dollar which is the currency of the Pentagon's is what the world's oil is been traded on at international market - and this brings to the mad rush for the currency and constant, continuous and unending boom of the US economy. However, it is on records that the country has billions of barrels of oil stored in underground silos which has an estimated consumption for several decades if oil vanishes from the world. According to a report from Rystad Energy that estimates the US to be sitting on an incredible 264 billion barrels of oil.

The Bush Administration which happens to be the core initiator of the massive reigns left in Iraq, did greatly to dispose Saddam Hussein, with democracy as purported to be the administration's aim of doing so. However, it wasn't so, not at all! The smarter Bush, thought wise for his country that oil could flow more freely if Saddam Hussein is deposed. So the driving motive behind Saddam's predicament wasn't just to plant democracy on Iraqi soil but purely on oil interest. If US, the much taunted about on democracy, really had (has) that concern, What about Saudi Arabia? What about Britain?

Every country on this planet would want to be greatly respected and have its directives pushed through without questioning. And that is why the Pentagon's cares more about keeping various nations within its orbit for purposes of trade and mutual defence than about whether such rulers are democratically elected or not. The US would have been more joyous if the current Iranian leadership could be replaced with someone friendlier and kow-tow to its likes and dislikes. If the US could turn back the clock of time to the 1940s, it would have loved to go to war with Iran. The American right-wing would have pursued victory at all cost regardless of the ramifications thereafter.

Surprisingly, is totally incomprehensible why people would be protesting for change and economic transformation, while you could see some countries and their European allies taking advantage of this situation to add fuel to the fire in order to paint Iran into another Syria, and if possible, Iraq.

Pro-regime-sustainers say the demands by the protestors are impossible to warrant a change all at once under the current government and circumstances relative to same. The demands are:

Pro-regime advocates alleged that they have seen a clear symptom of "sponsored protest" led by some European countries and their allies within the MENA region. They pointed out demand 2&3 as what the European caucus has been pushing for.

However, despite what some are saying, it is highly unlikely, not in the best of space and time that the current regime would actually collapse. There is still overwhelming support for the current regime in Iran who are in support of Khomeini and the Islamic Republic of Iran.