The Morning After The Confab 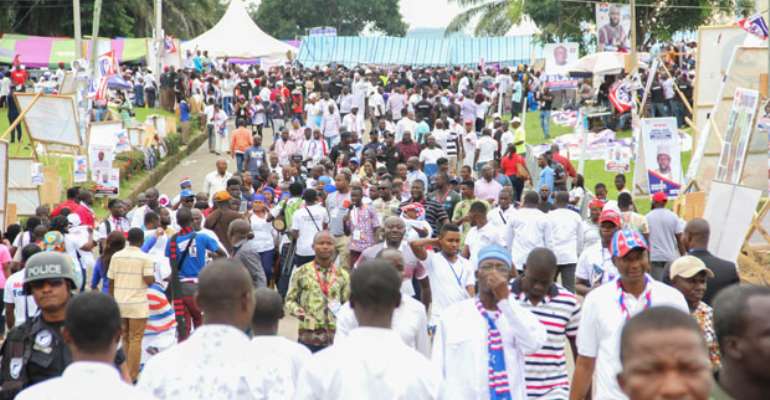 After the NPP Delegates' Conference on Sunday morning, I quickly took from my private library a book I had read three times titled: “Chasing The Elephant Into The Bush – Politics Of Complacency” written by Dr. Arthur Kennedy. When my good old friend wrote that book, some NPP supporters lambasted him severely even though some of them did not take time to read the book. The title alone made them treat the book with contempt.

I decided to read the book the fourth time because of what ex-president Kufuor told the delegates in Koforidua on the day of the conference. He said the NPP should be careful because complacency can make the party slip back to opposition. It happened in 2008 when the NPP thought because of the good works done by the Kufuor-led administration, winning the general elections was a done deal. Instead of winning more souls and bringing on board floating voters for the party, the NPP then thought Ghanaians would never go against the party. Supporters at the NPP strongholds felt if even they didn't go out to vote, the party would win power. Before one could say Jack Robin, the NDC had more parliamentarians and used that to convince Ghanaians to vote for the party during the run-off.

Ghanaians are suffering today because of politics of complacency exhibited by the NPP during the 2008 general elections. If the NPP had not been complacent and had worked hard to maintain power to continue the good works of Mr. Kufuor, Ghana would have by now been an 'Eldorado'. The NPP relinquished power to the NDC on a silver platter and regretted badly. The sages say once bitten twice shy. The good people voted the NPP to power after witnessing eight years of misrule and theft by the NDC. If the NPP becomes complacent, as they did in 2008 and power slips from their hands, Ghanaians will never forgive the party and its leadership.

Albeit the Akufo-Addo-led administration is doing so many things, supporters of the party only think of what the party will do for them instead of thinking of what they can also do to make the party maintain power. The time has come for the NPP to stay focused because the NDC is up in arms against whatever the Akufo-Addo-led administration is doing. Now that we have gone to congress to elect national executive members after the constituency and regional executive elections, the time has come for hard work. Over the years, what I have observed in the NPP is that when a woman organizer is elected at the constituency, regional and national levels they go back home to relax until they have the opportunity to cook for delegates when they seize the opportunity to make money. Instead of organizing the women, they rather become women 'disorganizers' as they compete with women in the party for school feeding contracts.

As for the regional and constituency chairmen, what I observed when the party was in power during the era of Mr. Kufuor was that they left the job and started looking for contracts from other districts. These were the guys who annoyed the foot-soldiers because they lived flamboyantly, making the foot-soldiers feel cheated. This time around, we want to see them seriously involved in the activities of the party so that the party could maintain power in 2020. During the 2016 general elections, some constituency chairmen pocketed monies meant for campaign but the foot-soldiers did not complain after the elections because the ultimate prize was won.

Youth Organizers in both national, regional and constituency levels should gird up their loins because 2020 is going to be tough and they are the ones who will lead the onslaught. Anytime the NDC is in opposition and wants to come back to power, they use the youth in their party particularly those at the Zongos to cause mayhem and inject fears into the minds of the people. It was their actions that compelled Nana Addo to make the pronouncement “All die be die”. There is no time to waste and the NPP should start today because the Akans say 'the earlier you start to swim, the earlier your eyes become red'.

“I am Not Stealing NDC Policies” -Nana Addo

Sometimes I wish I could get the opportunity to sit communicators of the NDC down and lecture them on State Directive Principles. Dr. Bawumia was right when he said the NDC people do not read. As at the time we had our independence, Ghana had no shipping line and had to rely on foreign ships to export our goods to overseas and hire same to bring in whatever we purchased from abroad. Dr. Kwame Nkrumah and his CPP government established the Ghana Black Star Line and bought 16 ships for the shipping line to operate. When Professor Busia took over as the Prime Minister of Ghana, he did not dismantle the Black Star Line but rather took the old ships to dry docks overseas for repairs. He did not see any reason why he should not continue with that project because the 'Abongo Boys' who handed over power to him did not do same.

As for Dr. Hilla Liman, he even bought four more brand new cargo ships to add up to the 16 existing ones to make 20. When Rawlings usurped power, he sold all the 20 ships to his cronies and ended the dream. Today Ghana has no shipping line. In recent memory, when Kufuor left power, the N1 George Bush Highway was not completed during his time but when the late Mills took over power and the road was completed, he invited Kufuor for the cutting of the tape for the commissioning of the road. It was the same Kufuor who went to China to solicit funds for the construction of the Bui Dam which had been on the drawing board since 1921. Unfortunately, the project was not completed during his time but when the project was completed when John Mahama came to power, he was the one who went to Bui to commission the dam.

Ex-President Kufuor constructed many affordable houses during his tenure of office but when Mills/Mahama took over power, they abandoned them. President Akufo-Addo has stated clearly that all projects started by the NDC will be completed since monies used for such projects were not the personal monies of anybody. To this end, he instructed all MMDCEs to make sure projects started by his predecessor were completed before they started new ones. Since he started his regional tours, he has been commissioning projects which were started by the NDC and completed by the NPP. If the NDC people are crying 'maa maa” because of what the man is doing, they can go and burn the sea or use a tea spoon to drink the sea water because loans that were taken to embark on such projects would be paid back by generations yet unborn. If these NDC members do not know, government is about continuity.

It was Mr. Rawlings who constructed an asphalted road from Kintampo to Paga and when Kufuor came to power he also constructed similar asphalted road from Kumasi to Kintampo. That is how nations are built. If a president starts a war with another country and he leaves office, the new president continues with the war. If not, why is Donald Trump not calling back the US soldiers based in Afghanistan? The war was started by George Bush for Barrack Obama to follow suit. From all indications, if Ghanaians make a mistake and vote the NDC back to power in 2020, they will abandon the free SHS and the teacher and nursing trainee allowances.