A Case For Critical Thinking In Nigeria 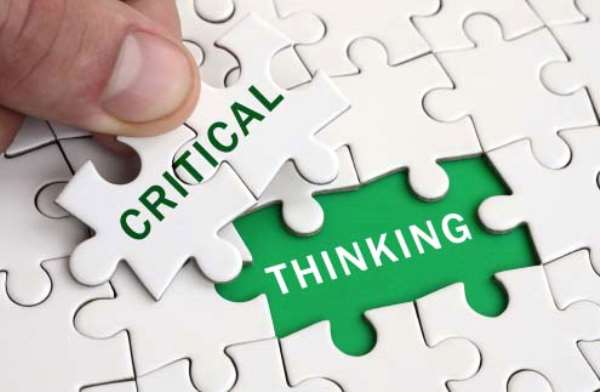 Critical thinking is an intellectual habit that is urgently needed in Nigeria. Critical reasoning skills are required to navigate a world characterized by a rapid flow of information. They are helpful in getting people to know what to believe and not to believe, what to consume and not to consume, what to accept as true, what to be doubted, treated as suspect or be dismissed as falsehood. Critical reasoning is an effective safeguard against dogma, deception, indoctrination, and superstition. While people are often expected to think critically and job applicants are asked to demonstrate critical thinking skills, there are no adequate programs to inculcate such reasoning competencies in schools, colleges, universities and in the society at large.

There are no subjects that are taught at basic school levels to inculcate these intellectual skills. In fact, it is only at the university level that students sometimes come across some elective courses on critical thinking. Thus critical thinking comes too little too late. So Nigerians become critical thinkers by default. Now this situation is no longer acceptable, and it must change.

The aim of this article is not to bemoan this fundamental flaw in the school system, in child education and upbringing but to outline a proposal to rectify it, to mainstream critical thinking in Nigeria. Critical thought is often presented as a facility that only a few intellectuals, mainly philosophers or scientists enjoy. This should not be the case. The critical faculty is in all human beings. So, all humans are both actuals and potential critical thinkers. Human beings are critical by nature but dogmatic by nurture. The critical examination of issues is and should be exercisable and accessible to everyone. So this critical thinking program is an effort to reclaim our natural heritage. It aims at popularizing critical reasoning and turning it from a reserve for a few eggheads into a public good, a vade-me-cum (go with me) for all.

To this end, this program aims at introducing the subject of critical thinking in Nigerian - primary and secondary - schools within the next five years. For critical thinking to be a permanent feature in our society it has to be learned. And its learning must start from the basic, elementary levels. It has to be part of the school program. Critical reasoning should be among the subjects that are taught in the schools from the kindergarten to the tertiary levels, in vocational, technical and grammar schools. Critical thinking is so important, and so central to knowledge acquisition and understanding, to life and living that it cannot continue to be an elective course that is occasionally offered at the tertiary educational level. It should be part and parcel of the educational system.

So the first two years will be devoted to raising the awareness and laying a solid foundation for the fostering critical thinking skills in the country.

The workshops will be used to persuade school authorities to consider having critical thinking as a subject like English, Mathematics, science and social studies. They will be used to identify and motivate teachers who would handle the subject. These schools and their teachers/students will form part of the pilot team. They will spearhead the introduction of the subject of critical reasoning in subsequent years.

Apart from the learning institutions, the media agencies will be targeted in this initiative to foster critical thinking skills because the media sector is often used to peddle dogmatic and superstitious beliefs. Media platforms are used to publish and broadcast spurious paranormal claims such as miracles and faith healing, cases of supposed witchcraft and magical manifestations without any critical perspective. Transcendental/spiritual claims are reported in the media in ways that reinforce these questionable beliefs and notions. So, as part of the awareness program, the campaigners will liaise with the media agencies to inform and educate the public on the need to critically assess media reports, stressing the critical element in media reporting, and in the consumption of media products. There will be sponsored-guest and phone-in radio and television programs to discuss critical thinking skills and to highlight pitfalls in blindly believing all that is reported in the media or all that is published on the internet.

Furthermore, the workshop will be taken to the non-governmental organizations(NGOs) and community-based organisations (CBOs). This effort will help take the message of critical thinking to the grassroots. Part of the reason for the disdain for critical thinking is that these thinking skills are often presented as elitist habits. They are regarded as competencies that are meant for the well educated. The awareness workshops will be packaged in a way that will change this impression and present critical inquiry as an everyday habit that the uneducated or the not so well educated can imbibe and partake. For critical thinking to be a permanent feature in the Nigerian society all segments of the Nigerian society must be involved. Traders, artisans, market men and women, people on the streets must be able to appreciate, apply and relate to this intellectual virtue.

Meanwhile in order to sustain this critical thinking project and eventually realize a critical thinking Nigerian society, promotional and educational materials will be produced. These materials will comprise t-shirts and stickers with inscriptions that encourage critical and reasoned inquiry in all areas of human endeavor. For instance, some of the shirts and stickers will bear expressions such as: Think Critically, Question Every Thing, I Doubt It, Dare to doubt etc.

In addition, there will be handouts that contain basic lessons on critical thinking that Nigerians of all ages and educational backgrounds can use. In fact, text books and learning aid materials on critical reasoning for students from kindergarten to the secondary level will be published.