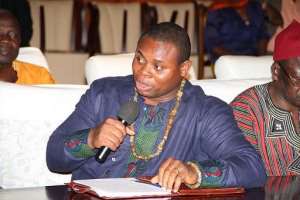 Nice! We need to uphold the rule of law at all times. Now, let us look at the curious case of the KelniGVG contract supervised solely by the Ministry of Communications and how it also violates the Public Procurement Act, and the Public Financial Management Act. But first a short introduction.

The Ministry of Communications has signed a $178 m contract to an ‘unknown’ company beyond its name, KelniGVG. It signed on behalf of the Finance Ministry. The contract essentially is paying $1.5m every month to KelniGVG for the next 10 years to apparently assure revenues and traffic monitoring on the nodes of telecommunications companies without any credible performance indicators. What is worse, should the Ministry of Communications decide to opt out of the contract at any time, Ghanaians will pay 50% of the unexpired term of the contract.

IMANI concludes that if we run a KelniGVG type monitoring system, at a similar cost, for all industries in Ghana, we would be spending $3 billion yearly just to monitor taxes. The country would literally collapse.

Now unto the violations as mentioned earlier.
1. The Kelni GVG contract is multi-year, so section 33 of the Public Finance Management Act, 2016 requires that it should be approved by (a) the Minister for Finance, and (b) Parliament. Even though payments have been made, the contract has not been approved by Parliament. The statement by the Minister for Communications on the floor of Parliament does not represent parliamentary approval.

3. Again the MOC and KGVG have agreed that the Ghana Revenue Authority (GRA) pays for the services of KGVG. This also offends the GRA Act, 2009 (Act 791) which makes the GRA a body corporate with a governing board. The GRA cannot pay for services it has not contracted, which services are outside their budget as approved by Parliament in the 2018 Budget Statement.

4. The Communications Services Tax (Amendment) Act, 2013 requires the Minister for Finance and Minister for Communications to set up the common monitoring platform that KGVG is providing. The payment for the services should be captured in the budgets for these two ministries and paid for by them. If they did not, then as covered entities under the PFMA (Act 921), they should revise their budgets through due process before the two ministries can take on those expenditure.

5. Ministry of Finance, Ministry of Communications, GRA, and NCA are all covered entities under the PFMA. No covered entity is permitted to incur cost and place it on another covered entity that has not budgeted for that expenditure. Please note that under section 96(2) of the PFMA (Act 921), it is a criminal offence punishable by imprisonment or a fine, or both, for a spending officer to spend beyond their budget.

6. On any of these grounds, the contract could be cancelled or any payment for the contract by NCA or GRA can be made unlawful by a court. And the two ministries just cannot find the budget to finance this KGVG contrACT.

7. This is why the Ministry of Communications, Ministry of Finance, NCA and GRA have all been a cited as defendants /respondents in court suits.