The Cost Of Doing Business Is High -Franklin Cudjoe 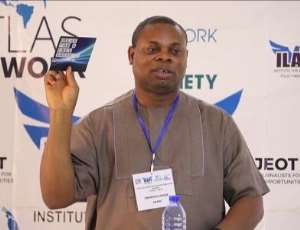 Founding President of think tank Imani Africa, Franklin Cudjoe says that high cost has to be incurred in doing business in the country. Speaking on the Challenges With the Ease of Doing Business to the African Journalists For Economic Opportunity Training (AJEOT-2020), he outlined some of the challenges in doing business.

Mr Franklin Cudjoe said there's an exponential cost in doing business, and as such, there's the need to create a favourable atmosphere for economic prosperity.

"You can play your role as journalists by asking tough and intelligent questions for the government to immediately address what it describes as the numerous economic challenges affecting businesses in the country", he stressed.

According to him, the current environment within which businesses operate is harsh, rendering businesses unprofitable. "Many employers complain that although the government has undertaken some reforms to boost economic growth, the challenges they face persist", he stated

He mentioned that the payment of taxes has improved because the processes one goes through is a bit streamlined. "The cost of doing business is high due to the fact that corruption is still seen in every nook and cranny of society." There are high-interest rates making it impossible to secure financial support from the banks", he added.

He also indicated the depreciation of the cedi against the dollar affects employers especially those who import raw materials for their products. "I know people who in the process shipping cars go through hell as a result of useless immigrants", he said.

He added that Property Tax registration is a big problem in the country. "Almost 100 percent of lands in the Capital are big taxed", he said.

Mr Franklin Cudjoe is, therefore, asking the government and the Bank of Ghana to ensure that banks reduce their rates. He's asking business starters to check, and study the inflation rates they're charged to even acquire a loan to start or do their businesses.

He says if the government fails to stabilize the economy many businesses will collapse. "Businesses are failing; everything is against business owners.

As matter of economic patriotism and prosperity, he believes that the various reforms being undertaken by the government must ease the cost of doing business in the country.

Institute For Liberty and Policy Innovation (ILAPI) AJEOT is a two-day intensive residential certification training for journalists and prolific writers to learn the tools for advocacy and economic principles of classical liberalism to help shape the world.

Gov’t to set up 5-member committee to lead extensive stakeho...
31 minutes ago