If Only Ten Percent Of Us Were Genuine 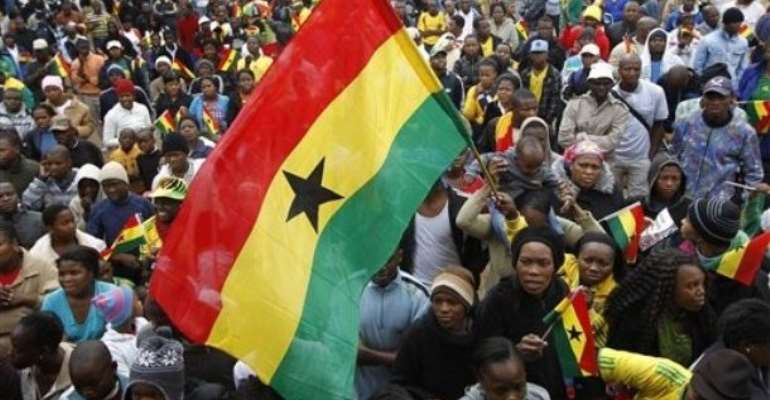 I was enjoying breakfast on my terrace one cool, breezy Monday mid-morning when it dawned on me how wonderful Ghana would be if even only ten per cent of our people (whether as individuals or institutions) whose actions and responsibilities directly affect our life as a people were genuine and doing what’s expected of them. It all began when the mid-morning peace and serenity was disturbed by the loud noise of what appeared to be worshipers at that time of the day. My mind went back to the previous Friday when that Moslem friend of mine waved at me on his way out to the mosque.

Then I remembered that when I turned on my radio on Saturday morning the special voices of Adventists Choir reminded me of the day being a major day of worship. Meanwhile, as an ‘orthodox’ Christian worshiper myself I’d attended church on Sunday, the day of the week when the standard appointment time for the average Ghanaian is “after church”. And since the noise I was hearing didn’t appear to be that of the familiar early morning devotion I kept wondering which churches have their main service on Monday morning, and what do these worshippers do for a living.

Eventually, I got to my workplace but not before having some argument with a wayside preacher who thought he had the right to occupy the parking space for three vehicles. He said he was preaching but for all the time that this man was in my hearing range the only thing I heard from him was an appeal for passers-by to donate money to support God’s work. But that wasn’t all. I entered my office and the noise coming from another preacher who was doing his best to shout louder than his own loud music a few meters behind my window was such that it was practically impossible for me to engage in any meaningful discussion especially on the phone. In other words, these same people who wouldn’t let me have a sound sleep in the night or enjoy my morning peace will still not allow me to have the peace of mind to work during the day. In my desperation all I could say to myself was: ‘oh my God, how blessed Ghana would be if even only ten per cent of all these noise-making, so-called men and women of God, were genuine’.

I kept pondering over this problem of noise pollution in the country and the fact that some people seem to believe that it is their right to make as much noise as they can under the pretext of preaching the word of God and anyone who doesn’t feel comfortable about that is a devil. But even more serious is the fact that it doesn’t appear there’s any institution in this country responsible for protecting the rights of people to live in peace.

And that reminds me of a story a friend told me the other day. He said that when God was distributing resources of the earth our neighbouring countries were complaining bitterly that He was being unfair to them because He gave them so little and gave so much to Ghana. But God’s response to them was “you just wait till you see the type of human beings I’m going to put in that beautiful country. In other words, therefore, it was by divine design that we have the type of people we have in Ghana here.

Politicians & Their Supporters
Can anyone imagine the type of country Ghana would be if even only10% of our political leaders and their ardent followers were genuine and had the well-being of the nation at heart? It would be heaven on earth, I think. Perhaps this is what our first Leader, Osagyefo Dr. Kwame Nkrumah had in mind when he confidently proclaimed that the Black Man (the Ghanaian) was capable of managing his own affairs. The truth of the matter though is that even before his overthrow in 1966 things had already started falling apart, and 60 years on, there’s no indication the centre is about to hold any time soon. All our leaders keep doing making reference to how far some of our contemporaries like Malaysia, Korea and Singapore have left us behind. In sub-Saharan Africa at least, we used to be the pace-setters but now some of even our ‘juniors’ who had to endure civil wars on top – classic example Rwanda – are gradually overtaking us. Na who cause am?

Perhaps they would have done better if their followers were any better. But the fact of the matter is that whenever you hear the ardent supporters of any politician or political party complaining bitterly it would be most unlikely to be about poor performance or policies but rather because they have not gained any personal benefits. How else could it happen that whenever the President fires an official who he himself hired but later finds unsuitable his/her supporters declare war on the President?

Traditional Rulers
There was a time when qualified candidates for vacant traditional stools were actually hunted for, ‘arrested’ and confined before necessary rites are performed to install them as chiefs. Those were the days when chiefs and queens commanded genuine respect. In these days when becoming a chief is dependent on the depth of a candidate’s pocket and not necessarily his suitability what do we expect from them in the end? If there’s still any left, of course land is the hottest commodity on the shelf of any chief. And the indiscriminate way they sell them will make you wonder if God has assured them that He’s still in the process of creating more land. So now when you see a new settlement area that has all been built up by residential accommodation without any space available for school, recreation or market you may first have to find out from the chief of the area before you start pointing accusing fingers at the Town & Country Planning authorities.

Some time ago Nananom used to command so much respect that it would be almost sacrilegious to even suspect them of having anything to do with underhand deals. Not so any longer. Now it’s not uncommon to find some Nananom deeply involved in all kinds of corrupt practices including offering for cash, vacancies that have been allotted to them for free by educational institutions in their traditional area for deserving candidates in what has now come to be known as ‘protocol’. So what respect is left for Nananom while they take bribes from their own subjects? Ten per cent of ‘correct’ traditional rulers would certainly make a lot of difference in our country.

The Police
As for our men and women in marine blue uniform perhaps the least said about them the better since after all they’ve swept all available medals in the corruption league. And let me say that nothing irritates me more than hearing or seeing a police officer on radio or TV claiming that it’s only ‘a few bad nuts’ among them whose activities have earned them such bad name. Really? Of course, it can’t be all of them but what do they expect when they know very well that the negative activities of more than 90% of them are so glaring that any small Anas wouldn’t even need a hidden camera to ‘catch’ them.

I could go on and on and on without forgetting about parents who collude with teachers and school authorities for even BECE candidates to cheat in exams; parents who encourage their under-aged children to register to vote; people who litter indiscriminately or crop farmers who for their own selfish interests feed us with poison by applying dangerous chemicals to force-ripe their products at the expense of public health. But I’d rather sum it all up by wondering how sweet Ghana would be if even only 10 per cent of us were genuine in our dealings.

More Feature Article
ModernGhana Links
Adding an Academic Title to a Chieftaincy Title in Ghana is Inappropriate: Episode-1
Promoting Peace Between Christians and Muslims In Ghana
Awutu Senya West Becomes the Focal Point of Media Attention in 2024
Why Africa Burns
Today's Regime-Fatcats Are Only Chopping-Ghana-Small
I Am Elated!
Greenwashing the Tokyo Olympic Games
Sam Jinapor Puts NDC in Opposition for 20 Years
Akufo-Addo Cannot Be Scapegoated for the Pleasure of Poorly Engaged NDC Politicians
TOP STORIES