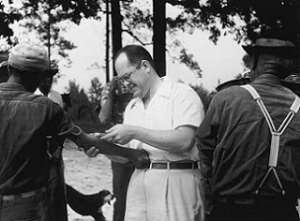 In the period from 1978 till 1981, the Centers for Disease Control conducted a hepatitis B vaccine experiment on homosexuals living in New York City, San Francisco, and Los Angeles.

HIV/AIDS was first detected among the participants in the CDC hepatitis B vaccine trial and quickly spread throughout the gay community in those cities. A body of evidence, including a detailed statistical analysis of the documented timeline of when HIV infection was detected in the men’s blood and reported to the CDC.

Dissidents who have studied the available published data are convinced that this ill-conceived experiment precipitated the devastating AIDS epidemic in America’s homosexual community.

The gay men in the experiment were injected with a vaccine that had been made using human hepatitis B infected blood which was injected into chimpanzees known to be infected with the cancer-causing simian virus 40 (SV40); the virus that had contaminated the polio vaccine.

Before these CDC experiments, there were no reported cases of HIV or AIDS in America. The AIDS epidemic was officially declared by CDC in 1981, at the conclusion of the experiment.

Yet, in the New England Journal of Medicine published report researchers proclaimed the vaccine “safe and incidence of side effects low,” and claimed a 96% success rate.

They failed to mention the emergence of a new disease affecting some of the subjects.

The men in the 'Manhattan experiment' had the highest rate of HIV ever recorded for that time period: 20% were discovered to be HIV-positive in 1980, and over 40% in 1984.

In addition, a re-examination of the stored blood samples from an AIDS trial in NYC by epidemiologists at the National Cancer Institute found that one out of five gay men (20%) tested positive for the new KS herpes-8 virus (Kaposi’s Sarcoma virus in 1982.)

Before 1978, no stored blood anywhere in the US tested positive for either HIV or the Kaposi’s Sarcoma virus, which was not identified until the mid-nineties.

An extraordinary PBS taped an interview with medical historian Edward Shorter and Dr. Maurice Hilleman, Merck’s foremost vaccine developer acknowledged that the polio vaccine, manufactured by Merck, had been contaminated with SV40.

He also indicated the likelihood that SV40 is the source of AIDS: “I didn’t know we were importing AIDS.”

Hilleman nevertheless defended the contaminated vaccine stating: “it was good science at the time because that was what you did. You didn’t worry about these wild viruses…” But in fact, the taped interview was never aired for fear of liability, but it was submitted to the Library of Congress and in 2011 posted on YouTube.

.
In fact, two main questions remain;
How did these two viruses of primate origin get into the gay male population to cause AIDS and a contagious form of cancer?

Can the AIDS epidemic in the US be traced directly to this CDC’s experiment?

Given the lethal nature of these two combined viruses, it is likely that many, if not most, of the men in the CDC experiment eventually died of AIDS.

The actual number of AIDS deaths among the men in the experiment has never been revealed, nor have their medical records were studied. Efforts to obtain this information have been rebuffed invoking the “confidential” nature of the experiment to deny access.

DNA Forum by The Royal Dutch Academy Of Sciences

The Advisory Board of The Dutch Government
The reason Johan van Dongen, the Dutch scientist and micro-surgeon, read over 30.000 scientific papers, books and everything else he needs for revealing the truth about the real origin of Aids and Ebola was in line with the findings of the above-mentioned experiment.

Together with many more evidence, this was the turning point for him in his carrier as the probe by the establishments themselves. For him this evidence came to light on June 13th, 1978, when he attended the meeting; ‘DNA-Research in Discussion in Utrecht The Netherlands.'

During the meeting of The Royal Dutch Academy Of Sciences, the Advisory Board of The Dutch Government, he met Bart Kempinga who was at that time biology student at the University of Groningen, where his doctoral research was at the Department of Science and society sub-faculty of biology with the subject: “Social developments relating to the processing of genes.”

He was also a member of the High School, working on a combination of the cancer virus SV40 with a common intestinal bacterium Escherichia coli in our intestines.

Discussing the dangers of these horrific experiments with him his very short answer was; “It is breaking good science and simply the investigation of the moment. It is just what we do nowadays....”

In fact, you didn’t worry about wild viruses is my overall conclusion…?!!

But facts history from genetic engineering research particularly in the United States wherein 1978, already exists more than two hundred institutions with recombinant DNA techniques work without proper guidelines. Even so, the Russian Academy of Sciences had a considerable number of recombination in its name.

Professor Dr. H.H. Cohen
Professor Cohen, a physician, and bacteriologist was one of the panelists the speakers questioned about the figure and the safe safety aspects over the recombination of human E-coli bacteria with SV40 DNA tests.

Cohen is also the director of the National Institute for Public Health RIV and on behalf of the Dutch Government responsible for the manufacture of dangerous vaccines.

Cohen, who dealt with very dangerous vaccines, stated at the above-mentioned meeting; “I can assure you, we know the vaccines are very dangerous but we just try to make it harmless! It is known that in the preparation of such vaccines certain components are included before being released."

He further stressed, "Let me give you an example: It isn’t secret that live polio vaccine is also in inactivated polio vaccine, the two forms leukemia, which you currently learned on television, mid-seventies of the last century, that contains a possible tumor virus consist namely, the Simian Vacuolating Virus SV40."

"Those tumor viruses, which causes AIDS eds., oncogenic and tumorigenic were later traced in polio vaccine and also on an international level within the framework of the WTO, which established requirements that vaccines should meet."

"The wonder is that this international community from many countries in East and West are generally becoming consensus since this issue began to emerge. Partly socially enforced was because they knew that each other’s preparations would recover."

Editorial
With regards to eugenics, particularly the influence of human behavior is a number of developments in the last century. In fact, with recombinant DNA technology, the establishments have played a role in the war and human depopulation experiments and projects.

This means the principle of parliamentary democracy is incompatible with the state of affairs, where scientists behind closed doors determine how our society will be like, especially since scientists are aware, but mostly unconsciously, quite easily in the service of small but powerful interest groups. We all know the examples.

Scientists also require more and more what our future will look like because the business by allowing it to our scientific and technological progress continues to keep busy reaching consequences for the nature of our society content.

However, it is quite an extremely worrying development when scientists in public will complain about their need to politicians who don't understand nothing and mess up everything.

But what about Africa the continent of guinea pigs? There were a variety of wide experiments by dubious scientists and a crook like Hillary Koprowski. During the most normal course of business, he heavily genetically engineered with SV40 contaminated vaccines on innocent and ignorant Africans.

We know in many books and tens of thousands of scientific papers about AIDS and depopulation projects that are developed under the Apartheid regime and in the former Belgian Congo.

Nowadays almost nobody knows how disastrous the first steps in the vaccination era have been because Koch’s vaccine caused Tuberculosis T.B.C. As a consequence of these inoculations, thousands of children and adults died, because of Koch’s contaminated vaccine.

Kochs' statement; “Because of this contamination no man on earth is free of viruses and other micro-organisms and when people get sick then we’re working against it now and in the future by making a drug in animals.”

This is precisely the beginning of the end of it as it turns out by the emerging of Ebola and Aids. These first vaccinations by famous pioneers were the beginning of inserting or administrating animal micro-organisms into the human immunological system.

Exchanging of micro-organisms which will change the lives of millions of Africans, because they are victims of unbridled experiments of the ruthless military, pharmaceutical and medical establishments and especially Hillary Koprowski.