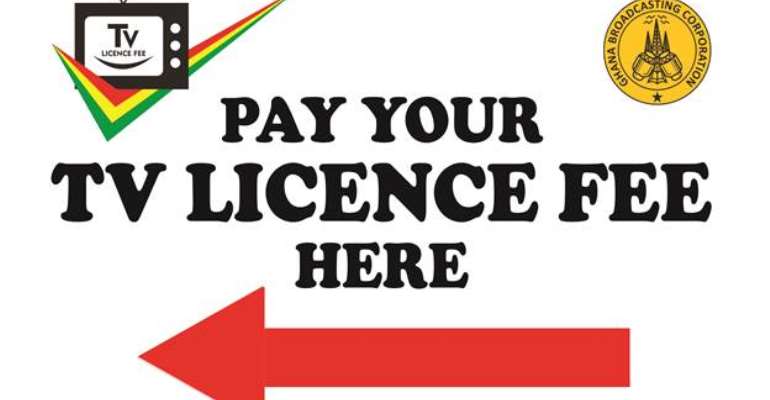 The Ghana Broadcasting Corporation (GBC) is the public broadcaster in Ghana . It is funded by broadcasting television commercials and the levying of a television license , costing GHC36.00 per annum, that is, GHC3.00 monthly for domestic and commercial users. The fee however increases if the household has two TV sets or more. The cost for more than two TV sets is GHC60.00. For dealers’ License users per month, TV repairers are expected to pay GHC5.00 whilst retailers, sales outlets pay a fee of GHC20.00.

This mandatory payment will be made compulsory to all Ghanaians by January 4th 2018. Broadcasting began in Ghana on July 31, 1935 from a wired relay station opened in Accra. The brain behind the introduction of broadcasting into the country was the then Governor of the Gold Coast, Sir Arnold Hodson, affectionately known as the "Sunshine Governor". One of the main reasons for introducing the Relay Service is to bring News, Entertainment and Music into the homes of all and sundry. This will bring to an end the barriers of isolation and ignorance in the path of progress and also to enable the people of Gold Coast to improve on their very rich cultural music (Source:Wikipedia).

Today, GBC can boost of a major nationwide television station and radio stations in all the ten regions in the country. GBC operates one television station, GTV, which broadcast news to the entire nation via satellite . Additionally, GBC operates two national and 10 regional radio stations namely Uniiq FM, Radio 1 , Radio 2 , Uniiq FM , Volta Star , Twin City Radio , Radio Central , Radio Savannah , Garden City Radio , URA Radio , Radio Upper West , Sunrise FM , Obonu FM , Radio BAR . The state media GBC runs six affiliate TV stations including GTV, GTV sports plus, GTV Govern, GTV life and Obonu TV which are greatly government financed. I think most of the affiliate stations are too redundant. With such redundancy, most individuals have expressed the need for the privatization of the Ghana Broadcasting Corporation to facilitate its operation in the aftermath of its sale. Why do I say this, mostly when I tune my television around these stations of GBC, either three out of the six stations are showing the same program or virtually doing nothing entertaining.

These are stations whose returns towards state revenue has being quite abysmal over the years. The purpose for its establishment was to broadcast to inform the good citizens of this country of matters of national concern. GBC has on several occasions failed in providing necessary information or telecasting events of relevant importance including the nation’s premier league and matches played by the nation’s national team including black stars, starlets, Black Queens etc.

Another example which indicates GBC has failed in its duty to get Ghanaians readily informed was the recent event of the Atomic junction gas explosion which occurred on the 7th of October, 2017. The first station I expected to telecast the event and get Ghanaians informed of the situation at the accident scene and to take caution was GTV and its affiliate stations. However to my dismay, I tuned to each and every TV station belonging to GBC and either I was disappointed to see them show documentary or something else. I rather got a glimpse of the explosion and heared of the news from a private TV station.

What constitute the payment of TV license? Who must pay TV license? Is the payment only made to GBC for viewing their stations, what about the other stations showing informative and entertaining programs? With the numerous TV stations managed by the GBC, not even one has being tagged to be entertaining and exciting. In most occasions, the programs you realize them showing are animal kingdoms, boring documentaries, adult education and many others which doesn’t create any enthusiasm in the youth to enjoy watching GBC channels. In the event of an accident or any natural disaster, I expect GBC channels to telecast and broadcast before any other TV station even gets hold of such news since GBC covers nationwide than any TV station does. The newly introduced TV license to be paid by every household using a TV set or more has attracted public outcry as many individuals don’t see the relevance of paying TV license to GBC. The payment is structured in a way that, even if you have a TV in the house and not in use, the owner is still entitled to make payments to GBC. Even TV repairers are required to make payments of TV license because their shops repairs and use TV sets.

The payment of TV license is not limited to age, gender or color, as much as one has a TV set, he is obliged to pay and failure attracts a court action and possible imprisonment. GBC as it stands now, in my own opinion has failed and deviated from its purpose of establishment in providing informative and entertainment services. I won’t be far from the truth if I reiterate that most of these affiliate stations by far are very boring to watch and hence payment of such license will be same as buying a gas cooker and yet continue to use your coal pot to cook. This write up is not to discourage payment of TV license but to induce in GBC and government the need to review this policy and find innovative means of making GBC channels richer and enviable to reflect value for payment of this license.

In conclusion, I strongly recommend the government to review the laws governing the payment of TV license, after all, laws are made for the people and if a greater percentage of the citizenry are against a particular law, then such law needs to be amended. Secondly, parliament together with major stake holders of the country can find other means of applying this levy or ensuring its payment either by making it inclusive of the electricity bills paid just as VAT is paid. With this, payment won’t be felt by the TV user. Lastly, GBC can also learn from other vibrant private stations and adopt innovative means of adding up to their revenue rather than to impose the payment of TV license and virtually show nothing exciting on their TV channels.