2 Suspects On Remand For Robbery 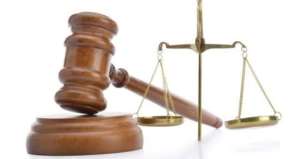 Two persons were on Monday remanded by an Accra Circuit Court for robbery.

The two, Nana Yaw Abdul Rashid and Kristin Ibrahim were said to have robbed one Francis Ainoo and Solomon Nuabaar of their LG, Infinix and Samsung mobile phones worth GH¢ 2,500.00.

They pleaded not guilty to the charges and the court presided over by Mr Aboagye Tandoh remanded them.

They would reappear on December 4.
The facts of the case as presented by Police Chief Inspector Kwabena Adu was that the complainants, Francis is a Communication Officer living at East Legon, while Solomon is a Machine Operator living at Apenkwa and both members of the Church of Pentecost, Tesano.

The accused persons Nana Yaw is a trader while Kristin is a motor- rider both living in Nsawam.

He said on November 1, at about 1930 hours, the complainants, who were in different groups evangelising, along the Santana railway line were attacked by the accused persons who took their mobile phones at knife point and bolted.

The prosecution said an eye witness who saw what happened called Nana Yaw on his phone and warned him to return the phones they had stolen, since he the witness lived in the same area and people might think that the act was perpetrated by him and his area friends.

Mr Adu said on the same day Nana Yaw returned the LG phone to the witness and together they met one of the complainants and handed over same to him.

He said on November 10, the matter was reported to the police and Nana Yaw was arrested, and during investigations he mentioned Kristin as the one who collected the Infinix phone, adding that they sold that to someone at Nsawam for GHc 200.00 and shared the proceeds.

According to the prosecution, so far, the LG and Infinix phones have been retrieved.