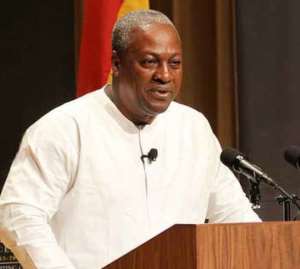 I perused through with puzzled countenance, the seemingly bizarre story about the eighty honourable members of parliament, who nonetheless deemed it fit to pay Ex-President Mahama an unannounced visit, and to urge him to return as their flagbearer for the 2020 general elections.

Apparently, I have always insisted that it is only a die-hard supporter who will shrill and thrill over former president Mahama’s comeback.

Given the rot in the erstwhile Mahama’s administration, I am not least surprised that even some concerned supporters within the NDC Party have been ventilating their arousing disgust over the anticipated comeback of former President Mahama.

Strangely,however, while the Mahama loyalists are moving heaven and earth to have him back as the party’s next presidential candidate, the sceptics are insisting that Mahama was not up to the task during his tenure in office and must thus be replaced with a capable flagbearer.

Unsurprisingly, therefore, the endless squabbling has culminated in a tug of war over the choice of a suitable flagbearer to lead them to recapture the elusive victory in the 2020 general elections.

It is, however, quite ironic that the brassbound Mahama loyalists do not want to acknowledge the fact that Ghana’s economy is in such a terrible state, because a large portion of the country’s resources went down the drain from the mismanagement and the wanton sleazes and corruption perpetrated by the officials of the erstwhile NDC administration.

With all due respect, it would appear that Mahama loyalists are living in a denial. They have indeed lost touch with the reality.

In fact, we do not have to look any further than the 2016 general elections results to acknowledge how Ghanaians have changed their voting behaviours.

Truly, it would not be farfetched to suggest that following their 2016 humiliating election defeat, the brassbound loyalists of the Mahama are going through a process similitude to Dr Elisabeth Kubler-Ross’s stages of grief.

We have, indeed, been witnessing unbridled reactive emotional responses from the diehard supporters of Mahama over the past few months.

Apparently, Dr Elizabeth Kubler-Ross developed the grief model in the 1960s to explain the grieving process.

The grief model has since been widely utilised as a method of helping people to understand their reactions to significant change or upheaval.

Dr Kubler-Ross grief model posits that a terminally ill patient for instance, would normally progress through five stages of grief when informed of their illness.

She further proposed that the model could be applied to any dramatic life changing situation, such as the NDC’s 2016 election defeat and the subsequent upheaval.

According to Dr Kubler-Ross, during the denial stage, individuals who are grieving over their loss are often unable or unwilling to accept that the loss has actually taken place.

In other words, the grieving individuals would feel as if they are experiencing a bad nightmare and would often hold an elusive conviction that the loss is unreal.

Kubler-Ross explicates that when individuals who are grieving over their loss have gone through denial stage and have thus accepted that the loss has actually occurred may enter into the anger phase. For instance, they would become extremely angry at the loss and would thus throw tantrums to evince their pains.

In the bargaining phase, according to Kubler-Ross, individuals in the grieving mood, like the supporters of Ex-President Mahama, would relentlessly beg their "leaders’" to do something about the defeat, saying things along the lines like, "We’ll not vote if you failed to bring “the former president” (or Mahama ) back ".

Interestingly, however, Kubler-Ross asserts that once it becomes crystal-clear that anger and bargaining are not going to alter the loss, individuals grieving, like the Mahama faithful, may then enter into a depression stage where they come face-to-face with the reality of the loss and their own infelicities that contributed to the loss.

During the depression stage, the grieving supporters may weep bitterly behind the scenes, and, may experience sleep or eating habit changes, or withdraw from other relationships and activities while they process the loss they have suffered.

Some followers may also blame themselves for having caused or in some way contributed to their defeat, whether or not it is justified.

Lastly, according to Dr Kubler-Ross, individuals would enter into a stage of acceptance when they have overcome their initial grief emotions. And, are able to accept that the loss has occurred after all, and cannot be undone, so once again they are able to plan for their future and re-engage in daily life or politics.

The loyal supporters of Mahama are somehow jumping the gun. They are impatiently having a tussle over the choice of a viable flagbearer for the 2020 election.

But all said and done, much as the sceptics hold the preponderance of the argument about former President Mahama’s unpopularity amongst the wider public, the diehard supporters will somehow succeed in their quest to bring back Mahama as their flagbearer if he decides to accept their invitation.

Believe it or not, the vast majority of the NDC Party loyalists are living in a denial about former President Mahama’s much touted popularity,and, will thus choose him over any other presidential aspirant.

But the question one may ask the brassbound Mahama loyalist is: where is the justification about former President Mahama’s popularity and competence when a GH9.5 billion debt former President Kufuor left in 2009 rocketed to an incredible GH122.4 billion in just eight years?

Where is Ex-President Mahama’s commitment and sensitivity, whenportions of our scarce resources were being doled out to people like Madam Akua Donkor, who as a matter of fact and observation, never contributed anything meaningful to the nation building?

How can the diehard supporters convince some of us about former President Mahama’s ability to lead Ghana again when he woefully shrunk Ghana’s GDP from $47 billion to $37 billion in five years?

How could the gleeful Mahama supporters justify former President Mahama’s suitability to lead the nation again when he abysmally dragged an economic growth of around 14 per cent in 2011 to a nauseating 3.5 per cent as of December 2016?

The Mahama loyalists must take a deep introspection and accept the fact that discerning Ghanaians cannot so soon forget the dreadful errors in judgement which culminated in economic hardships amid the unbridled business crippling ‘dumsor’.

You may believe it or not, the vast majority of aggrieved Ghanaians voted against Mahama in the 2016 election largely due to the unresolved dumsor and the unbridled corruption.

The good news, however, is that, the dumsor has since been contained by the infant NPP government under the able leadership of President Nana Akufo-Addo to the delight of discerning Ghanaians.

Judging from the unbridled sleazes and corruption in Mahama’s coarse administration amid harsh economic conditions, it will take a miracle for discerning Ghanaians to vote former President Mahama in 2020.