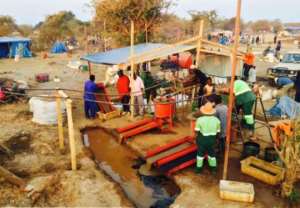 The Ghana National Association of Miners has expressed its determination to switch from the use of mercury to mercury-free technologies in processing gold ore and, therefore, asked government to invest in mercury- free methods.

They asked government to support the University of Mines and Technology (UMaT), Tarkwa, to produce large quantities of the Retort lantern and Direct Smelting technologies so that artisanal small-scale miners could use them for processing gold ore.

The miners expressed these concerns at a Consultative Forum organised by the Friends of the Nation, an environmental non-governmental organisation, in Accra, on Wednesday.

The meeting brought together miners and mine-owners, to discuss the dangers of mercury usage and solicit their views into the development of a National Action Plan on the Minamata Convention on Mercury.

It was organised in partnership with the European Environmental Bureau, Zero Mercury Working Group under the Africa and Caribbean Pacific Initiative, aims at increasing the knowledge of miners on the Minamata Convention, expand the debate on the transition from the use of mercury to mercury-free technologies and solicit their feedback towards developing an Action Plan.

The miners said there should be a central point for processing gold ore so that the regulatory authorities could monitor the use of mercury in order to avoid pollution of the environment and other health risks associated with its usage.

They said there should be some modification to the existing gold processing methods to use mercury-free devices, develop specific technologies for processing different types of gold ore across the nine mining districts in Ghana.

Mr. Godwin Armah, the General Secretary of the Ghana National Association of Small-scale Miners, expressed delight for involving the Association in developing a National Action Plan on Mercury usage and noted that in the past mining associations were ignored whenever government was developing a mining policy.

He expressed optimism that the Action Plan would address realities on the ground and ensure effective implementation since the key players in the mining industry were involved.

Mr. Armah suggested that gold buyers should be involved in the mercury sensitisation drive since some miners send their amalgams to them to burn them and thus, exposed them to health risk.

He appealed to the government to lift the ban on small-scale mining activities so that those with mining licences could mine within the remit of the law.

'The ban has affected the local economies of most mining communities because miners are losing their investments and crime rate is gradually rising in those areas so government should do something about the moratorium,' he said.

Mr. Solomon Kusi Ampofo, the Programmes Manager in charge of the Extractives at the Friends of the Nation, said the consultative meeting was necessary to solicit inputs from the Ghana National Association of Small-scale Miners in developing the Action Plan on Mercury in order to get their support during implementation.

Some topics treated at the forum included Overview of Friends of the Nation's Work on Artisanal Small-scale Mining and Mercury Management, Mercury and its impact on human health and the environment, the Minamata Convention and status of Ghana's implementation.

Other topics include Mercury Trade and Supply, Overview of Legal and Regulatory Framework and Available Technologies for reducing mercury in Artisanal Small-scale Mining Sector.

Countries that have signed onto the Minamata Convention require to develop an Action Plan within three years of ratification of the Convention and indicated specific strategies in reducing the quantities of mercury used in artisanal small-scale mining, develop baseline inventory, information and awareness creation and adopting technologies that are mercury-free.