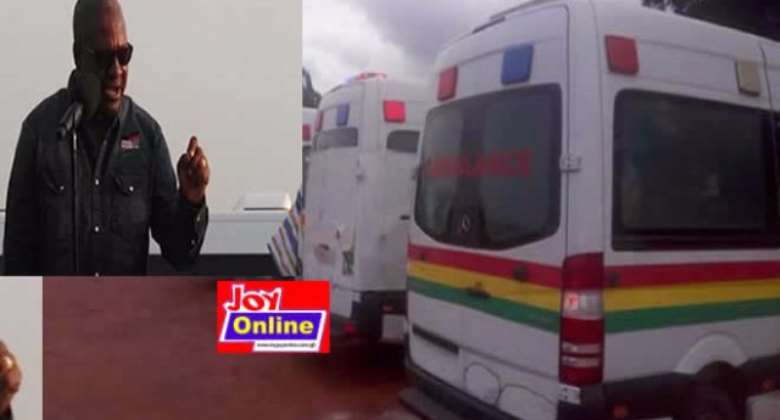 It has emerged that the previous administration led by John Mahama directed the Finance Ministry not to pay for the delivery of 30 defective ambulances procured in 2014.

According to National Democratic Congress (NDC) MP for Tamale Central, Alhassan Fuseini Inusah, the government then, had identified that the vehicles were not fit for the purpose.

The revelation has provided fresh information for further probe into why the government single-sourced the contract to a one Richard Dzakpa, a former aide of former National Security Coordinator, Joseph Nuno Mensah.

Information Minister, Mustapha Hamid indicated earlier on Newsfile on Joy FM, Saturday, that the contract which was entered between the government and [email protected] in 2010, did not go through any competitive bidding process.

Mustapha Hamid
“Richard Dzakpa of [email protected], was just asked to supply these ambulances to the Ministry of Health,” Mr. Hamid disclosed.

The company then approached a foreign dealer, Big Sea, which then chose [email protected] as its local agents.

He added further, soon after the arrival of the vehicles into the country, a report on a technical examination conducted on the vehicles in 2015 by global automobile manufacturers, Mercedes Benz, detected as many as 18 different defects on all the vehicles.

The technical report dated February 10, 2016, advised that the government is better off using the vehicles as 13-seater mini-buses because they were not suitable for conversion into ambulances.

The report by the German automobile company also described the electronic gadgets fitted in the vehicles as dangerous and "are of very poor quality".

Another report dated February 15, 2015, from a similar examination by technical officers from the National Ambulance Service produced virtually same outcomes.

The Information Minister said, Big Sea later shipped the remaining equipment to be fitted in the vehicles but a legal tussle between Big Sea and [email protected] further stalled the installation process.

Interestingly, however, the government had on August 12, 2014, issued letters of credit for the payment 50% of the cost of the vehicles totaling almost 4million Euros, a year before the technical report reached the government.

The government approved the payment of bank charges in excess of GHÈ»806,000.

The non-payment order
A member of the previous administration, Inusah Fuseini was surprised as to how the payments were made because the President then, John Mahama had ordered the “payment should not be effected” because “they were substantially not fit for purpose”.

Charging the state to retrieve payments made for the letters of credit, the former Roads and Highways Minister conceded that, “This transaction has more questions than answers”.

Inusah Fuseini
His colleague, Alex Segbefia who took over from Benjamin Kumbuor at the Health Ministry during the Mahama administration told Joy FM earlier in the week that the fear of judgement prevented him from abrogating the deal.

But Mr. Fuseini was dissatisfied with that reasoning indicating, Alex Segbefia should “have sought the advice from the Attorney-General” when he found himself in two minds.

"What judgement debt are you going to suffer?" when you ordered for rice but you are supplied maize?, he analysed.

He also criticised current Health Minister, Kweku Agyemang Manu making unfounded claims that vehicles had been paid for while he could not provide any documentation to support that claim.