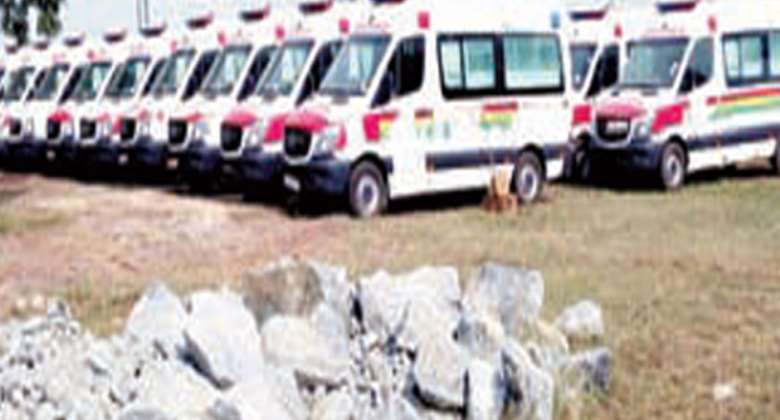 Details are emerging about how the contract awarded by Mahama's National Democratic Congress (NDC) government for the procurement of some 30 ambulances estimated at €2.4 million, landed in the hands of one of the NDC's foot-soldiers.

The sole-sourcing contract was said to have been awarded during the time of Alban S.K. Bagbin as Minister of Health, to an aide of former National Security Advisor, Brigadier General Joseph Nunoo-Mensah (Rtd), called Richard Dzakpa, in 2010.

Dzakpa, who is believed to have no expertise in the procurement of sensitive health equipment, was said to have purchased the Benz ambulances from Dubai instead of Germany, where the vehicles in question are manufactured.

However, the ambulances have been found not to be fit for the purpose for which they were acquired, although Ghana paid a whopping €2.4 million for the transaction; and the manufacturers had recommended them to be used as 'trotro' (commercial vehicles).

Even though the previous government at Cabinet insisted it wouldn't pay for the buses, it ended up paying the money without knowing the recipient.

'Trotro' Ambulance
Information Minister, Mustapha Hamid, said on Joy FM at the weekend that the current government's checks from the manufacturer of the vehicles (Mercedes Benz) showed that they (vehicles) were ordinary 13-seater passenger buses known in local parlance as 'trotro' and not ambulances as the supplier made the government to believe.

He said a technical examination conducted on the vehicles delivered to the government in 2014, revealed as many as 18 defects, making them unfit for the initial purpose.

200 Ambulances
It turned out that Mr Richard Dzakpa, who operates a firm called Big Sea Company, was given a contract to procure 200 ambulances for the health ministry and the initial 30 he supplied cost the taxpayer €2.4 million.

According to the minister, the NDC government also approved the payment of bank charges in excess of €6,000, although it (government) had rejected the ambulances and as a result, the payment should not even have been done.

Segbefia Factor
When the news broke about the bad ambulances, the immediate-past Minister of Health, Alex Perceval Segbefia, under whose tenure the payment was believed to have been done, distanced himself from the scandal.

As if possessed, the former minister quickly granted an interview to Citi FM in Accra on Wednesday saying, “No contract was signed under my tenure. People keep forgetting that I was the minister for 18 months and there were seven ministers over an eight-year period so no contract or no financial arrangement was done under my tenure as minister.

He, however, charged the government to ensure that the ambulances are cleared from the port and used effectively.

He said, “I welcome the investigations that the minister wants to embark upon, but while the investigations are ongoing, it is also important to see how quickly we can get the equipment out of the port. Let's kick out the ambulances and let's deal with what has gone wrong. Let it not be like a situation with the gallopers which were left for years to rust.”

Direct Contradictions
Surprisingly, the same Mr. Segbefia had rejected the first consignment of 30 ambulances, which arrived in 2016, when he was health minister, saying at that time they were substandard but when the current minister Kwaku Agyemang Manu, blew the cover, he (Segbefia) is now asking the government to clear the ambulances and use them.

The unannounced visit was to interact with the health workers and take note of their institutional challenges.

The minister said that his outfit had referred the matter to the Economic and Organized Crime Office (EOCO) for further investigations.

Mr. Agyemang-Manu told journalists on Wednesday that in the course of the transition, it was detected that the ambulances, meant for the National Ambulance Service (NAS), were supplied but the ministry did not accept them because of the specification shortcomings – even though they were paid for.

Enquiries by the ministry's new leadership revealed that the €2.4m had been paid through a Bank of Ghana (BoG) transaction to the supplier of the ambulances, although they were rejected for being below the standard of NAS.

The 30 vehicles, purchased at the cost of €80,000 each, were part of the 200 ambulances the Ministry of Health purchased last year to augment the fleet of NAS in its emergency health response countrywide.

However, inspections carried out by NAS after delivery of the vehicles showed that the 30 did not meet the standard and were therefore rejected by the government, which meant that until they were replaced, they would not be paid for.

Inconsistencies
Mr. Agyeman-Manu said his office, upon receiving the information about the payment, followed up with the contractor – Big Sea Company – only to discover that the company had no idea that the 30 sub-standard ambulances had been paid for because the company's account had not been credited with the money.

“They brought the proposal and they rejected them during the transition. The report we are getting was that the supplier supplied, they never accepted, but the ambulances have been paid for,” Mr. Agyeman-Manu said.

How can you blame NDC for Akufo-Addo’s “away away!” humiliat...
13 minutes ago