Message To The Job-Seeker: Don’t Ever Do This!

I seem get a lot of messages via LinkedIn from folks, who essentially are looking for employment opportunities. I am usually gracious and empathetic in my response because I know how tough it is out there being without income. But this one particular request I had the other day from a young man (Let’s call him Kofi for now) was both funny and sad at the same time. "I need a job oo, sir pls help me!" he said. It gave me a good laugh because coming from the same cultural perspective, I sort of understood the depth of frustration that produces exclamatory expressions such as "oo".

But it was also sad on two levels. First, the state of joblessness is alarming, no doubt. I have written many of articles about public policy questions that bother on program effectiveness and its impact on reducing unemployment. I have written about cultural barriers that discourages young people from taking the entrepreneurial path. Addressing supply-side constraints is all well and good. But I have also observed a worrying trend where people who cry out “I need a job” are really saying something different. What they really mean is... 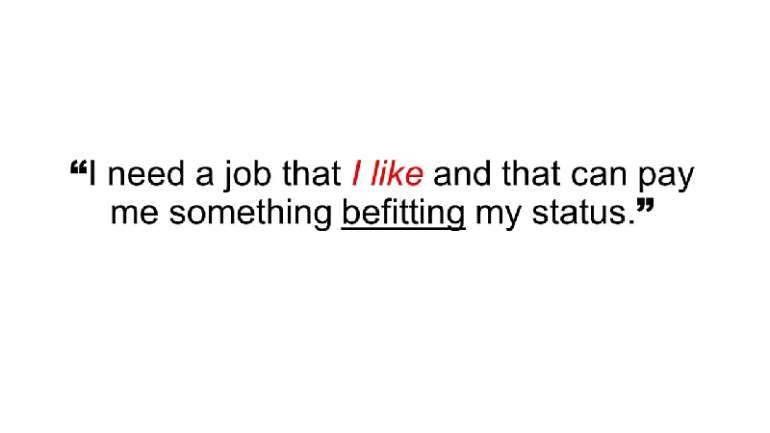 Let’s face it, there are jobs out there! I encourage you to take a cursory tour of at least 3 recruitment sites right now and I guarantee you that jobs related to sales and marketing far outweigh all other functional categories. In fact, as at 5.47pm on May 7, 2015 Ghanacurrentjobs.com had 1,733 sales/marketing jobs recorded since its inception. The second highest is accounting/auditing (1,344). This trend is consistent on most recruitment sites. Just check. The problem is a lot of fresh graduates don’t like sales! Let’s be blunt. So yes, there may some unethical predator companies out there who have some stringent commission policies, but by and large, the problem is the unemployed person. Let’s not fudge the issue. I know this is not a popular position to take (thank God am not running for political office) but the conversation about unemployment must have some candor to it. There are too many with a sense of entitlement running around.

Here is the response I gave to the young man: 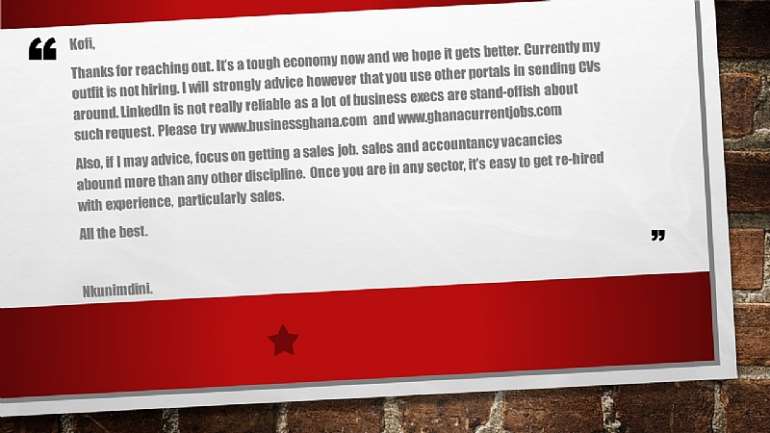 I know full well my advice my fall on deaf ears. It won’t be the first time. I have sent a lot of CVs to places on people’s behalf for sales vacancies. Some of them passed the interview but declined the job offer. “I don’t like what they were offering”, they would say. They don’t like the fact that the hiring company won’t pay them regular monthly income but commissions, after they bring in revenue. They don’t like the fact that sometimes they may have to find money to fund their own sales activities and hopefully receive commissions if they succeed. Well, all the best then -because guess what, life is all about selling. I have started and exited 4 companies since 2007. Two were nonprofits and the other two were in real estate and consulting respectively. In between I was engaged in regular employment. Without romanticizing it, I will say I failed at them. Why? It took me a while to figure this out. If we are to boil it down to one thing, I would say that I sucked at sales. I couldn’t sell my vision to investors for capital. I couldn’t sell my ideas to donors for grant. I couldn’t sell my services to companies that clearly had need of it. Heck, I couldn’t even sell my dream of becoming an entrepreneur to my family for support. But now I know better. What am I saying? Young people, particularly fresh graduates, should be thankful there are sales jobs. It’s a training ground for leadership in the corporate sector and indeed for anyone with entrepreneurial ambitions. If you don’t have a job now, get into sales. You will thank me later.

The second thing I found sad about Kofi’s request was borne out of curiosity. Let it frame it in a question form. What quality of education would one have to get to appreciate the difference between LinkedIn and Facebook? Don’t get me wrong, this is not a trick question nor a rhetoric one. It seem pretty intuitive to me that when you want something as important as a job, the least you could do is to approach the situation with some formality and aura of gravitas that gives a good first impression. This is the tragedy of a social media generation. The boundary between formality and informality is not sacred anymore. To use LinkedIn as though it is Facebook when searching for a job, is to confuse accessibility for social chumminess. If you want to use LinkedIn contacts as part of your job search strategy, be sure at least to pay attention to message construction.

Rule number 2: Don’t say “I need a job”. It makes you sound desperate. No one is attracted to desperation. It’s better to summarily mention your background and skillset and then ask for leads about vacancies. That’s more professional.

Rule number 3: Don’t forget rule 1&2.
The Ghanaian labor market is fraught with many problems; discrimination, unethical recruitment practices, saucy HR people with god complex, etc. Don’t make it worse by polluting the atmosphere with your sense of entitlement. Take that sales job and learn on the job. Become the best sales person and see what happens to your career. You will thank me later, I guarantee you.

There, truth in its unadulterated form. Now you are free to vote against me.

Come Out In Your Numbers And Vote Massively For NPP – Akufo-...
23 minutes ago