Sadly, The 2017 Budget Statement Didn't Mention Galamsey Even Once! 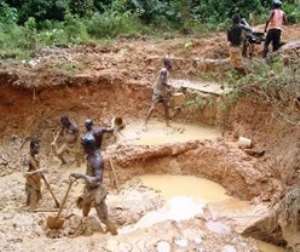 The 2017 budget statement read to Parliament and the nation by the Finance Minister, Mr Ken Ofori Atta, on 02 March 2017 can be described as a a very competent and optimistic one.

QUOTE: “The balance of payments (BOP) turned surplus for the first time since 2011, due to [an] improved current account balance. Accordingly, there was a build-up in gross foreign assets, which supported the relative stability in the exchange rate.

I am impressed that the Minister did not seek to hide our relatively good external account situation in Tables in the appendix to the Budget Statement (since the figures reflect rather well on the John Mahama administration's effort to bring the economy under control in 2016.) I hope the Minister will continue with this policy of being honest about the economy. You can't quite hide an economy, yet some Finance Ministers foolishly pretend that they can “talk up” an economy even as it totters to the ground.

The Minister's tax reductions were also a good sign that he has his ears to the ground. No wonder he is being serenaded in the markets by the Kayayei. I wouldn't like to be in the position of his wife, at this rate!)

I was also impressed by the Minister's willingness to share with the nation, certain figures that, hitherto, have tended to reside mainly in the vaults of the finance ministry and the Bank of Ghana.

Figures of this nature should help to create optimism in the populace. We are getting this oil money at a time when oil prices are low on the international market. If and when oil prices improve, we most certainly can look forward to walking tall again. Even if we are only able to produce enough petroleum to meet our local needs, we should count ourselves lucky, for expenditure on petroleum imports is one of the driving forces of our decline into poverty as a nation.

.
The Minister also – very commendably – told us the situation with regard to the prices we can expect from two of our main exports – cocoa and gold. This is something that has not been prominently depicted in official statements on the economy in recent years. The Minister said:

Of course, the cocoa farmers will be entitled to demand that the greater part of the slightly less than $100 per tonne increase in the world price will be passed on to them. In this connection, I would like to draw the Minister's attention to the fact that the Ghana Cocobod spends far too much of our earnings from cocoa on just administering the exportation of the crop.

The way the Cocobod borrows heavily from external sources to buy the crop each year is also not in the best interests of the country. The loans attract a relatively high interest rate at a time when interest rates are very low the world over. Some Ghanaians suspect that the loans, in fact, do bring a lot of “commissions” to the “Yennkye nni” [Let's share it and eat!] lot who arrange them.

Maybe the Government should, in fact, carry out a thorough review/ audit of the Cocobod's operations. This has been left undone for years, because, fear that the Board might perform badly if it is interfered with, has made successive Governments leave the Cocobod virtually untouchable, although we all know that untouchability is a dangerous lever to corruption in a conscienceless society like ours.

Indeed, the time has come for the Government to examine the very raison d'etre of the Cocobod.

Why should we maintain a Cocobod that was established by the colonial Government in 1947 for its own nefarious purposes? Given the huge overhead costs that the Board recoups from the “operation allowance” given to it by the Government from our earnings from cocoa exports, is the Cocobod truly cost-effective?

Beyond that is the question of doing justice to the cocoa farmer. Fishermen sell their catch themselves through the open market. So do plantain farmers, cassava farmers, citrus and pine-apple farmers, and other agricultural producers.No marketing board intereferes with their operarions. So why should cocoa farmers alone be singled out and be made to serve as the unacknowledged labourers of the Cocobod (and by implication, the Government?)

The inherited system is convenient to the Government, to be sure, but an injustice cannot be perpetuated because its imposition was convenient to the dictator who imposed it. With modern data systems in existence that are capable of capturing sales, the main argument that the Government cannot collect taxes from cocoa farmers unless the Cocobod, a Government agency, sells their crop, is untenable and extremely backward. Can you see the German Government selling BMW and Mercedes cars for the manufacturers because they pay such huge taxes and the Government wants to take it at source? Or the French Government selling wine for the producers?

“FREE THE COCOA FARMER” I say to the Government. Otherwise its claim to be a liberal, business-friendly” Government, will be just hypocritical hot air.

The ECOWAS Common External Tariff system, which Ghana has joined, will (the Government recognises) be a “a major platform for the establishment of [a] Customs Union... and help address problems such as cross-border smuggling and dumping in the sub-region”. Surely, the elimination of smuggling should serve as a further incentive for the Government to allow cocoa farmers to sell their own crop?

“Change has come!” NPP followers believe. The Government says it's in a hurry to transmit the effects of that change to the ordinary people. It should therefore not waste any time in turning the “change” into reality for our cocoa farmers.

Another aspect of the budget that disappointed me was the Minister's inability to even outline or highlight the steps the Government plans to take to fight our biggest national calamity of the moment – galamsey.

If the Government as a whole does not make the anti-galamsey crusade its major plank, it will wake up one day to find that all our water-bodies are dead and that whatever social changes it seeks to bring to the rural areas – such as"one district one factory" – will be dead in the muddy-water, so to speak, and be still-born.

You just cannot mess about with your people's drinking water. Mr Ken Ofori Atta mentioned his own pedigree, and that of his boss, President Akufo Addo, in his introduction to the budget statement. That pedigree carries a message back to them, namely, that the River Birem, which nurtured them when they were babies, must not be allowed to die. Right now, it is in its death-throes and crying out – like the Prah, the Offin, the Oti, the Tanoh, the Densu and many other rivers in Ghana -- Grand-children of the Oforipanin Stool, now that you have got power, do not turn a deaf ear to the cries of agony of your country's Sacred Rivers! If YOU of all people close your ears to our cries, to whom shall we turn next?” Would Danquah allow it? Would Paa willy allow it? Would Barfuor Osei Akoto allow it?