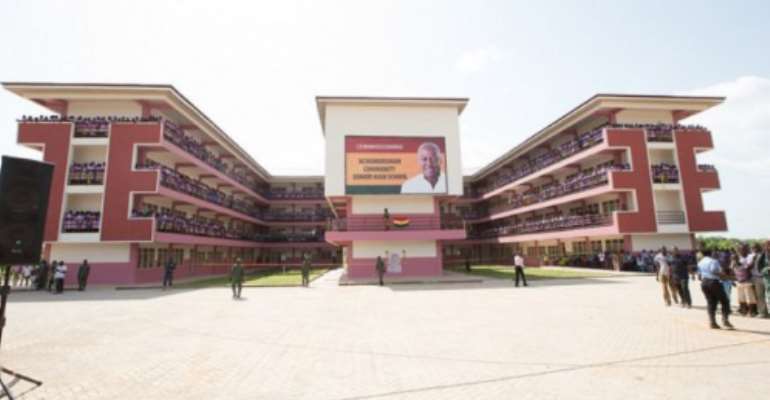 You see, some people in the NPP have elected to convince themselves that the title opposition they are bearing is sweet and they want to maintain that.

Why am I saying this?
In the multiparty dispensation in serious jurisdictions, opposition parties put alternative policies on the table for the resuscitation of the national economy.

They criticise government constructively to keep government on its toes and so on and by so doing, they are able to capture power.

Unfortunately in our jurisdiction, the NPP has reduced everything into an activity which has become a preserve for cacophonous noise makers.

They pooh-pooh everything and anything government does and says as far as they are not in government without any basis.

Are they not happy with their title as opposition?
In certitude, they are!!!
Few days ago, Bismark Agyei Okyere-Darko, a friend who I have always conceded that I respect a great deal, posted one of the prestigious E-Schools being built by the NDC government and the text that came in accompaniment with the photo was nothing but a derision and a total run-down.

Some of their leaders have sought to make a ridicule of the project and ostensibly subject government's effort to unmerited public obloquy.

You see, this attitude is not happening for the first time.

You would recall that their antecedents did it to Dr Kwame Nkrumah.

You would recall that when Nkrumah built the State House which today houses Parliament, they ridiculed it and said it would sink in six months.

Up until today the State House still stands and still housing parliament.

If what they said at the time was true, then the State House would have been sunk deep into the ground, but Job 600 still stands tall!

Again, when Nkrumah built the Tema Motor Way, they said it was too prestigious and that Nkrumah had wasted our resources on that project.

The same thing was done when Nkrumah built the Akosombo Dam.

As part of their reckless opposition to Nkrumah, they were collaborated to bomb the Akosombo Dam.

I would leave it here and talk extensively about the Day Senior High Schools being built by the NDC government.

Again, history has it that it was the Nkrumah government which expanded access to Secondary education greatly under the supervision of a minister called Kojo Botsio.

Apart from that, it is the Mahama government which has done the unprecedented as far as access to Secondary education is considered.

It was not for levity when a whole local Chief said the schools are very magnificent to be secondary schools. To him, they even qualify to be universities. I agree totally with him.

By estimation, at least 3000 students have enrolled.

Now, but for these schools, where would these students have been? It tells you that these schools have benefited people GREATLY!

Apart from increasing students' enrolment and expanding access to education, these schools provide casual jobs and permanent employment to people.

When students congregate, they will be fed. So it makes a great contribution first to agriculture. Carpenters, masons, electricians, plumbers and drivers are employed.

Food vendors are hired.
In the light of these advantages, what gives them the locus to talk down on these projects?

If this is not wizardry, then what could be more demonic?

That is why Nkrumah describes them as agents of neocolonialism and traitors.

This is my submission today.
Thank you!!!
OSUMANU ABUBAKAR
©ALL RIGHTS RESERVED!!!