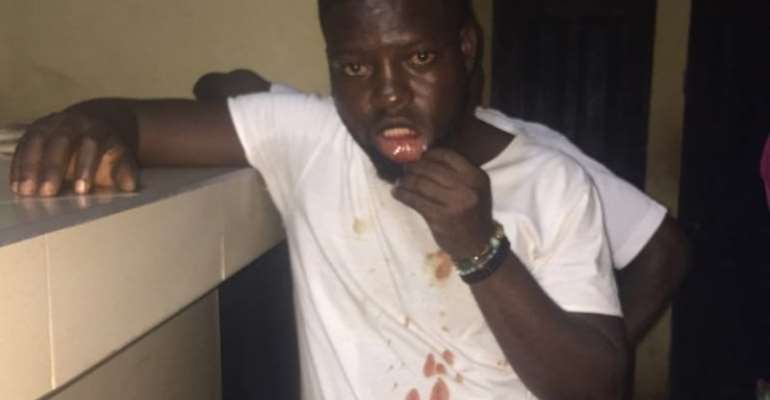 Abeiku Newton at the Police Station

Tension is heightening in the Weija-Gbawe constituency of the Greater Accra region as New Patriotic Party (NPP) supporters allegedly beat up some youth of the ruling National Democratic Congress (NDC).

According to some injured youth of the NDC, they were attacked when the main opposition NPP embarked on a “placard campaign” in the New Weija Township over the weekend.

Speaking to Starrfmonline.com, Abeiku Newton, 30, who sustained mouth injuries, alleged the attack was instigated by one Patrick Kumah, the campaign manager of the NPP MP-aspirant Tina Mensah.

“We were here minding our own business when they (NPP supporters) came for their placard campaign. In order to avoid confrontations we even moved away to where we call “Wembley Park”, and started doing what we do when we are usually together, by singing songs about Obuobia (the NDC parliamentary candidate),” Newton said.

“In less than an hour, we saw a car being driven by Patrick Kumah, the campaign manager of Tina with some land guards. One of the land guards just walked straight to me and before I could open my mouth he slapped me and punched my mouth.”

Newton has been given medical treatment and has since reported the case to the Mallam Police.

When Starrfmonline.com contacted Madam Mensah and her campaign manager Kumah about the incident, they both denied having a hand in the clash.

“I was informed they (NDC) rather beat up my boys when my volunteers went out on a placard campaign. Someone on a motorbike stormed the place and started throwing water at them so how can it be the other way round. What kind of intimidation is this,” Mrs. Mensah stated.

Kumah added: “It was a scuffle which ensued distance away from where we were. It was at a drinking spot. I didn’t drive any land guard to beat up any NDC member. It was later in the morning that I heard about the scuffle.

“They are all lies and it won’t wash. If the guy is saying he saw me with land guards then let the police pick me up. Where we have gotten to with our campaign no one is interested in this sort of politics.”

The police have confirmed a case of such nature has been reported to them, but are investigating.