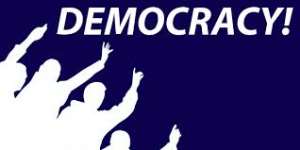 Democracy according to my Merriam-Webster dictionary is an act of governance in which the supreme power is vested in the people exercised by them directly or indirectly through a system of representation usually involving periodically held free elections.

Accordingly, democracy has lots of attributes which includes free speech,movement,disagreement in the exchange of views, acceptance of opposing views and moving forward for the common good of those who accscribed to its practices etc.

Disappointingly, in this part of the human existence on the western part of Africa precisely Liberia the practices of democracy is not actually understood by the majority of its citizenry in almost all of its implementation which characterized this foreign understanding of mankind existence for the best!

Liberians, in majority understanding of what is known as voting which says that the supreme power is vested in them are numerous but for the sake of this writing let’s limit ourselves to how and why larger portion of the population consider a given candidate in their understanding should or must be voted for.

In most of the elections processes, I have witnessed in contemporary Liberia are based on personalities and not on issues relative to the betterment of their well-being in a Nation that often boast of being the oldest so-called independence African nation and have never taken the front bench in championing the actualization of democracy!

I vividly recalled, the days of the military junta when this stage electoral process was initiated by them the slogan sung by Liberians across the divide was native women born soldiers and criminal born so-called educated class at the time! Then came the time of the Charles Taylor electoral era that too was characterized by slogan such as you killed my ma you killed my pa I will vote for you!

And disappointingly, this current regime the electorate took on with the slogan that the people suffer too long behind this thing let’s give it to them since they are the best educated ones of our time disregarding the issues that continues to keep this Country backward despite all of her best ever showcase in term of stewardship from the military to the educated gurus since her existence as a Nation!

Then to the other components, of this democracy issue precisely the free speech and tolerance aspect of the Liberian society, from all indications Liberians in general pretend to be lover of free speech and been tolerance which require mature minds! From the grass root level research has proven that the act of accepting other views no matter how contrary it may sound to their understanding even their too is not palatable to other but yet he or she want the other to accept their!

In many cases, Liberians don’t often encourage healthy debates gear toward intellectualism but rather deal with personalities completely outside the practice of what they referred to as democracy even in this dispensation that many considered the most civilized era in the Liberia’s history!

The Liberian society, is as such that intolerance has taken center space in the life style of the people to the extent that people become very weary of their own families,religion,traditions,the govern and those holding trust in public offices for the slightest reasons that could’ve require mature approaches thus driving the entire Nation to vindictiveness’! Lack of understanding the practice of democracy!

People from around the globe in my interaction with them, thought that after Liberia’s ugly pass her inhabitants will let go these ugly vices that has and continues to destroy every fiber of the Liberian society and allow these experiences to be the stepping stone to learn from in building up a vibrant society allowing all of the attributes of democracy to be the watch word but it is the contrary!

In my previous paragraph, concerning democracy in which the people accordingly have the vested power in them with the electing power as well will make good those things that ought to redirect this Nation Liberia wheels in making sure people assuming leadership are well vested and allowing them to go through fire as gold when it is refine in other to give that brilliant shine!

Then continually giving in, due to this abject poverty that has reduce Liberians to their kneels which is also the root cause of the now in their lives than the substantive issues that are lingering in their faces as part of their democratic responsibilities’ in making sure that act of democracy work to its fullest for God sake as Liberian are still in the learning curve when it come to the practices of democracy!

Ghana’s economic woes has nothing to do with E-Levy; just st...
33 minutes ago