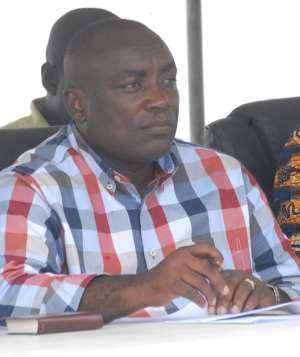 Is it not said, “By the fruits of the tree shall ye determine the type of tree it is?” and “by his actions shall ye tell his character?” Kwabena Agyepong is noted to have been far too wicked, disrespectful to the structures and authority of NPP, full of himself and very controversial.

By his actions and words, he is presumed to be an NDC mole planted in NPP to cause NPP’s defeat in election 2016. The defeat of NPP will aggravate the hardships faced by the majority of Ghanaians under the clueless, incompetent, corrupt and overwhelmingly tribally-biased administration led by President John Dramani Mahama.

As it is said, “When the die is cast there is no turning back”, so has Kwabena Agyepong’s actions identified who he really is to many a Ghanaian. The mere mention of his name is anathema in some households; it is now a blemish on the intelligence of not only NPP but also, a shame to the suffering masses of Ghanaians who urgently need a change in their lives for the better through a change of government.

By his previously arrogant and stubborn stance on many issues, same being detrimental to the cause of NPP and the expectations of many Ghanaians, his reported remorsefulness before the NPP Disciplinary Committee and his subsequent apology to Ghanaians and NPP is taken with a pinch of salt.

The harm is already done and once bitten, twice shy. How can we prove that he is not only shedding crocodile tears, as sly as he is noted for but shedding genuine tears? What then is crocodile tears? “Crocodile tears (or superficial sympathy) are a false, insincere display of emotion such as a hypocrite crying fake tears of grief. The phrase derives from an ancient belief that crocodiles shed tears while consuming their victims.

While crocodiles do have tear ducts, they weep to lubricate their eyes, typically when they have been out of water for a long time and their eyes begin to dry out. However, there is evidence that this can also be triggered by feeding”.

Whether Kwabena is being sincere or false by his apology, he has to be suspended same as Paul Afoko has been. It is hard for many to believe that he is not only pretending now that the nook is closing tightly upon his neck. Many a time, a bad person still remains bad no matter what treatment and counselling are given to them. However, there are also known instances where bad persons have reformed to become good persons. In this situation of uncertainty in the determination of Kwabena’s true state of character towards NPP as to whether he has genuinely repented for his actions or is still the wolf clad in Lamb’s skin, we need to tread cautiously to arrive at the best decision.

In order not to give reason to the false allegation that NPP is an Akan party even though nobody is known to have been rejected membership to the party on the grounds of not being an Akan, Kwabena has to be suspended same as Afoko, a non-Akan was. Both of them started the same deplorable character and exhibited the same level of unreasonable wickedness causing division and chaos in the party. By their actions, they were both in the same boat championing the cause of the rumoured AGENDA 2020 meant to maintain President Mahama in power until the year 2020 while causing the defeat of NPP and Nana Akufo Addo in election 2016.

The only difference between the two self-styled giants in NPP is that while Paul Afoko was purely stubborn, mired in his own intransigence without showing respect to anyone, refusing to honour invitations to appear before the NPP Disciplinary Committee and other higher bodies, Kwabena Agyepong did the contrary. He did appear and continues to appear before the Committee when summoned. He shows remorse and does apologise. Whether he is being genuinely remorseful or not, the fact still remains that he has shown remorse.

In a court of law, the show of remorse is a mitigating factor. Two persons can be charged with murder of someone. In the course of the court proceedings, he who shows remorse for their actions, between the two murderers may be given a lesser sentence than the one who remains stubborn throughout the hearing thinking what he did was absolutely right even though, it was not committed in self-defence but purely an act of criminality.

Again, before a jailed criminal is let out on probation, he/she should have proved themselves reformed rather than still being same wicked fellow before they sent to prison to serve a jail sentence.

As I do not advocate for Kwabena Agyepong to be left in his position as the General Secretary but to be suspended same as Paul Afoko was, I beg to differ from the emotional views amid threats of resignations from the NPP being expressed by some members should Kwabena Agyepong be pardoned. Being forgiven his sins (pardon) does not equate to maintaining him as the General Secretary. We need to understand this fact.

It is about time we educated ourselves as intelligent persons seriously championing a political cause. How do we win votes and sympathisers to our camp if we behaved so divisively, engaged in arguments that are devoid of substance?

How does reporting that Kwabena Agyepong has begun to respect the party by attending all invitations and apologising turn the reporter into an enemy? Was Nana Akomea asking for Kwabena Agyepong to be pardoned because he has apologised or he was only reporting the current attitude of Kwabena Agyepong? Why should he then become our enemy for telling us exactly what is going on?

I shall advise that my fellow NPP members will learn to understand politics and the best strategies for winning elections or disseminating our campaign messages than just letting themselves be carried away by emotions that culminate in heaping insults on others that are correctly or wrongly deemed as enemies or political opponents.

For the attention of NPP members and sympathisers, please note that insults will not win us the votes we so desperately need to unseat NDC from the presidency and government but putting across our policies truthfully and intelligibly convincingly will.

To clear the doubt from the minds of people as to what NPP is, whether an Akan or a multi-ethnic-based party, Kwabena Agyepong is a GONER! He has to accept his final suspension in good faith to bring back smiles to the face of the Agona clan members. We do not want to have such a bad son who will make the fate of many Ghanaians a hell but are ready to welcome the prodigal son back home.

When he is suspended, he can help the party by working from the fringes as an ordinary member same as his father, Rockson Adofo, is doing, to prove that he really cares about the party and the suffering Ghanaians. If he refuses to help when suspended, then to him I say, his apology was not genuine but fake.

Finally, I shall advise that we do not allow Kwabena Agyepong’s current attitude to set fire to NPP, dividing us but to rather unite us. Paul Afoko can demonstrate his love for the party by showing remorse, apologising and working as an ordinary party member to bolster the chances of NPP winning election 2016 same as many of us are doing.

Covid-19: 5G Network Is Not The Cause – NCA To Ghanaians
38 minutes ago