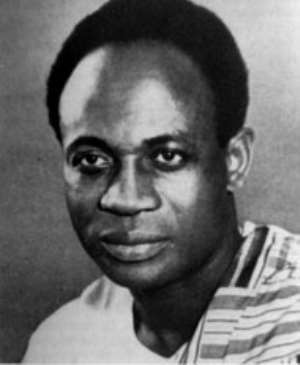 A General Ankrah Quote: “Nkrumah's place in African history has been assured.”

A Nyerere Quote: “Time has shown that Nkrumah's dream of African unity was not an ideally romantic idea. Since then Europe via the EU has adopted his [Nkrumah's] entire proposal apart from the one on a union of government. The current AU structure was modeled on his proposal.”

An Nkrumah Quote: “Divided we are weak; united, Africa could become of the greatest forces for good in the world.”

We continue with the concluding part of Nyerere's March 6, 1997 Accra speech. Please read on:

CONFESSION AND PLEA
So my remaining remarks have a confession and a plea. The confession is that we of the first generation leaders of independent Africa have not pursued the objective of African unity with vigour, commitment and [the] sincerity that it deserved. Yet that does not mean that unity is now irrelevant. Does the experience of the last three or four decades of Africa's independence dispel the need for African unity?

With our success in the liberation struggle, Africa today has 53 independent states, 21 more than those which met in Addis Ababa in May 1963. [With South Sudan's independence in 2011, Africa now has 54 independent states.] If numbers were horses, Africa today would be riding high! Africa would be the strongest continent in the world, for it occupies more seats in the UN General Assembly than any other continent.

Yet the reality is that ours is the poorest and weakest continent in the world. And our weakness is pathetic. Unity will not end our weakness, but until we unite, we cannot even begin to end that weakness. So this is my plea to the new generation of African leaders and African peoples: work for unity with the firm conviction that without unity, there is no future for Africa. That is, of course, assuming that we still want to have a place under the sun. I reject the glorification of the nation-state [that] we inherited from colonialism, and the artificial nations we are trying to forge from that inheritance.

We are all Africans trying very hard to be Ghanaians or Tanzanians. Fortunately for Africa, we have not been completely successful. The outside world hardly recognises our Ghanaianness or Tanzanian-ness. What the outside world recognises about us is our Africanness. Hitler was a German, Mussolini was an Italian, Franco was a Spaniard, Salazar was Portuguese, Stalin was a Russian or a Georgian. Nobody expected Churchill to be ashamed of Hitler.

Not so in Africa. Idi Amin was in Uganda but of Africa. Jean Bokassa was in Central Africa but of Africa. Some of the dictators are still alive in their respective countries, but they are all of Africa. They are all Africans, and all perceived by the outside world as Africans.

When I travel outside Africa, the description of me as a former president of Tanzania is a fleeting affair. It does not stick. Apart from the ignorant who sometimes asked me whether Tanzania was in Johannesburg, even to those who knew better, what stuck in the minds of my hosts was the fact of my African-ness.

And the way I was perceived is the way most of my fellow heads of state were perceived. And that is the way you [the people of Africa] are all being perceived. So accepting the fact that we are Africans, gives you a much more worthwhile challenge than the current desperate attempts to fossilise Africa into the wounds inflicted upon it by the vultures of imperialism. Do not be proud of your shame. Reject the return to the tribe, there is richness of culture out there which we must do everything we can to preserve and share.

But it is utter madness to think that if these artificial, unviable states which we are trying to create are broken up into tribal components and we turn those into nation-states we might save ourselves. That kind of political and social atavism spells catastrophe for Africa. It would be the end of any kind of genuine development for Africa. It would fossilise Africa into a worse state than the one in which we are.

THE FURURE
The future of Africa, the modernisation of Africa that has a place in the 21st century, is linked with its decolonisation and detribalisation. Tribal atavism would be giving up any hope for Africa. And of all the sins that Africa can commit, the sin of despair would be the most unforgivable.

Reject the nonsense of dividing the African peoples into Anglophones, Francophones, and Lusophones. This attempt to divide our peoples according to the language of their former colonial masters must be rejected with the firmness and utter contempt that it richly deserves.

The natural owners of those wonderful languages are busy building a united Europe. But Europe is strong even without unity. Europe has less need of unity, and the strength that comes from unity, than Africa.

A new generation of self-respecting Africans should spit in the face of anybody who suggests that our continent should remain divided and fossilised in the shame of colonialism, in order to satisfy the national pride of our former colonial masters. Africa must unite! That was the title of one of Kwame Nkrumah's books. That call is more urgent today than ever before.

Together, we, the peoples of Africa will be incomparably stronger internationally than we are now with our multiplicity of unviable states. The needs of our separate countries can be, and are being, ignored by the rich and powerful. The result is that Africa is marginalised when international decisions affecting our vital interests are made. Unity will not make us rich, but it can make it difficult for Africa and the African peoples to be disregarded and humiliated. And it will, therefore, increase the effectiveness of the decisions we make and try to implement for our development.

My generation led Africa to political freedom. The current generation of leaders and peoples of Africa must pick up the flickering torch of African freedom, refuel it with their enthusiasm and determination, and carry it forward.”

SOURCE
New African Magazine. “Nyerere: “Without unity, there is no future for Africa.” http://newafricanmagazine.com/nyerere-without-unity-there-is-no-future-for-africa/. May 3, 2013.