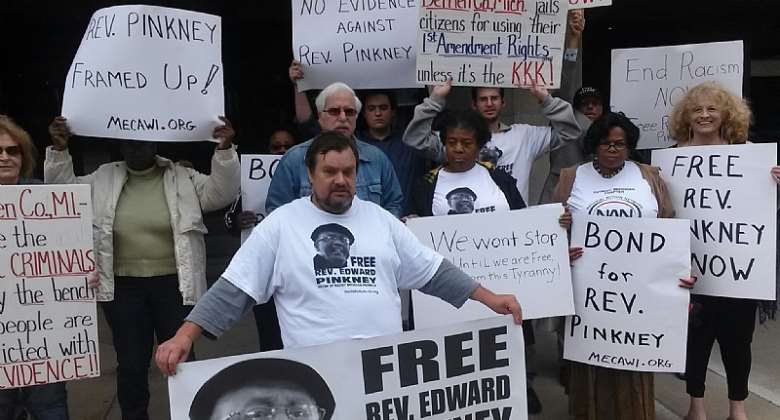 “It not one thing, it is everything,” says Rev. Edward Pinkney of Berrien County, Michigan who is currently incarcerated for unjust felony forgery charges at the Lakeland Correctional Facility in Coldwater.

Supporters of Pinkney held a demonstration in Grand Rapids outside the state appeals court calling for the civil rights leader to be released on bond pending the outcome of his challenge to a conviction for attempting to recall the Benton Harbor mayor. Pinkney, the leader of the Black Autonomy Network Community Organization (BANCO) based in Berrien County, was sentenced to 30 to 120 months in prison after a trial that was observed and followed by thousands throughout the United States and the world.

Pinkney’s defense Attorney Tim Holloway has filed a motion for the appellate court to reconsider their ruling to deny bond in a 2-1 decision. Pinkney poses no threat to the people of Michigan and deserves to be allowed to rejoin his family and friends in Berrien County.

Judge Sterling Schrock sentenced Pinkney after admonishing him for his role in Berrien County politics. The BANCO leader was charged and convicted of changing five dates on recall petitions.

Nonetheless, there were no eyewitnesses to this alleged crime and the charges were politically motivated where the Berrien County prosecuting Atty. Michael Sepic questioned witnesses on their organizational affiliations and what was said at BANCO meetings. As a result of the conviction and sentencing of Pinkney, a nationwide movement has sprung into existence demanding his release.

The demonstration outside the appellate court in Grand Rapids was covered by Channel 8 and WOOD radio which reaches hundreds of thousands across western Michigan. Protesters traveled to Grand Rapids from Detroit, Ann Arbor, Berrien County and other areas around the state.

A People’s Assembly and Speak Out were held on Sat. August 29 in downtown Detroit at Grand Circus Park. The event was called by the Moratorium NOW! Coalition and endorsed by other community organizations.

The event lasted for over three hours with so many people requesting to speak that some were not able to state their views. Organizers had to apologize due to the constraints of time.

Speakers at the assembly included Rebeykah Larson, who co-chaired the gathering. Larson is a housing activist in Detroit and has demonstrated against the pending property tax foreclosures in Wayne County.

Jo Ann Watson, former City Council member, attended to lend her moral support to the ongoing struggle in Detroit. Attorney Vanessa Fluker, a people’s lawyer working on housing rights, urged people to fight the banks which were at the root of the foreclosure crisis.

Errol Jennings, leader of the Russell Woods Neighborhood Association called on people to organize citywide to end the forced removals underway against African Americans and other working class people in the city. Jennings spearheaded a campaign to get resolutions from community organizations to enact a moratorium on tax foreclosures earlier this year.

The neighborhood resolutions helped to prompt the City Council to pass its own language requesting the moratorium. The tax foreclosure deadline was postponed for two-and-a-half months allowing thousands to make arrangements with the Wayne County Treasurer’s Office to save their homes.

Other speakers at the assembly included Cicely McClellan of the Detroit Active and Retirees Association (DAREA); Tijuana Morris of DAREA; Attorney Matt Clark of the Detroit Eviction Defense (DED); Pat Driscoll of DED and a retired steel worker; Jack Watkins, a youth participant who spoke on the rising tide of racism in the majority African American city of Detroit; Debra Simmons of the Detroit chapter of the National Action Network (NAN) and the American Civil Liberties Union (ACLU) National Police Reform Campaign; Jerry Goldberg of Moratorium NOW! Coalition; Michael Shane of Moratorium NOW! Coalition; Diane Bukowski, editor of Voice of Detroit and the campaign to demand a vote on the regionalization of the Detroit Water and Sewerage Department (DWSD); Valerie Jean, a water and environmental rights community activist from the North End neighborhood; Martha Grevatt of the UAW and labor analyst; Cynthia Johnson, AM 1440 radio host and leader of the Community Light Walk; Maureen Taylor, co-chair of the Michigan Welfare Rights Organization (MWRO); Meeko Williams of the Detroit Water Brigade; Stephen Boyle, a videographer and environmental activist; Helen Moore of Keep the Vote, No Takeover; Erik Shelly of Michigan United and Black Lives Matter; among others.

Yet this was not enough. The Wayne County Treasurer has announced that the remaining foreclosed properties, even those that are owner-occupied, will begin to be auctioned on September 11. The People’s Assembly agreed on an action proposal to hold a demonstration outside the Treasurer’s office at 400 Monroe on September 15 at Noon.

The action proposal circulated at the assembly stressed that “Thousands of Detroiters and other Wayne County residents will be evicted from their homes in the next month, as the Wayne County Treasurer auctions their homes to investors following tax foreclosures. The first auction begins September 11 and goes until September 17.”

This same statement goes on to note “This disaster is entirely avoidable! The State of Michigan is sitting on $200 million in federal Helping Hardest Hit Funds that can be used to pay delinquent property tax bills for occupied homes. But instead of using these funds for their stated purpose, to keep families in their homes, the state and federal governments are using these funds to tear down homes and turning them over to the ‘blight taskforce’ led by billionaire Dan Gilbert.”

Other action proposals adopted included an outreach initiative for the annual Labor Day parade on September 7. Two items will be circulated to tens of thousands of union members who come out every year to participate: a statement to the labor movement from Michigan political prisoner Rev. Edward Pinkney and leaflets calling for the demonstration at the Wayne County Treasurer on September 15.

A strong emphasis was placed on the need for jobs in the city of Detroit; the restoration of full pension and healthcare benefits promised to municipal retirees; support of a Title VI racial discrimination complaint to the federal government charging extreme bias in the destruction of the Detroit Public Schools system languishing under emergency management for most of the last 15 years; the need to seek justice for those victims and their families of police violence; and the defense of residents who are facing eviction by the banks and Fannie Mae backed up by the courts.

This People’s Assembly once again tested the hard won right of community organizations to hold political meetings and demonstrations on the streets in downtown Detroit. Efforts to ban such activities were attempted by the bankers and corporate heads during 2014 prompting a legal and political struggle to guarantee free speech and assembly in the financial district and its environs.

Earlier this year the City of Detroit Law Department was forced to issue guidelines regulating the right of assembly and speech in downtown. The case remains open while the question of damages to the Moratorium NOW! Coalition and Women in Black are settled.