Kantanka Cars Made In Ghana -A Brain Child Of Apostle Sarfo 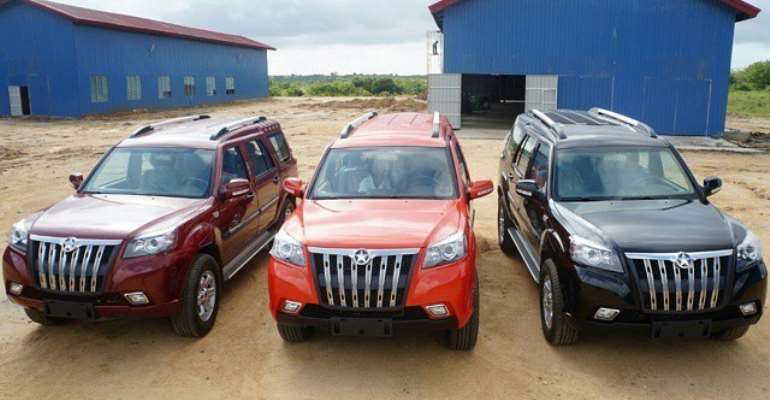 After more than 50 years of independence Ghana has finally produced a genius who rather came as a religious messenger showing real sense of Christ's love for humanity in the form of charity and selfless leadership in mobilizing natural and local resources in advancement of ordinary people and a nation as a whole.

Apostle Dr Sarfo started his Christo Asafo Mission embarking on series of farming projects primarily to help the poor and the needy in society, exploring engineering and technology and later education to supplement his quest to alleviate the suffering and improve the overall lifestyle of his flock. In the end he came up with Kantanka Cars and other classy gadgets and equipment including Tv's, Hifi's, Refrigerators, various machines and a host of sophisticated equipment most Ghanaians find it difficult to believe an African can come up with.

This is not the first time a local made car has come to the Ghanaian automobile scene. We had the Boafo Cars in the early 70's but they did not last due to lack of support from Ghanaians.

The French engineer Nicolas Joseph Cugnot built the first self-propelled vehicle (Paris, 1789), a heavy, three-wheeled, steam-driven carriage with a boiler that projected in front; its speed was c.3 mph (5 kph). In 1801 the British engineer Richard Trevithick also built a three-wheeled, steam-driven car; the engine drove the rear wheels. Development of the automobile was retarded for decades by over-regulation: speed was limited to 4 mph (6.4 kph) and until 1896 a person was required to walk in front of a self-propelled vehicle, carrying a red flag by day and a red lantern by night. The Stanley brothers of Massachusetts, the most well-known American manufacturers of steam-driven autos, produced their Stanley Steamers from 1897 until after World War I. The development of the automobile was accelerated by the introduction of the internal-combustion engine. Probably the first vehicle of this type was the three-wheeled car built in 1885 by the engineer Karl Benz in Germany. Another German engineer, Gottlieb Daimler, built an improved internal-combustion engine c.1885.(http://www.infoplease.com/encyclopedia/science/automobile-development-automobile.html#ixzz3MjFUkKbK)

These inventors got the needed support from their respective nationals and governments hence the rapid improvement the abundant use of automobiles throughout the world today. In some African countries where similar feats have been achieved their respective governments have supported massively.

Now we have Kantanka Cars coming into the scene in Ghana. Let us see how Ghanaians and government will embrace and support them. Politicization of Kantanka Cars will be a national embarrassment and disgrace.

It is encouraging to hear Ghana's Trade Minister Dr Ekow Spio Gabrah promising that his Ministry will be the first to patronise Kantanka Cars when they go commercial. I hope it will not turn out to be one of the usual rhetoric from government officials at public functions.

I think government can show more support by ordering them for new MP's, Ministers, Ministries and other state organizations and put a stop on the over-reliance on imported cars. Finally, the President should demonstrate his call to promote 'Made in Ghana goods' by purchasing one for himself a simple indication of a proud African encouraging a fellow African.