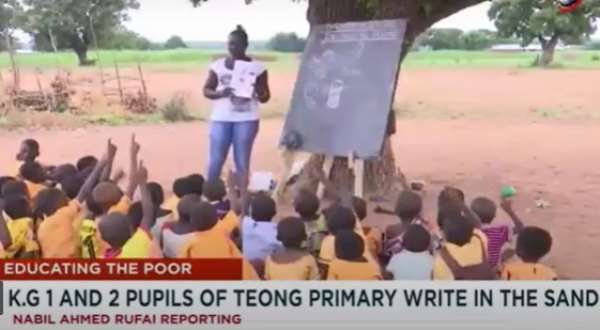 On 27th July 2018, GH One News brought to the nation’s attention the most shocking and deplorable conditions of TEONG PRIMARY SCHOOL in the Upper East Region where the children were not only sitting on the floor but also writing in the sand.

I only saw this video posted on a platform and I was reduced to tears. I had heard a lot of such stories on social media but never believed it until I saw that news on YouTube.

I commend GH One News for bringing this to the fore. I wonder if they did the needful by following it up nearly three years after that coverage. That would have been referred to as responsible journalism. But who knows maybe that may have encouraged the government to speed up their flagship free education programme. Therefore, we must still give credit to GH ONE NEWS.

The truth is if 64 years after Independence and we still find some parts of the country with such deplorable education conditions, then I think we have failed as a country. It is always easy to put the blame on the government. That is the norm in the country where people entrusted with some duties shirk their responsibilities and blame the government for lack of support. I listened to the DCE during the interview by the reporter who respectfully admitted the deplorable condition being reported to him but failed to do anything about it.

If you ask me I would say he got away with murder with the soft question from the interviewer. I cannot fault him alone. What about the GES in the district that recognised the school and failed to even provide SLATES and CHALK talk less of Books?

People have been put in positions and have no clue what their responsibilities are. What about the Village chief and his elders? What about the community groups in the area? Yes, we wait and expect the government to provide all. It is very sad to expose such children to such conditions.

Now that breaking a lot of UN Conventions.

The Convention on The Rights of the Child: 1753 which was Adopted and opened for signature, ratification and accession by General Assembly resolution 44/25 of 20 November 1989 which came into force 2 September 1990, in accordance with article 49.

Ghana appended its signature in 1990 and ratified it the same year. This Convention may now appear to have been violated. (https://www.ohchr.org/EN/ProfessionalInterest/Pages/CRC.aspx)

Specifically, there are gross violations on Article 28.1(a) Make primary education compulsory and available free to all;

(b) Encourage the development of different forms of secondary education, including general and vocational education, make them available and accessible to every child, and take appropriate measures such as the introduction of free education and offering financial assistance in case of need;

(c) Make higher education accessible to all on the basis of capacity by every appropriate means;

(d) Make educational and vocational information and guidance available and accessible to all children;

(e) Take measures to encourage regular attendance at schools and the reduction of drop-out rates.

Article 28.2- States Parties shall take all appropriate measures to ensure that school discipline is administered in a manner consistent with the child's human dignity and in conformity with the present Convention.

1. States Parties agree that the education of the child shall be directed to:

(a) The development of the child's personality, talents, and mental and physical abilities to their fullest potential;

(b) The development of respect for human rights and fundamental freedoms, and for the principles enshrined in the Charter of the United Nations. (www.ohchr.org/EN/ProfessionalInterest/Pages/CRC.aspx)

I implore all Child Rights Organizations and other stakeholders to start some action plan to identify all these schools in the country and take government and other institutions to task drag them to court where appropriate.

Children are not asking much from us other than the basic necessities and their right to life.

I want to believe that there has been improvement since that report last came out.

Long Live Ghana. Let us all begin to make it great and strong. I think it is bent but not completely broken as the saying goes.

Collaborate with NIA to end compilation of new voters’ regis...
51 minutes ago