John Mahama: A Statesman Par Excellence In The Making 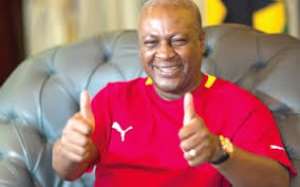 President John Mahama ascended to the throne of Ghana's Presidency in July 2012 under circumstances which one could not regard as normal. The unanticipated death of President Atta Mills suddenly placed him in the saddle to govern the country at a time when he obviously least expected such a huge responsibility. He was immediately confronted with the responsibility to oversee the burial of a President, return the country to normalcy and carry out the numerous responsibilities attached to the Presidency under irregular circumstances.

He rose up to the task and handled the transition successfully, and took the country through one of its most emotionally tasking transitions in its history. That was the first transition he had to manage, and he handled the assignment with precision such that most Ghanaians breezed through that unusual transition period as though it was usual.

After successfully managing the first transition, President Mahama was immediately confronted with the challenge of election 2012 to maintain his presidency. He had to confront this challenge with a period of about four months of electioneering campaign in a hotly contested election in which his main opponent had the advantage of a couple of years of campaigning under his belt, as compared to the few months of campaign period that he had at his disposal. President Mahama managed the challenge successfully and won the election by a margin of approximately 300,000 votes in the course of the most high tech of elections (biometric equipment, procedures and all)that Ghana had ever witnessed.

President Mahama's main opponent Nana Akufo Addo however refused to accept the results alleging electoral irregularities and violations, thus throwing a controversy into what should have been a normal second transition for John Mahama. Nana Akufo Addo, Dr. Bawumia and Jake Obetsebi Lamptey subsequently mounted a legal challenge at the Supreme Court to the victory of John Mahama, and ushered him and Ghana into unchartered waters of a legal challenge to his legitimacy as President.

For President Mahama what he was confronted with was the responsibility to govern the country normally against the backdrop of a destabilizing legal challenge to his presidency. His second transition as President was thus made controversial by an opponent who could not accept defeat, and proceeded to contest his presidency with an unnecessary legal challenge which not only destabilized his Presidency but the country in general.

John Mahama again put up a brave face of normalcy and managed the governance of Ghana during the eight months of this unprecedented legal challenge to the Presidency of the Republic. In a statesmanlike manner he carried on his duties as President,albeit within the context of a lame duck President. During this period, his lame duck status emboldened his opponents who refused to recognize him as President and demonstrated it by boycotting his inauguration, and walkouts in Parliament among other actions calculated to destabilize his government. Interestingly in the midst of this difficult second transition, Ghanaians expected him to exercise his responsibilities as President normally and expected him to deliver the goods on his mandate.He also had to contend with unusual occurrences, e.g. numerous market fires, intenselabour agitations, numerous power outages, and a major currency crisis all of which cannot be delinked from the negative political environment created by the unjustified challenge to his Presidency.

Even when the Supreme Court eventually delivered a verdict in his favour and confirmed the results of the elections, his opponents casts aspersions and negative insinuations on the verdict of the highest court of the land, primarily to lay the foundation for another contest in 2016 between him and Akufo Addo who on all counts had lost the 2012 elections. However a flawed premises for another Akufo Addo contest emerged being that he never lost the elections and should be given another opportunity to reclaim his nonexistent victory.

For John Mahama therefore his transitions into the Presidency of Ghana following the demise of Atta Mills and following election 2012 have been challenging to say the least. Through all of it he has exhibited a high degree of mental fortitude and managed to operate successfully against the backdrop of all that his opponents have thrown at him. He has chosen a transformational agenda for Ghana which naturally comes with hard choices in decision making and sacrifices for the Citizenry, and has quietly endeared himself to many both inside and outside Ghana for his governance approach and style.

His Presidency cannot be said to be all rosy and without challenges, but on the whole and considering the difficult stage that he has been given to perform his act as President, John Mahama has distinguished himself admirably so far, and is on track to become one of the best statesmen that Ghana and Africa has ever produced. His opponents underestimate his capabilities, but the challenges of his transition episodes have moulded him into a focused leader who has demonstrated an uncanny ability to rise above and conquer adversities as they emerge. He has established himself as an effective leader who thrives even in moments of crisis and is on track to lead Ghana along its challenging path to positive transformation.