Red Flags In The Creation Of New Regions In Ghana 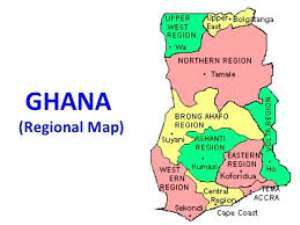 President Akuffo Addo is reported to have directed the Electoral Commission to organize referendums this year on the issue of the creation of new regions out of existing ones in Ghana. Specifically and controversially he stated on a recent visit to Nalerigu Northern Ghana as follows:

“Last Thursday before I left Accra to begin the Northern tour, I wrote a letter to the Electoral Commission (EC) asking them to organize Referendums this year according to the recommendation of the Brobbey Commission in the affected areas to determine whether the people really support the creation of the proposed regions”.

The President was further reported to have stated that before the regions would be created, 50 percent of eligible voters in the affected areas must turn out to vote, which 80 percent of the 50 percent turnout must vote yes ( courtesy Modern Ghana /GNA report of July 22, 2018)

It must however be emphasized that the process of creating new regions is a constitutional one that should be embarked on in strict compliance with the spirit and letter of the 1992 Constitution, specifically articles 4 and 5 of the constitution.

Indeed the locus of the referendums is significant in this whole exercise considering the fact that the requirement for 50% of the persons entitled to vote and 80% verdict of voters who cast their vote is a strict requirement that has to be complied with. It is therefore proper and prudent for there to be true and broad consensus in whole regions which may be affected by the exercise of creation of new regions as opposed to isolating portions of the affected regions where sentiments in favour are strong, in order to avoid creating disputes and conflicts out of the exercise of creation of regions. A good example of a recent referendum that was properly recently held is the UK referendum on Scottish independence which was held in all of the UK and not only in Scotland where sentiments in favour of creation of an independent Scotland was overwhelming.

The President may be in a hurry to divide certain regions in Ghana on the basis of a perceived “substantial” demand” but the 1992 constitution of Ghana has strict requirements for creation of regions which has to be complied with to legitimize the whole process. In this regard it may be necessary at this significant stage for this issue to be clarified in the Supreme Court prior to holding any referendum on the creation of any new regions in Ghana.

It is clear that the constitution envisages that the referendum be held in each such regions and not affected areas which obviously do not yet qualify as regions.

For the sake of broad consensus on such a delicate issue as the creation of new regions the priority should not be on rushing through with the process as implied in the President directive without ensuring that the necessary constitutional requirements strictly and fully complied with. This is because there are potential conflicts and disputes that could emerge if the necessary broad consensus for such a significant exercise as envisaged by the constitution by the constitution is sidestepped.