'Until A Man Proposes, You’ll Rot In Your Beauty, Intelligence'—Duncan-Williams Tells Women 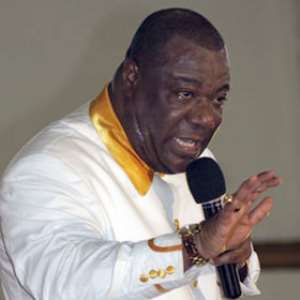 Archbishop Nicholas Duncan-Williams has said women must see men's love proposal and decision to marry them as a “privilege” because without that, they will “rot” away with their beauty and intelligence.

The charismatic spiritual icon has therefore admonished women to be grateful to men if they choose to marry them, rather than misbehave.

“Sister when you get married, be thankful and stop misbehaving because it's seven to one. It doesn't matter how pretty and beautiful and intelligent you are; until a man proposes to you, you are going to stay beautiful, pretty, intelligent, nice and whatever, and rotten”.

“That's what it is, and somebody needs to tell you because there [are] so many women out there misbehaving. You got to be told the truth. And the reason why a lot of marriages are not working is because everybody is afraid to offend women to tell them: 'Come on girl, you got a good thing going, hold fast onto it, don't misbehave and don't lose it'”.

He said unlike men who can marry at virtually any age, women's biological make up and physiology put them at a disadvantage as they grow older and, therefore, said women must appreciate it when men choose to marry them because the age pendulum tilts against them.

“And somebody says: 'How about the men?' They got issues too but you see, the fact of the matter is that a man can be 100 years old and marry again if he 'moves'. A man can be 100 years and marry if he can 'drive'. But a woman just can't get married at a particular age. [It] gets to a place [where] everything begins to melt and you can't marry just because you want to marry”, the founder of the Christian Action Faith Ministries explained.

“It is what it is, and sometimes we don't want to hear the truth. We get offended when the truth is said, but I have come to a place [where] I tell people that I have lost my reputation a long time ago, and so it doesn't really matter whether you like me or you don't like me, and I don't preach to impress people anymore. I stopped doing that a long time ago. I deliver what I'm told to deliver, and whether you receive it or not is none of my business; it's your business”, he said.

PURC orders ECG to pay compensation to affected customers by...
21 minutes ago