When Mr. Goodluck Runs Out Of Luck 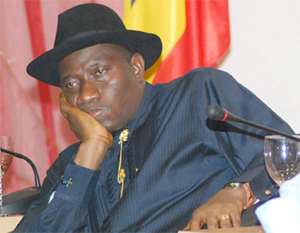 Poor President Goodluck Jonathan! Deserted by his own Christian name, he not only faces disturbances and attacks from Boko Haram militants in the north, but the river delta region in the south has once again flared up with piracy, organized crime, separatism, and political violence.

The man seems to be holding many poisoned chalices in both of his hands. Luck is no more smiling on the man anymore.  Unless he works so hard to bring back the abducted school girls from Chibok, his name would be changed to Mr. Badluck Jonathan.

I always support people who blame the Goodluck Jonathan-led government for the Boko Haram saga that has been going on for some years now.  The killing of the leader of the group Mohamed Yusuf in 2009 should have been followed with an all-out war against this terror group.

Instead of the government pursuing these social misfits and finishing them off totally, Goodluck Jonathan used kid-gloves on these criminals and now Nigeria is at the crossroads.

If Mr. Goodluck knew he needed outside help to subdue these miscreants, he should have done so before the poor girls were abducted. This is an enemy that runs and hides, but won't be able to hide forever.  They think their havens are safe but surely these havens won't be safe forever.

The fight against Boko Haram should be a monumental struggle between good and evil.  But at the end of the day good will prevail.  Boko Haram, like all jihadists, hates Christians. They hate Judaism and they hate everything that is not them.

The fight against terrorism is a global fight and as such all hands should be on deck.  In this 21 st  century, the world cannot sit down for a few sick brains and lunatics to disturb the peace with their so-called jihadist ideology.

Under a lunatic like Adolf Hitler, Germany was responsible for World War II which claimed tens of millions of lives.  Similarly, under a sick brain like Osama Bin Laden the people of Afghanistan continue to carry the scars of war.

The new leader of Boko Haram, Abubakar Shekau has brought the name of Nigeria into shame before the civilized world. The world must not entertain terrorism that holds human life in disdain.  Today, Nigeria is on bended knee in prayer for the abducted girls from Chibok but tomorrow Shekau and his fellow evil-minded followers will pay a very dear price.

Goodluck Jonathan must do everything to win this war against terrorism if he wants his name to be written in gold when he leaves the presidency.  No equivocation. If the army kills one thousand members of Boko Haram, it must be told to the world to serve as deterrent to the remaining members who may contemplate revenge.

The Nigerian army must rain holy hell on the Boko Haram, damn whatever the human rights activists will say. We must rock their world to the foundation. This is not the time for niceties and sweet talks.

I had cause to write a piece in this column, captioned: 'The Boko Haram Next Door' in which I drew the attention of the government of the possibility of Boko Haram being imported into our society here in Ghana and I still stand by that. If we adopt the 'Dzi wo fie asem' diplomacy as proposed by the late President Mills, we will be laughing at the wrong side of our mouths.

Don't forget we have many Ghanaians living in Nigeria and the possibility of Ghanaian students among the abducted girls from Chibok cannot be ruled out.  Terrorism itself is a pathological copy of the organism it attacks; a retrovirus created from the latter's cells.

It is thus, deceptive to think that the enemy comes from without, for there is no location outside of our contemporary network of global relationship from which any impulse, human or inhuman, could come.  The threat of terrorism is omnipresent - like the telephone, the camera, the internet and the spy satellite.

It is very difficult to be certain of anything in the dark world of terrorism.  Yet practically, all terrorist activities have one characteristic in common that is hard to overlook:  the protagonists' self-destructive tendencies. Although the overwhelming majority of people have no desire to run amok, they have no chance of survival when faced with somebody infatuated with suicide.

The invisible enemy of our world today and civilization for that matter is terrorism and that enemy must be unmasked and inexorably pursued and destroyed.  Muslims all over the world should understand that the world is not at war with Islam which means peace. Billions of adherents of this religion practice it all over the world without any hindrance or intimidation.

Its teachings are similar to that of the Christians and in some cases names of prophets in the Holy Bible are also recognized in the Holy Quran. Terrorists have rather declared war on peace-loving people of the world and they must be called to account for this.  Whether we bring these enemies to justice or bring justice to these enemies, justice must be done.

These Boko Haram terrorists are traitors to their own faith and they are trying to hijack Islam. They are desperately trying to prevent the peaceful teaching of Islam.  The goal of Boko Haram is not to make money but its goal is to remake the world and impose its radical belief on people. They practice a fringe form of Islam which is rejected by vast majority of Muslims.

If you listen carefully to Abubakar Shekau, the leader of Boko Haram, you will realize that the guy is either high on drugs or simply mad.  They say Boko Haram means Western education is an abomination but Shekau speaks fluent English Language and some say he is a graduate from one of the universities in Nigeria.

So you see the absurdity here? Killing him like the US did to Osama Bin Laden will not solve the problem. The man must be seized alive, his private parts smeared with grinded hot pepper before he is   debriefed.  Through that we will know where they get their arms, who sponsors them and whether they have links with Al-Qaeda.

That is how we the angels do it in heaven when Satan crosses our path.

The fight against Boko Haram should be considered as a war between freedom and fear.  Freedom and fear, like justice and cruelty have always been at war but in all cases, freedom and justice have won the day.  To defeat the Boko Haram hoodlums, Mr. Jonathan should not falter, fear or waver.

These guys should be driven from place to place until they will have nowhere to hide.  In fact, Mr. Jonathan should direct all resources and weapons of war at the disposal of the Nigeria government against the Boko Haram and make sure they are found, stopped and totally defeated.

The Nigerian army with the support of foreign intelligence covert personnel should be able to ceil their supply roots and leave them in the forest to starve to death.  I know some legalistic purists will call this genocide. If it is, so be it!

The Boko Haram scatterbrains are enemies of freedom and they do not distinguish between civilians and the military. To them, religion can be practiced only as their leader dictates.  If they are allowed to dig deep in Nigeria, the evil rule of the Talibans in Afghanistan will be a child's play as compared to what they will introduce later.

During the Taliban rule, women in Afghanistan were not allowed to go to school or work.

You can be jailed if you own a television set and caned if your beard is not long enough. Children were not allowed to fly kites and spectators at football matches were forbidden to shout 'goal!!'  Instead, they shout 'Allahu Akbar' when a goal is scored.  If you were heard shouting 'goal' you received 50 lashes instantly.

In fact, women were not allowed to go shopping alone unless they were followed by their husbands or brothers.  A thief's left hand is cut and when found stealing again, the right one is also severed.

If a woman fornicates her own husband was given AK 47 assault rifle to mow her down after Friday prayers just near the mosque and her body thrown to the dogs to consume.

That is why the Nigerian government must do everything possible to subdue these wicked Boko Haram criminals because responding to such enemies only after they strike first is not self-defence.  It is suicide.  Nigeria has seen war before, like the Biafra War, and Nigerians know the pain and anguish of losing dear ones at the battle front.

But this war is a different one.  This is a war between good and evil.  And so in solidarity with the abducted girls from Chibok, I refuse to smoke my Havana Cigar today. (Did I hear you say OH!  It is a sign of patriotism!)

Carlos Ahenkorah Resigns After 'Roaming' Around With COVID-1...
10 minutes ago