Frequent Fire Outbreaks In Ghana: Let’s Use Preventive Methods To Deal With It 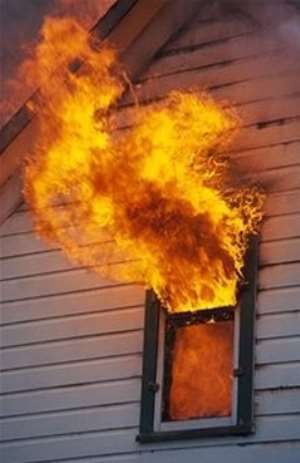 One problem that seems to be getting out of hand is the frequent fire outbreaks throughout Ghana. Investigations conducted so far by all institutions concerned including the team from the United States of America have shown that the calamities are caused largely by accidental and careless handling of gas cookers, electricity and naked fires in our markets, homes, offices and industrial settings.

As we are on a verge of recording higher economic growth there is the need for us to take steps to stem the tide of fire outbreaks through preventive means to avoid possible setbacks resulting from loss of lives and properties.

Apart from frequent fires at Kantamanto, Agbogbloshie and Makola markets that caused considerable damage to market wares many communities and industries across Ghana continue to have had their share of havocs from fires

Gas explosion
Just as other communities, Residents of Kwahu Fodua Zongo Community in the Eastern Region and its environs recently witnessed a fire disaster which was caused by a gas explosion that razed down 26 houses, food stuff, animals, sugar cane farms, cooking utensils among others.

About 27 people got injured out of burns in the process.

Eight people including men and women who got burnt have been confirmed dead, while 4 children including a six-month old baby were also burnt to death.

The incident occurred after a gas tanker crashed into a building by the roadside.

The Twenty-seven others with various degrees of injury were on Wednesday referred to Holy Family Hospital at Nkawkaw and Komofo Ankoye Teaching Hospital in Kumasi for treatment.

The tanker, with registration number GE 6376-13 and with the inscription 'Kan Royal', which was heading towards Kumasi, exploded, 20% volumes of the gas which leaked and spread in the direction of the wind about 300 meters causing an explosion in one of the houses which spread to 26 other houses.

A church called New Faith International along the highway where the gas tanker over turned burnt all their chairs leaving behind only a Bible and the pastor's picture.

26 houses were burnt affecting their windows, doors, , roofing sheets, clothes, while 350 bags of cola nuts were destroyed including sheep, goats and fowls as well as crops such as cocoa plantain and a large stretch of approximately eight hectares of land.

A little Yahuza Zakari, a 6 years old boy in KG 2 at Islamic Primary School in the area, lost his two little siblings, one elder boy and little girl, while his parents who got burnt were admitted at Komofo Anokye Teaching Hospital at Kumasi for treatment.

On Thursday, two MPs of the area together with MMDCEs in the area respectively donates 10 bottles of cooking oil, 10 bags of rice, 91 pieces of rubber plates, 30 rubber buckets, 60 cups, 22 mats and 8 bales of clothes to the victims. Other Philanthropists also gave them cooked food, money and Sackets of water.

Mallam Lawal Mohammed, the linguist of Fodua Zongo, who took Daily Guide round the scene said, the incident has rendered them homeless since Wednesday and has destroyed all their properties.

News in the Daily Graphic of Monday, June 17, has indicated that Fires from electricity and gas continue to cause considerable damage to lives and properties. It added that the country recorded 2,201 fire outbreaks in the first quarter of this year with markets being the most affected.

Days after the fires, the affected markets became mourning grounds, as traders and shop owners mourned their losses.

The Ghana National Fire Service (GNFS) put the estimated cost of damage to property in the first quarter at GH¢16 million.

From the total fire outbreaks recorded in the first quarter, it means that on the average, 18 fires occurred daily while 550 were reported monthly.

It appears that if the trend of fire outbreaks continues this year, the number will exceed the number recorded last year.

Major fire outbreaks and the plight of the victims:

Some of the major fire outbreaks recorded this year occurred at the Kantamanto Market in Accra, where virtually the whole place was razed down by the inferno.

Other markets were the Makola Number Two and Agbogbloshie markets and the Makola Shopping Mall all in Accra, Kumasi Magazine and the Kumasi Central Market.

The fire outbreaks at the markets left traders in agony because aside their losses, their livelihood and that of their dependants were destroyed.

For some time , they were asked to stay away from the sites from where they hitherto earned a living until further directed.

Apart from the Kantamanto Market where traders have resumed work, the Makola Shopping Mall which was gutted by fire on May 24, 2013, remained barred to entry by the traders and was under security guard.

The situation was not different at the Makola Number Two Market as traders were asked to stay off for investigations to be complete.

Fire outbreak is never a pleasant incident. When fire breaks out, there are serious problems for the residents of the particular property as eliminating fire isn't an easy task to do. There are many causes of fire outbreaks but there are also many ways to prevent such events. Also, even when a fire has destroyed a property so much, the property can be restored by hiring fire and flood restoration experts.

However, the wisest thing to do is to stop the fire before it gets to the important assets of your property. The information provided below will help you do just that;

There are countless things that can set a house or building on fire. Sometimes a fire occurs because of a person's carelessness but other times it's just fate for which nobody can be blamed. Below are some of the most common causes of fire outbreaks which you should read in order to avoid them and save your property from a fire situation.

Gas Leakage
Gas leakage can cost you your precious home if it is not rectified in time. Gas leakage can be experienced in any property no matter whether it's an old or a new one. When gas is leaking through the pipes in your kitchen area or any other part where gas is being used for cooking or related purposes, a single matchstick can blow the entire place up.

Generally, natural gas is safe to use in home but when it does not burn up completely due to faulty installation or lack of ventilation, it passes off a byproduct of carbon monoxide. The more carbon monoxide in the air, the less oxygen you would be able to inhale, potentially harming you. This is when you only exhale the gas but in-case it catches fire, the damage it would do will be irreversible. Because most domestic fires result from gas and electricity all inhabitants of households must pay attention the correct use of electricity and gas. All damaged and possible leaking cylinders must be discarded.

Smoking Cigarettes
It is normally believed that smoking is hazardous to a person's health but there are a lot of other harms that cigarette smoking is doing to the surroundings of the smokers. Smoking damages the environment, it spreads different diseases among those people who are near the smokers and are becoming a target of 'second hand smoke'. Apart from all these harms, when a cigarette makes contact with something flammable, it holds the power to set an entire building or house on fire. So if you are a smoker, its time you realize your habit can damage your home as well as your health.

Over Heating Of Electronic Equipment
Electronic equipment that is poorly stored with constricted air vents such as radios, stereo equipment, television and computers are expected to overheat. This would lead to fire outbreaks and related issues. So it is important that you always make sure to have all this equipment fitted and configured properly along with adding surge protectors in order to avoid electrical arcs or spikes equipment which can lead to sparking and short circuits. Thus, whether it is the cigarette smoking, gas leakage or electric equipment over-heating, there are many things that can ignite fire in your property and which is why you should make sure to have the proper measures in order to handle such fire and flood

To be able to reduce or curtail fire outbreaks in the country we need to do the following:

• NADMO and the Ghana fire service have been doing their bit in dealing with disasters in Ghana. However because their mandates are on disaster management there is the need for a strong preventive measure to deal with fires in Ghana

We recommend that a Public Safety Desk be establish at NADMO or any government organization to work on fire prevention by educating people in the neighborhoods and industrial set ups on how to prevent fires. Public safety guard must also be formed to make sure all neighborhoods, industrial set ups and government offices conform to laid down principles in electricity and gas and naked fire use. This way we would be making headway in finding solution to the frequent fire out breaks in Ghana