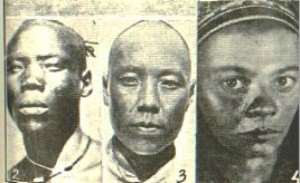 China is apparently finding out now what Black historians have been reporting for many years, the first inhabitants of China were in fact black.

H. Imbert, a French anthropologist said in his book, “Les Negritos de la Chine”,”The Negroid races peopled at some time all the South of India, Indo-China and China. The South of Indo-China actually has now pure Negritos as the Semangs and mixed as the Malays and the Sakais.”

Another author and professor, Chang Hsing-Lang, revealed similar information in writing “The Importation of Negro Slaves to China under the Tang Dynasty”, “Even the sacred Manchu dynasty shows this Negro strain. The lower part of the face of the Emperor Pu-yi of Manchukuo, direct descendant of the Manchu rulers of China, is most distinctly Negroid.”

These professors through their research and studies have reason to believe that a Negro Empire actually existed at the dawn of the country's history citing evidence of substantial populations of Blacks in early China, including finding reports of a major kingdom ruled by Blacks being frequently mentioned in historical Chinese history documents. And, Chinese chroniclers report that a Negro Empire existed in the South of China at the dawn of that country's history

The notion that blacks were the original inhabitants of China has been thwarted by white scientists and even some blacks as the result of a sweeping message of white superiority and inferiority of black Africans and their descendants spreading worldwide.

In 2005, DNA testing proved that the first inhabitants of China were black Africans. The study was conducted by a Chinese DNA specialist named Jin Li and a team of Chinese and other scientists. Li admits that he wasn't trying to prove this fact, instead he initially wanted to prove that the Chinese evolved from hοmo erectus independently of all humans. After collecting more than 12000 DNA samples from 165 different ethnic groups, Li and his team found that early humans belonged to different species but modern humans had descended from the East African species.

One scientist on the team, Li Hui, said that 100,000 years ago humans began migrating through South and Southeast Asia into China from Africa. Their testing showed that 65 branches of Chinese all carry similar DNA mutations as the people of Southeast Asia.

Another scientist on the team, Jin Li had this to say about their findings, “we did not see even one single individual that could be considered as a descendant of the hοmo erectus in China, rather, everybody was a descendant of our ancestors from Africa.”

When asked how he felt about these findings, he responded, “after I saw the evidence generated in my laboratory. I think we should all be happy with that. Because after all, modern humans from different parts of the world are not so different from each other and we are very close relatives.”

The team of scientists participating in the 5 year study of geographic and genealogical routes tracing the spread of settlements of ancient and modern humans were from China, Russia, India, Brazil and other nations.

Richard Leaky, a well-known, Kenyan-born Paleoanthropologist who has dedicated his life to studying fossils and the past believes that we must study the past if we are to have a future. He had this to say, “If you get to the stage where you can persuade people on the evidence, that it's solid, that we are all African, that color is superficial, that stages of development of culture are all interactive, then I think we have a chance of a world that will respond better to global challenges.”

Wow, so it appears that Africa truly is the cradle of all civilization after all.

Daphne R is an experienced marketing and communications professional that provides social commentary, self-help, tips, and reports news of events that matter to African Americans.