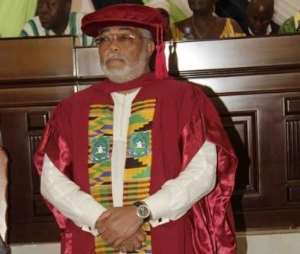 To start with, what is Double Standard, curious minds may probe? Double standard is a set of principles that allows greater freedom to one person or group than to another.

What type of hypocrisy and double standard the behaviour of Rawlings is? Is Mahama not the worst ever President to preside over the most corrupt, incompetent and mediocre government ever to exist in Ghana?

Rawlings upon all the gargantuan cancerous corruption in perpetuation by the NDC government would still want to see them win future elections in Ghana. He only shows outward concern for the suffering masses while deep down his heart, he supports the perpetration of endemic corruption by the NDC. If it was not so, how would he exempt Mahama from the ongoing corruption and also, expect the NDC to continue to win elections?

If I were Rawlings, I would rather campaign for the NDC to lose elections, castigate Mahama for his inability to let go his corrupt practices and also educate the public about how corrupt the NDC are.

Rawlings is not a person who seriously has the welfare of the suffering masses at heart, he only pretends. Could Mahama take up the gauntlet to prove that he has never involved himself in corruption ever since he became the Vice President until today as I write? Does he know anything about the collapse of the Merchant bank and the loans his brother took from the bank? What about the Embraer aircrafts purchased from Brazil?

I am ready to challenge him if he dares me. I put it to Mahama that he is inherently corrupt. I put it to Rawlings that he is a hypocrite whose intentions about the suffering masses are not clear but suspect. If he is unable to see how corrupt Mahama is, then let him forget about his accusations of people in Mahama's government for being "old evil dwarfs, babies with sharp teeth, greedy bastards, monsters and political sycophants"

Mahama is too corrupt to be of any use to Ghana. Is he ready to invoke some lesser gods to clear his name as did recently by Asantehene, Otumfuo Osei Tutu II? I will not spare these people who are taking Ghanaians for fools instead of serving us with all their heart, soul and mind.

HATE ME IF YOU LIKE BUT IT MUST BE FOR A GOOD REASON.