United States Has Hidden Hand in Kenya-Somalia Crisis of Relations 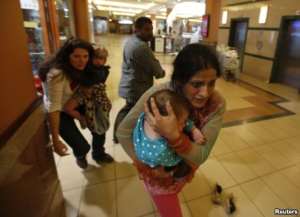 Billows of smoke emanated from the Westgate shopping mall in Nairobi, Kenya on the third day of a standoff between Kenyan, Israeli and United States forces (FBI) against the seizure of the facility by members of the Al-Shabaab Islamic resistance movement based in Somalia. Reports indicated that at least 62 people had been killed since the incident began on Saturday September 21.

Eyewitnesses reported that a group of armed men and women stormed the entrance of the mall during midday shooting at random and tossing hand grenades. Members of the armed group were quoted as saying that their operation was in response to the ongoing occupation by approximately 2,500 Kenyan Defense Forces (KDF) troops of southern Somalia.

Kenya, which shares a border with Somalia, entered the troubled Horn of Africa state in October 2011 in what was called Operation Linda Nchi (protect the nation in Kiswahili). The Kenyan government at this time was led by President Mwai Kibai and Prime Minister Raila Odinga, two close allies of the U.S. administration.

KDF forces bombed the strategic port city at Kismayo in the early phase of the operation. The city was a financial base for Al-Shabaab which controlled the lucrative charcoal exports from the country.

Since the intervention of Kenya into Somalia, unrest has continued in the south of the country where resistance is escalating outside Kismayo involving Al-Shabaab guerillas who attack KDF positions on a daily basis. Even local politicians and elders not associated with Al-Shabaab have complained about the activities of the Kenyan forces which are accused of interfering in the internal affairs of the region as well as human rights violations against civilians.

The Role of the U.S. in the Somalia Crisis
The attack on the Westgate Mall is being portrayed by the corporate and capitalist government-controlled media in the U.S. and Europe as a new episode in the so-called 'war on terrorism.' Yet the role of the White House through the Pentagon and the Central Intelligence Agency (CIA) goes without mention.

U.S. imperialism has been involved in attempts to influence the political situation in Somalia and the Horn of Africa for many decades. During the late 1970s, former Somalian military leader Mohamed Siad Barre was courted by the Carter administration and convinced that an invasion of Ethiopia, then in alliance with the Soviet Union and Cuba, would result in Washington's economic and military support to the beleaguered state which had attempted to adopt a socialist-orientation in 1969.

The invasion of the Ogaden region of Ethiopia in 1978, where a large population of Somalis lived, proved to be a monumental disaster for Mogadishu. Cuban internationalist forces then in Ethiopia to assist the government of Mengistu Haile Mariam fought alongside the national army of Addis Ababa defeating Barre's forces.

This ill-advised military adventure plunged Somalia into a deeper economic and political crisis that lasted for well over a decade. By early 1991, the Barre regime had collapse leaving a vast security and political vacuum inside the country.

Later in December 1992, the administration of George H.W. Bush sent 12,000 Marines into Somalia in what was called 'Operation Restore Hope.' The intervention was sold to the people of the U.S. and the world as a 'humanitarian mission' designed to address problems stemming from the drought and famine which had long plagued the country.

Nonetheless, by early 1993, Somalians had risen up against the intervention by the U.S., other western-imperialist states and United Nations forces occupying the nation. Dozens of Pentagon and UN troops lost their lives in a humiliating defeat that drove these military occupiers from Somalia in 1994.

Since this defeat in Somalia, the U.S. has never given up on controlling this region of Africa. With the overthrow of the socialist-oriented government of Mengistu in 1991, Washington enhanced its influence through working with the federal government in Ethiopia then headed by Meles Zenawi.

By 2006, the U.S. 'war on terrorism' was well underway with occupations taking place simultaneously in Afghanistan, Iraq and Haiti. In order to avoid the political fallout of another direct intervention, the Bush II administration encouraged Ethiopia to invade Somalia in order to displace the Islamic Courts Union (ICU) which had begun to consolidate its influence and stabilize the country after years of war and factional strife.

The main problem the U.S. had with the Islamic Courts was that it was operating outside of Washington's influence. After two years of the intervention by Ethiopia, Somalia was again facing famine with the worst humanitarian crisis in the world at that time.

Ethiopian military forces withdrew in early 2009 and sections of the Islamic Courts were won over to a Washington-backed Transitional Federal Government (TFG). A youth wing of the Islamic Courts arose known as Al-Shabaab (the youth) and began to wage war against the TFG demanding that all foreign forces be withdrawn from Somalia.

Beginning in 2007, the African Union Mission to Somalia (AMISOM) was formed with the bulk of its forces coming from the U.S.-allied government of President Yoweri Museveni of Uganda. Fighting has continued in Somalia since this time period with periodic and direct intervention by the Pentagon and the CIA.

U.S. and British bombing operations have been carried out against alleged Al-Shabaab and Al-Qaeda bases in Somalia. The country is also a base of operations for the U.S. drone programs which extends from the Horn of Africa all the way into the Indian Ocean islands of Seychelles.

In addition, the CIA has a major field station in Mogadishu and has maintained detention facilities inside Somalia imprisoning purported suspects in the 'war on terrorism.' The combined AMISOM forces now consisting of some 17,500 troops, receives training and funding from Washington.

The Somalia operation of the U.S. is part and parcel of the United States Africa Command (AFRICOM) which was formally started in 2008 under Bush but has been strengthened and enhanced by the Obama administration.

Kenya's intervention in southern Somalia in October 2011 had been planned for at least two years. The release of WikiLeaks cables in 2010 documented the plans and the role of the State Department.

In an article published by the Kenyan Daily Nation on December 17, 2010, it reports that 'The cables also say the military action took years of planning and was not a spontaneous reaction to abductions conducted by the Islamist group on Kenyan soil as repeatedly stated by government officials. The abductions seemed to provide Kenya with a convenient excuse to launch the plan, which, officials argued, was necessary to ensure protection against threats posed by an unstable neighbor.'

This secret plan, dubbed 'Jubaland Initiative,' outlined the creation of an artificial state in southern Somalia in an effort to choke off Al-Shabaab from the border areas near Kenya. At a meeting in Ethiopia in January 2010, the Kenyan delegation led by the-then Foreign Affairs Minister Moses Wetang'ula appealed for U.S. support in the operation.

In addition to U.S. involvement in Somalia and Kenya, the state of Israel also has close ties with the government in Nairobi. Israeli economic interests are much in evidence in Kenya where tourism hotels and other businesses such as the Westgate shopping mall are owned by capitalists who are citizens of the Zionist state.

Developments in Kenya and throughout the entire region of East Africa must be viewed within the context of U.S. economic and strategic interests in partnership with its NATO allies and the state of Israel. In recent years new findings of oil and natural gas all along the coast of East Africa is of course a source of imperialist interests in the region.

At the same time flotillas of U.S. and European Union warships have been occupying the Gulf of Aden off the coast of Somalia for several years under the guise of fighting piracy. Underlying this occupation of the Gulf of Aden is the vast economic resources that are transported through this waterway which is one of the most lucrative in the world.

The current government of President Uhuru Kenyatta in Nairobi was not the favored choice of the Obama administration during the elections in March. Washington supported former Prime Minister Odinga in the race and had issued veiled threats against Kenya if it did not vote the way the U.S. wanted.

Both President Kenyatta and Vice-President William Ruto are under indictment by the International Criminal Court (ICC) in The Hague. Ruto requested and was granted an adjournment of his trial that was taking place at the time of the Westgate mall attack pending the outcome of the standoff.

Kenyatta and Ruto are accused of human rights violations during the course of a violent dispute over the results of the previous elections held in late 2007. Their prosecution by the ICC has been rejected by the Kenyan government as well as the entire 54-member nations of the African Union.

The ICC has been severely criticized by the African Union due to its exclusive pre-occupation with prosecuting continental leaders. Sudanese President Omar Hassan al-Bashir is also under indictment by the ICC and could be denied a visa by the State Department to attend the UN General Assembly in New York even though Washington is not a signatory to the Rome Statue that created the ICC.

More Feature Article
ModernGhana Links
Who says Ghanaians relished the flavour of peace from 2009 to 2016?
This Is Why You Should Never Ask A White Woman Her Age Or Her Phone Number When You First Meet Her
Reviewing the Free SHS Policy
Why Has Fighting in Ukraine Led to Food Emergencies in Africa?
The Sun: A blessing to all, but to some than others?
Nobody, No Political Party, No Group Of People Have The Right To Mortgage A Nation’s Future And Shared Destinies Beyond An Agreed Stated Number Of Years
The Day Lions From Ahanta Mounted The Podium In Rome To Say Their Own Stories
Bringing Quality To The Services We Pay For
When vision is not served glory is not gained
TOP STORIES