A Tribute to Prof. Kofi Awoonor 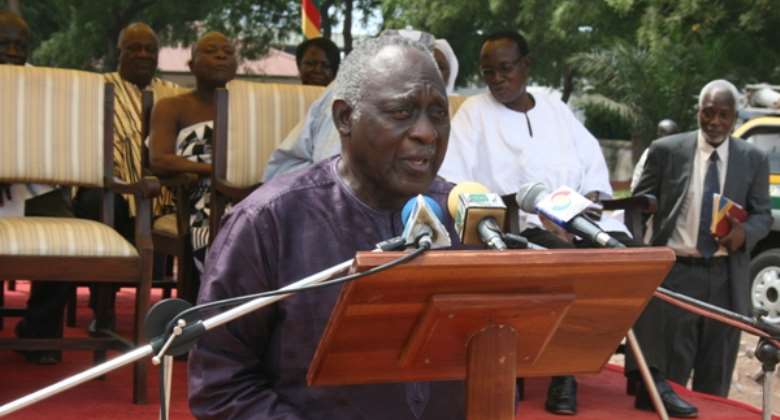 I remember rummaging through a collection of secondhand books one Saturday afternoon in New York, Manhattan, when I came across a book, a strange book, almost threadbare. And the book in question was 'This Earth, My Brother.' That was in 2007, I think, nearly five years ago. And it was authored by one of our own great rhapsodists Dr. Kofi Awoonor, as most of you well know. Prior to my chance encounter with 'This Earth, My Brother,' I had read his beautiful 'Rediscovery and Other Poems,' a task which, I believe, I also did in 1997, in the same New York. My maternal uncle's African American wife loves the fierceness and emotional fire of Prof. Awoonor's lyrical tongue and poetic psychology.

But Prof. Awoonor, like Wole Soyinka, William Faulkner, Derek Walcott, Toni Morrison, Ernest Hemmingway, just to name a few, was not the kind of writer one read with intentional celerity and youthful casualness. More straight to the point, Prof. Awoonor had an uncanny gift to officiate the marriage of words in a terpsichorean atmosphere to neutralize or disarm psychological inertia. Moreover, a stream of antagonistic and agreeable words managed to find a user-friendly community in his creative poetry, poetic chemistry.

His black poetic words glanced off white pages as the wiggling feet of our greatest traditional dancers glance off dancing floors. In fact, his facility of artistic creativity was one of a kind. And he was very difficult to read, too, at least for those of us who came from backgrounds of pure mathematics and the natural sciences. Then again, his 'This Earth, My Brother,' like Aryee Kwei Armah's 'The Beautyful Ones Are Not Yet Born, richly add to the fictionalized milieu of post-Nkrumah Ghana. We may even extend the evaluative wings of our rubric to include his work, primarily'This Earth, My Brother'in the body of post-colonial scholarship or in social/political critical theory.

Ngugi wa Thiong'o's 'Petals of Blood,' Chinua Achebe's 'Man of the People,' and Wole Soyinka's 'The Open Sore of a Continent,' again, to name just three, critically address many aspects of our checkered post-colonial collective experience. Prof. Awoonor's 'This Earth, My Brother' belonged in the same class with these literary giants. In poetry, he joined the enviable ranks of Wole Soyinka, Derek Walcott, Kofi Anyidoho, Efua Sutherland, Atukwei OkaiAnd what of his 'The House by the Sea'? Doesn't it belong in the classics of our great prison memoirswa Thiong'o's 'Detained: A Writer's Prison Diary, Soyinka's 'The Man Died,' and, possibly, Mandela's 'Conversations with Myself'? Indeed, the intellectual octopus of Prof. Awoonor ran all over the place like a hyperactive child in a candy store!

I once visited my friend, Temple University Dr. Molefi Kete Asante, the father of Afrocentricity, in his office, 2009. Dr. Asante shared his fond reminiscences of the great Prof. Awoonor with me. Among other narrative accolades, he told me how they had met in Brazil when the professor served as Ghana's ambassador there. Dr. Asante spoke greatly and respectfully of him as well as of his large body of work. Further, Drs. Henry Louis Gates, Jr. and Kwame Anthony Appiah also acknowledged his work in 'Africana: The Encyclopedia of the African and African American Experience.' Could we ask for more?

Prof. Awoonor contributed significantly to Africa's democracy, serving as a member of Ghana's Council of State across presidencies. Apart from serving Ghana in an ambassadorial capacity in Brazil, from 1984-1988, Prof. Awoonor also served as Ghana's ambassador to the United Nations, from 1990 to 1994, and to Cuba. In the United Nations he chaired the committee against Apartheid. His body of work enriched Ewe, Ghanaian, and African culture. His immense contributions to the growth of English as an international language are not in doubt. He also made the academic intercourse between Ewe and English the romantic envy of nativist theories about other Ghanaian languages!

Prof. Awoonor was born George Awoonor-Williamsin 1935. He studied at Ghana's University College, London's University College, and State University of New York at Stony Brook. He earned his doctorate at the latter institution and taught comparative literature there before finally returning to Ghana in 1975. Prof. Awoonor taught at University of Cape Coast. But Prof. Awoonor was in Kenya to do what he did best, the 'science' of oratory, storytellingStorymoja Hay Festival, 2013, and, unfortunately, was caught up in the crossfire of Islamic terrorism, killing him.

The word 'moja' in "Storymoja" is a derivative of 'umoja,' meaning 'oneness' in Swahili. And 'moja' or 'mogya' is 'blood' in Asante-Twi or Fante-Twi. What then does 'moja' say about African unity and our personal lossProf. Kofi Awoonor? Will Africa take a moment of silence to reflect on what foreign religions and ideas are doing to our culture and to ourselves as a people? Sad but true, our great scholar, linguist, and man of letters, Prof. Awoonor, passed on in the same land whose leader, Jomo Kenyatta, jailed Ngugi wa Thiong'o for criticizing his and his inner circle's post-colonial colonialist politics, a neocolonial situation befitting the critical acknowledgement and narrative power of 'This Earth, My Brother'!

This is how I will end the tribute: M. Keith Booker's edited volume 'The Chinua Achebe Encyclopedia' and Achebe's own 'Hopes and Impediments' quote Achebe in the essay 'Kofi Awoonor as Novelist': 'Through this teeming allegory we catch glimpses of the hero Amamu at significant moments in his lifethe catch phrase 'glimpses' is in fact misleading, since we know that even in those sequences that are most remote from him personallyIt's Amamu who is stretched on the rack and also Africa whose story his life parallels in its purposelessness and self-destructiveness.' This is what is expected of cultured and Afrocentric thinkers, men and women who critique and defend each other's work on the African world with creative dignity in atmospheres of mutual respect. And the book Achebe commented on is none other than the great 'This Earth, My Brother.' Similarly, Soyinka critiques and defends the African world in his 'Myth, Literature, and the African World.'

In fine, rather than translating the works of Shakespeare into Swahili, Julius Nyerere could have translated the works of creative African activist-thinkers into Swahili. As Ghanaians and Africans we must learn to appreciate as well as to read more of the 'living' works of the Kofi Awoonors, of the Toni Morrisons, of the Kwame Nkrumahs, of the Ama Ata Aidoos, of the Wole Soyinkas, of the Molefi Kete Asantes, of the Chimamanda Adichies, of the Chinua Achebes, of the Farah Nuruddins, of the Ama Mazamas, of the Ngugi wa Thiong'os, and less of the 'dead' works of the Shakespeares and of the Joseph Conrads! Let's do justice to his creative legacy.

We commiserate with his family and wish his son a speedy recovery. Let's take consolation in the following African proverbs: 'That life defines the beginning of death' and 'That one's grave will forever be loved and appreciated even if one were a good person upon death'!

The emotional crossroads: The great professor meets Chinua Achebe, Steve Biko, Cheikh Anta Diop, the death of Apartheid and of colonialism, and Shakespeare in the creative anthology of socialized otherworldliness. I bet what he'll say to them about neocolonialism and about the plagiaristic claims leveled against the non-existent grave of Shakespeare. Rest in everlasting peace, Prof. Kofi Awoonor.