The Ghanaian Legal System is a Joke 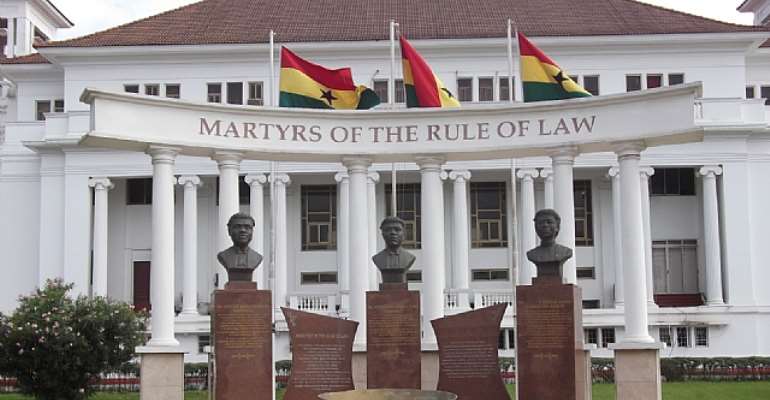 I had a considerable amount of respect for and an abundant faith in the Ghanaian legal system until two reckless politicians, rightly accused of 'criminal contempt', were spared a custodial sentence apparently for absolutely ridiculous reasons, namely: defence counsel's sense of humour, his birthday occurring a day after the hearing, and his friendship with the panel of judges deciding his clients' fates.

It is widely believed that Mr Kwadwo Owusu-Afriyie, popularly known as Sir John and Mr Hopeson Adorye skipped a potential jail sentence because their lawyer, Mr Ayikoi Otoo exhibited a substantial sense of humour, was a comrade of and respected by the panel of judges, and because he pleaded to be offered 'victory' as a birthday present. This was in fact confirmed by Mr Ayikoi Otoo himself in an interview with Adom FM a day after the encounter. If these tactics and circumstances are enough to win cases in Ghana, then our legal system is a complete joke, as young and less-known lawyers may never win a case in court.

As a former Attorney General, Mr Ayikoi Otoo without an iota of doubt is a respectable and reputable lawyer, and did what he thought could save his clients from going to jail; luckily for him, the strategy worked. However, it would be very wrong and naïve for anyone to vilify Mr Atta Akyea for not adopting the same or a similar strategy in court a couple of weeks earlier to avert a ten-day jail sentence that his client was made to serve. This is because each of these lawyers handled substantially different cases.

Serious defence lawyers are not supposed to be beggars and comedians in court; they are supposed to use evidence and logical argument to fight legal battles for their clients. Begging or pleading is resorted to only when the offence is superlatively indefensible and the evidence against the defendant is overwhelmingly undefeatable.

Were Hopeson Adorye and Sir John's offences hugely indefensible? Absolutely; they had virtually no defence. The former openly and unambiguously campaigned for violence if verdict wasn't in his party's favour, whiles the latter blatantly insulted the nine-member panel of Supreme Court judges hearing the presidential election petition, particularly the gentleman chairing the panel. There was thus only one sensible option available for the contemnors and their lawyer(s) to opt for - showing genuine remorse for their transgressions and asking for clemency or leniency.

Did Mr Ken Kuranchie's offence seem supremely indefensible? Absolutely not; and I know many a good lawyer would agree with me. Ken Kuranchie's only 'crime' was describing the nine-member panel of judges as 'hypocritical and selective'. His comment was informed by the judges' decision to bar Mr Sammy Awuku from entering the court room for the remaining part of the hearing, after making what was considered to be a misguided comment.

Was Ken Kuranchie's comment based on evidence? It most certainly was. Prior to Sammy Awuku's statement, several groups and individuals belonging to various political parties had made similar or even more serious comments but had been allowed to go scot free for reasons known to the panel alone. So Kuranchie was only expressing genuine concern about the judges' failure to deal with those who had earlier made and were still making contemptuous comments; and these included supporters of NDC and NPP. He thus had nothing to be remorseful for/about on this occasion; and his lawyer did exactly what I would have done if I were in his position.

It must be recalled that Mr Stephen Atubiga who was also made to appear before the same panel along with Kuranchie for sounding a war horn, was probably much more remorseful and apologetic than Sir John and Adorye, yet he was not spared a jail sentence; so what makes people think Kuranchie would not have gone to jail if he had been remorseful and his lawyer, Mr Atta Akyea had employed Mr Ayikoi Otoo's tactic?

Atubiga and Adorye made almost the same contemptuous comment, and both showed considerable remorse in court; yet the former was jailed but the latter wasn't. Doesn't this obvious inconsistency exhibited by the panel justify the comment for which Ken Kuranchie went to jail, and vindicate him?

The apparent fact is that the two contemnors, Sir John and Adorye unlike Kuranchie had no defence, but for some obvious reasons, they were never going to be jailed. So people should stop drawing unnecessary comparison between Mr Ayikoi Otoo and Mr Atta Akyea, unjustifiably marginalizing the legal competence of the latter. If humour and jokes could win cases all the time, then Super O D and Funny Face among others could make great barristers in Ghana; and surely, most accused people wouldn't need defence counsels if defence is all about showing remorse and begging in court.

However, if lawyer Ayikoi Otoo's tactic is anything to go by, then defendants from now onwards may have to consider soliciting the services not only of lawyers who can make humorous comments and are close pals of judges hearing their cases, but also of lawyers whose birthdays fall just a day before, a day after, or on the day of their trial. Who knows, the humour and the birthdays of the lawyers as well as their friendships with presiding judges could secure the alleged offenders leniency or even total forgiveness.

Emmanuel Sarpong Owusu-Ansah (Black Power) is an investigative journalist, educator, and a researcher