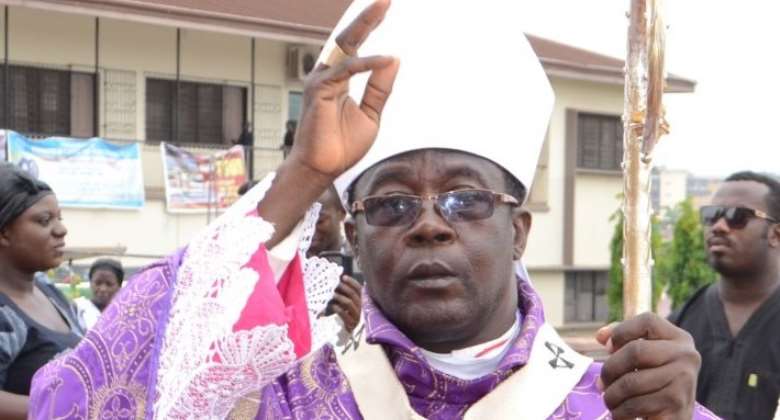 On Saturday the 2nd of January 2021, one of my brothers, Martin Akwasi Appiah, passed away. He was a baptised Catholic, a staunch and active member of the St Agnes Catholic Church in Maase Offinso, and a communicant. Unfortunately, the family could not perform the burial and final funeral rites on the scheduled date (which was March 2021) due to various covid-19 restrictions that were in place at the time. When the restrictions were eased, his burial and funeral ceremonies were rescheduled for 17th July 2021; and invitations were accordingly sent to friends and loved ones.

On Sunday the 11th of July 2021, my sister, Felicia Owusu, also died. Like my brother and most members of my extended family, she was a baptised Catholic and an active member of the St Agnes Catholic Church. My uncle, Emeritus Archbishop Sarpong and his younger brother, Nana Osei Sarpong decided and insisted that my sister’s funeral rite be performed together with that of my brother on the 17th. But her (the deceased’s) children and siblings, and other members of the family objected on the following grounds: (1) that among the Akans (particularly the Asante) a funeral ceremony is performed only after the so-called, ‘One Week Rite’ has been observed; (2) that most of her friends and loved ones, as well as some members of the family, did not even know about her demise and that it was important to extend the funeral date by, at least, one more week; and (3) that the views of her three adult children and/or siblings were not sought before the decision was taken by my two uncles.

In fact, one of the deceased’s children suggested that we extend Martin’s funeral date by just a week or two so we could have enough time to make the necessary preparations to celebrate the two funerals together on the same day/date. But my two uncles, particularly Emeritus Archbishop Sarpong’s younger brother, would not heed; they were bent on having the two burial and final funeral rites performed on the 17th of July. As we know, the loss of a loved one is life’s most stressful event and can cause a major emotional crisis, particularly for those close to the deceased. This justifies why it is very important to always involve all close family members and respect their views when making decisions concerning burial and final funeral arrangements. The two uncles were therefore being insensitive to the feelings of my sister’s children, particularly her daughter, when they tried to impose their decision on them.

The reality, however, is that among the Akans (a matrilineal society), particularly the Asante, the children of a deceased woman and, to a significant extent, her siblings, are supposed to have the final say on when and how their mother’s or sister’s funeral should be celebrated. Not even the Abusuapanin (head of the extended family) can impose his decision or opinion on them. Since my sister’s three children are all adults (aged between 30 and 38 years) and capable of arranging and conducting their mother’s funeral with the help of their uncles, their objection to Emeritus Archbishop Sarpong and his brother’s decision to bury their mother and perform her funeral rite hastily, could not be overruled. The children and siblings of the deceased were emphatic about performing her final funeral ceremony on a later date and not the 17th. There is no question, that my two uncles felt embarrassed and bitter about my sister’s children and siblings’ resolve to disregard their unilateral decision. It must be stressed here that Martin’s funeral arrangements remained unchanged.

However, on Friday the 16th of July, 2021, around 3:30 pm (less than 11 hours before the commencement of Martin’s funeral), the family received a message from the parish priests that Archbishop Gabriel Anokye, head of the Metropolitan Archdiocese of Kumasi, has instructed them to prevent my family from bringing the remains of my brother, Martin, into the St Agnes Church or, indeed, any catholic church in Kumasi; and that they are to refrain from performing any requiem (Mass or burial/church service for the dead) for him – not even in our own house where the body was meant to be displayed for public viewing. This order applied to all Catholic priests, deacons, and catechists who fall within/under the jurisdiction of the Archdiocese of Kumasi. The priests however indicated that we could come to the St Agnes Catholic Church on Sunday the 18th of July 2021 for the Thanksgiving Service.

The parish priests further explained, when interrogated, that Archbishop Anokye’s directive or decision was informed by a phone call from Emeritus Archbishop Peter Kwasi Sarpong that there was a pending dispute/disagreements (‘mansoo’, to use the right Akan vocabulary) over the funeral arrangements of my brother, and for that reason, a requiem could not be performed for him in the Catholic Church or elsewhere by any catholic clergy or catechist. To say that I was baffled by this revelation is an understatement.

I sent a lengthy text message to Archbishop Anokye at 9:15 pm, stressing that there was no dispute over my brother’s funeral arrangements, and therefore we would be grateful if he could reconsider and rescind his decision. Approximately an hour later (10: 22 pm) the Archbishop responded to my text message, arguing that the decision to not allow my brother’s remains to be brought into a catholic church and to stop his priests and catechists from holding a requiem for him was a “pastoral decision”. Even though he appreciated that the situation was purely a family matter, he was unwilling to rescind his decision.

On the 17th of July 2021 (which was the burial and final funeral day), my brother, a born and baptised Catholic, an active member of the church, and a communicant, was rejected by the Church, and his burial service had to be conducted not by a Catholic clergy or even catechist but by an Elder of the Church of Pentecost. If this is not disgraceful, then what is? I can however confirm that my brother’s funeral was peaceful and solemn; the entire Offinso community and people from all walks of life came to support and sympathise with the family.

People say that Emeritus Archbishop Sarpong is a very powerful figure in Ghana, and he, indeed, believes that he has the power to do whatever he wants. His friends are past and sitting presidents, renowned monarchs and top politicians, among others. If he wants something, all he needs to do is pick up the phone and call or just write a short note, and things will happen. No one wins an argument or a case against him; his views are final and should never be contested – he and his brother are invincible. There is absolutely no question that Emeritus Archbishop Sarpong compelled Archbishop Anokye to do what he did not because there is any such rule, but because he has the power to do so, and to ‘retaliate’ or ‘punish’ us for disregarding his decision concerning my sister’s funeral arrangements. He might have succeeded in flexing his muscles on the 16th and 17th of July 2021; but will he be able to flex it all the time and forever? Definitely not!

It is unfortunate that Archbishop Gabriel Anokye, a gentleman I have known and admired from childhood has been dragged into this controversy. But as the head of the Metropolitan Archdiocese of Kumasi, he is expected to be his own man, resolute and fearless, a man of integrity, and a man who defends the defenceless (including the dead). Unfortunately, these qualities have not been demonstrated on this occasion. As a result of his controversial decision and directive, the faith of many Catholics in my town is either diametrically dismantled or now hangs in the balance. I strongly believe that what the two Archbishops did is tantamount to what is referred to, in legal terms, as ultra vires (abuse of power or acting beyond the scope of powers granted by the Church). For this reason, I would be very grateful if the experts could help me address the following questions:

I know many people, like myself, may not fancy the idea of keeping dead bodies in the morgue for ages. But I believe they appreciate that the question at stake is not whether it is advisable for the body of my departed sister (or indeed any deceased person) to remain in the morgue for weeks or months, but whether or not the church had a moral, religious and/or legal duty/responsibility to hold a burial service (requiem) for my brother on the 17th of July 2021. I personally do not believe that requiems can influence or change the destination of a deceased person; but some members of my family do not share my views on this, and therefore their beliefs and expectations should be respected.

I may explore the possibility of initiating legal proceedings against the Archbishop of Kumasi and the Archdiocese of Kumasi for causing extreme emotional distress to me and some members of my extended family and for denying my brother the ‘right’ to have his mortal remains brought into a catholic church for a requiem. The question as to whether or not the dead has any rights is, indeed, debatable. However, since my brother decided to remain a Catholic, believing, inter alia, that the relevant rite (a requiem) would be performed/held by the church after his death, any unreasonable decision by any entity (archbishop, bishop, priest, catechist, etc.), at the eleventh hour, that sank this expectation into oblivion might be a violation of the deceased’s ‘right’.