A Good Samaritan Is Entitled To ‘Enslave’ You: An Emerging Ghanaian Norm 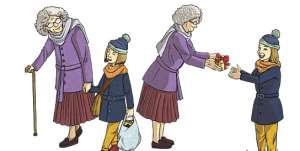 There is no question that the phrase, ‘one good turn deserves another’, is a popular universal aphorism. I refer to it as a universal dictum because similar or equivalent proverbs exist in different languages in various cultures or societies – e.g. manus manum lavat (Latin, literally, one hand washes the other); nsa ko na nsa aba (Akan, literally, hand go, hand come, or as you give, so shall you receive); etc. The maxim, ‘one good turn deserves another’, as many readers might know, simply means that when someone does you a favour or does something good for you, you should endeavour to reciprocate the kind gesture. Very few people, if any, may challenge the reasonableness and relevance of this principle. It is almost natural that if people help us with something, we help them in return when they need our help and we are able to offer it (this, of course, is not to deny the fact that some folks have dead conscience or stony hearts, and would overlook the genuine needs of a person who has been generous to them in the past, even if they have the means to help).

The problem, however, is that this beautiful universal principle (or aphorism) is unfortunately being misconstrued, misinterpreted and misapplied by many Ghanaians and, indeed, Africans. The Ghanaian interpretation is that when people do something good for you, it becomes imperative for you to do their bidding always; support and defend them at all times, even when they are involved in serious scandals or misconducts; and to always turn a blind eye to their misdeeds. Doing the contrary is deemed to be tantamount to being ungrateful and/or disrespectful. Thus, according to this logic, you should not resist if someone who, for instance, fully funded or partly sponsored your education attempts to slash your throat with a machete; you should succumb if someone who has been kind to you in the past begins to enslave you; and you should not complain if an individual who has done you a favour in the past, uses your precious knife to dissect a viper.

It is this flawed interpretation of the aphorism in question and the ensuing seemingly established norm that, perhaps, triggered the emergence of the Akan counter-maxim, s3 obi y3 wo papa a na waha wo (when someone does you a favour, he puts you in a difficult situation; or accepting/receiving favours from others puts you in a dicey situation). The difficult or dicey situation is that, you may not be able to complain even if they (the ‘Good Samaritans’) do you a great wrong or cheat you or violate your fundamental rights; and you may not be able to speak against or condemn their transgressions – you literally become a slave. Indeed, the obnoxious culture/practice of crucifying Impartiality, Integrity and Moral Principles in order to please an individual to whom one feels he/she owes a debt of gratitude, has become alarmingly endemic in the Ghanaian society. Thus, an Attorney General may be unwilling to prosecute a criminal in position of authority because the offender funded his law programme at the university; a sitting bishop may find it difficult to disregard a scandalous request/instruction from a retired bishop because he (the retired bishop) facilitated his appointment as a bishop; a nephew/niece or grandnephew/grandniece may be unwilling to condemn the nauseating and unwarranted behaviour of their uncles or granduncles because they (the uncles or granduncles) helped them acquire visas to the western world; a mother may be unwilling to report a man who sexually defiles her underage daughter to the relevant authorities because the perpetrator helped pay their (mother and daughter’s) hospital bills when they were admitted to the hospital; etc. Evidently, such a culture only leads to retrogression and augments the rate of injustice, corruption and other severe misconducts in society.

Only a principled person can surmount such a despicable culture or ethos. However, taking a principled stand against the misdeeds of a person who has been kind to you in the past or is still being helpful to you may, unfortunately, be viewed by some people as a sign of ungratefulness or disrespect. Simply put, many people do not realise that there is a very significant difference between being ungrateful and being principled. Obviously, in endeavouring to be principled, toes may be stepped on, and aggrieved parties may skin you alive or attempt to mortify you, but these should not be a reason to crucify Impartiality and Integrity. Ipso facto, the aphorism, ‘one good turn deserves another’, entails two main principles: (1) that the good turn (or good deed) being rendered should be lawful, and (2) that the reciprocal deed should not only be lawful but necessary and reasonable. In other words, one does not have to repay a good deed by hook or by crook – the repayment gesture should be done in a way that is legal, relevant and reasonable.

My uncle, Emeritus Archbishop Sarpong, for instance, partly funded my primary and secondary education (may God bless him for this kind gesture). Ironically, it was this same individual (my uncle) who, together with his younger brother (Nana Osei Sarpong), unreasonably (and perhaps unlawfully) killed my initial dream of becoming a priest in 2003. Yet, when he was attacked in 2012 by some members of the Convention People’s Party (CPP) following a lecture in which he stated that Nkrumah allowed the unrestrained love for power to turn him into a dictator, I wrote a quite lengthy rejoinder to defend him and to justify his assessment of Nkrumah’s strengths and weaknesses (see “Rejoinder: CPP Replies Archbishop Akwasi Sarpong”, 21/06/2012, GhanaWeb and ModernGhana). When he was celebrating the 60th anniversary of his ordination to the priesthood in 2019, I penned an article to eulogise him (see “Celebrating an Unsung Hero: Congratulations, Emeritus Archbishop Peter Akwasi Sarpong”, 16/12/2019, GhanaWeb and ModernGhana). When he published his autobiography, “From the Hut to Oxford”, I wrote two articles, one of which was published on various online media outlets (see “Book Review: ‘From the Hut to Oxford’: The Autobiography of Archbishop Peter Kwasi Sarpong”, 25/04/2020, GhanaWeb and ModernGhana); the other article is currently being considered for possible publication in a very renowned peer-reviewed journal. Note, that no family member, up to this point, had ever accused me of being ungrateful.

When, on 16th and 17th July 2021, my uncle compelled the Archbishop of the Catholic Archdiocese of Kumasi to make one of the most scandalous decisions ever made by a senior Catholic clergy (a decision that over 98% of the experts and ordinary people that I have spoken with condemns), I published an article to tell the world about it and went ahead to report the matter to the relevant authority – the Apostolic Nuncio to Ghana – who is the Pope’s representative in the country (see “The Archbishop of the Catholic Archdiocese of Kumasi Makes a Scandalous Decision”, 26/07/2021. ModernGhana: https://www.modernghana.com/news/1094951/the-archbishop-of-the-catholic-archdiocese-of-kuma.html). Interestingly, a cousin and a niece (the only strangers and uninformed entities in ‘Jerusalem’) had the audacity to dub me an ungrateful and stubborn Ekuona man (Ekuona is one of the eight Asante or Akan clans – it is the clan that I and my family belong to even though we find ourselves within the Offinso paramountcy, which is predominantly Asona). Surely, the events highlighted above portray me not as an ungrateful nephew, but as a principled and bold Ekuona royal – a man who calls a spade a spade.

What people should realise is that “No man is an island, entire of itself”– all humans depend on each other for survival. Without a doubt, all human beings are ‘designed’ to be both givers and receivers, just that some happen to be more generous than others. No adult (whether a president, cardinal, archbishop, politician, doctor, etc.) can confidently claim that he/she has never been a recipient of the helpful act or kind gesture of other human beings apart from their parents. Besides, even the stingiest or meanest human entity on earth may occasionally do some acts of charity. It is therefore unreasonable and unfair to expect people to overlook the mistreatments and bullying you subject them to, just because you have helped them in the past and are, perhaps, in position of authority. It is equally wrong for people to succumb to the instructions of people who have helped them, knowing that the request or instruction is manifestly/palpably unlawful and unreasonable.

As a matter of fact, the good deeds that some of us have done and are still doing for fellow human beings could significantly eclipse those of most known philanthropists in Ghana and probably West Africa, including archbishops and bishops. One thing that I, for instance, never do unless it is absolutely necessary and relevant, is letting people know what I do for others. So, dear giver, helper or Good Samaritan, it is about time you appreciated that you are not the only philanthropist on earth. Therefore, do not expect your beneficiaries to do your bidding at all cost just because you have done them a good deed. Certainly, your beneficiaries may be compelled to endure your bullying in silence, or sweep your misconducts under the carpet; but for how long? As the Akan adage goes: s3 nsuo taa aponkyerene a ogye woo (when too much water enters the body/system of a frog, it vomits by emitting a roaring sound). This, I must admit, is the exact state in which I find myself at the moment; and I will not stop fidgeting until all the excess water, that is making me feel exceedingly uncomfortable at the moment, gets out of my system.