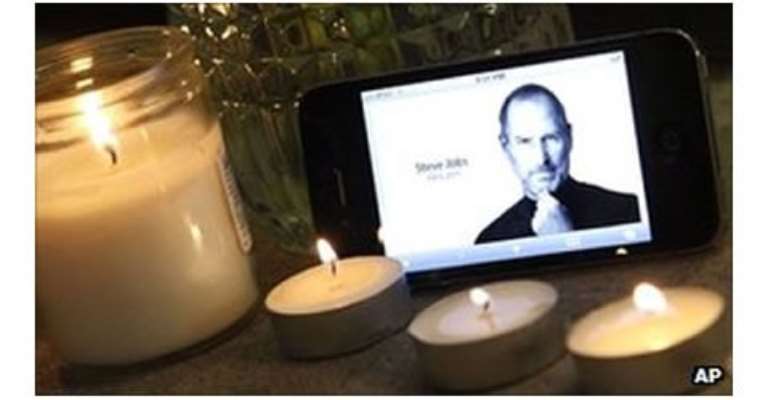 Steve Jobs died in October 2011 after a long battle with cancer.

A movie about the early life of Apple co-founder Steve Jobs premiered Friday night at the Sundance Film Festival to mixed reviews, with some critics saying it presents a fawning, one-sided portrait of the late tech icon.

"jOBS" stars Ashton Kutcher in the title role and dramatizes selected highlights of Jobs' life, from his formative months at Reed College to the 1984 debut of the Macintosh to the triumphant unveiling of the iPod in 2001. Co-starring Josh Gad ("1600 Penn," "The Book of Mormon") as business partner Steve Wozniak, the film focuses on Jobs' celebrated role in pioneering the personal computer.

"Over and over again, minor characters explain to him why something can't be done; Kutcher-as-Jobs smiles enigmatically and waves away their concerns," writes Casey Newton for CNET.

"Each time, he speaks of how the technology Apple is building will improve the lives of average people. Co-workers argue with him, but they never get anywhere, because their parts are poorly written and the filmmakers have no interest in showing their subject being wrong about his work," Newton continues.

"(A)ll Apple failures in 'jOBS' are portrayed as the result of conservative, backward-thinking executives beholden only to their shareholders. The result is that the viewer spends two hours watching cardboard cutouts lose arguments to Ashton Kutcher."

Matthew Panzarino of The Next Web has a more charitable view of the movie.

"There will be those who will attack the accuracy of the film, and there are plenty of chances to do so. Significant swaths of technical development of the Macintosh and Lisa computers are simply not present," he writes.

"But, overall, 'jOBS' works. ... This isn't going to be the canonical Steve Jobs biography movie. Honestly, Jobs was such a complex individual that I can't see one ever being made. But, as an impressionist portrait of a specific period in his life, it's successful."

Some observers had questioned Kutcher's ability to portray such a complicated and familiar figure. But both critics had praise for the actor's performance.

"He throws himself into the role, inhabiting Jobs in his mannerisms and gestures while doing a more than creditable impression of the man's voice. Kutcher also captures Jobs' deliberate, slightly hunched-over walk," writes CNET's Newton. "At moments, as during an enjoyable sequence in which Jobs recruits members for the Macintosh team, Kutcher disappears into the role."

"jOBS" attracted some controversy last week after a scene from the movie was posted on the Internet. In the clip, Jobs raves about the commercial potential of an operating system that Wozniak has created.

"Nobody wants to buy a computer," says Wozniak. Replies Jobs, "How does somebody know what they want if they've never even seen it?"

Wozniak told Gizmodo that the scene's characterizations were inaccurate.

"We never had such interaction and roles," said the Apple co-founder, who has not seen the whole film. "I'm not even sure what it's getting at ... personalities are very wrong, although mine is closer."

In response, the filmmakers behind "jOBS" issued a statement saying the movie "is not a documentary, nor is it meant to be a blow by blow, word for word account of all conversations and events. ... The filmmakers acknowledge that not every single thing in the film is a precise representation of what took place, but is feature film entertainment."

Steve Jobs died in October 2011 after a long battle with cancer.

"jOBS" is scheduled to open in theaters April 19.
Meanwhile, production is under way on another film about Jobs' life, written by Aaron Sorkin ("The Social Network") and based on Walter Isaacson's best-selling book. Wozniak is a consultant on that film.