The Lunatic Fringe of Chinese Immigrants Must Be Reprimanded-2 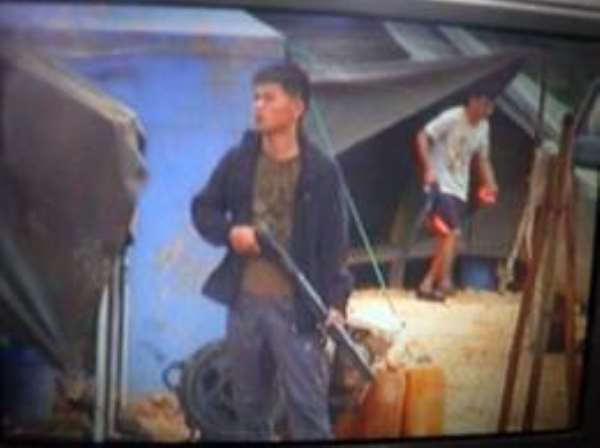 May I ask: Which independent country on planet earth, would look on nonchalantly, whiles obstreperous immigrants are despoiling its natural resources? The answer is Ghana! How can we look on unperturbed, and allow the contumacious Chinese immigrants to seize our rural areas, and forcibly dig our gold, destroy the environment and above all, terrorise the rural dwellers? Where is the leadership?

After fifty five years of independence, you would expect a nation like Ghana to be in contention with the likes of South Korea, Malaysia, and Brazil etc. But, due to leadership paralysis, we are at where we are today. We are surrounded by individuals we may call leaders, but in actual fact, they are not true leaders.

In fact, I have been inspired by the numerous positive comments posted on part one of this article, hence the need to delve further into the seemingly cyclopean environmental catastrophe. This is no exaggeration, because, as it stands at the moment, and, no attempts to circumscribe the illegal activities of the indocile Chinese immigrants in our country sides, we are, of course, heading towards gargantuan environmental catastrophe.

Based on the numerous encouraging comments posted on the earlier article, I am certain that after all I am not standing alone; many discerning Ghanaians are with me. They, the discerning commentators, of course, fret the apocalypse of the Chinese 'mass destruction in our rural areas. And, worse still, the leadership is looking on nonchalantly, whiles the fractious immigrants, with the able support of some criminal elements in the society are destroying our rural areas.

Now, let us look at some of the comments posted on the earlier article. Due to data protection Act, and out of deferential regard for anonymity, I have decided to obliterate the names of the commentators.

Commentator 'A' opined: “The activities of these Chinese in our villages cannot be blamed on the Chinese, but on Ghanaian authorities”. “In the first place, who gave them visas to come to Ghana, and on what grounds were the visas issued”. “Second, who gave them certificates of concessions to our land to mine if they have one?

“Third, where are the chiefs, DCEs, Assemblymen and women, the District Assemblies and the police in these affected areas”?

“Fourth, hasn't the central government heard the cries of our innocent brothers and sisters in these areas”?

“The situation is a disgrace to democratic Ghana”. “What kind of leaders are in the country”? “Were they elected to protect and promote the lives of the citizens or were elected to amass wealth”.

“There is truth in the notion that these Chinese' evil activities are in the known of our so-called leaders”. “It is shameful to see these Chinese with guns chasing after the indigenous who protest their activities without arrest”. “We are breeding chaos. We should learn from Nigeria, where communities formed gangs to fight oil companies that destroyed their lands without providing them with amenities”. “The government of Ghana should not be surprised to wake up one day to find militants in our communities ready to protect their ancestral land and resources.

“Ghanaian leaders have become so corrupt and greedy that they don't care about the lives of their people and the future generation. They are so weak to sell their "birthright" to foreigners to "invade" our land. But they should know that posterity will not forgive them”. “Most of these leaders claim to be Christians and Moslems, who believe in eternal judgment. They should read their Bible and Koran again to know that God would hold them responsible for failing to execute their duties as required”.

“But before then, as already said, they should blame themselves if the voiceless decide to be heard by taking arms to protect their "birth right".

Another Commentator also expressed his disappointment: “name sake, I share with you your sentiment. “Do we have leaders who really are ready to lead or just pocket fillers? It's so Sad! “I had à break-down ounce on my Way to Cape Coast and what I saw was heart breaking - a nation being milked not by her citizen, but these Chinese”. “At least at that short time to get my car fixed. I witness how our men in uniform trade with these Chinese with earth-moving machines”. “They will stop them alright as expected of duty officers only to see them exchanging handshakes, the next minute the Chinese miners move on with their machines”. “Then you ask yourself- what's in it for them? The poor Ghanaian only dugs with his shovel and pick axe. How on earth could we allow this to happen to mother Ghana”?

“If we do not wake up to redeem our nation, leaders will come and go but nothing will happen. The only need power to ensure that, the nation is ripped off better than their predecessors. We must stand and fight for our nation”!

Concluding remarks
In my opinion, the authorities are not doing enough to stop the 'mass destruction of our country sides by these Chinese immigrants. I must admit, I take exception to the school of thought who put the blame solely at the doorsteps of our chiefs. The chiefs are, of course, must take some of the blame for looking on somehow unconcerned, and allowing these Chinese to destroy their lands. But, my disagreement stems from the fact that the chiefs do not own the resources beneath the land, the chiefs only have power over the lands. It is the government of Ghana who owns the resources, and has entrusted the Ghana Mineral Commission to oversee the mining activities in the country. In this instance, you would expect the authorities to intervene in the illegal activities of foreign invaders, if indeed the Mineral Commission of Ghana has not issued these people with the necessary documentations that will allow them to undertake such mining.

As a nation, we cannot and must not stand aside and watch whiles foreign invaders are seizing our rural areas, digging our mineral resources forcibly, terrorising the rural dwellers and destroying their livelihoods. To the authorities: Act now, because procrastination is not the solution to a potential problem.

NPP must engage the grassroots if they want to win 2024 elec...
8 minutes ago