Have Nigeria, South Africa, and Gabon betrayed the African Union? 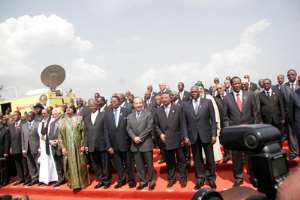 When the rebellion against Libya's Muammar al-Gaddafi erupted, the African Union registered its concern and called for circumspection while making moves toward a non-violent solution other than the current international military operations against Libya. The AU condemned the Gaddafi government's over-reaction and feared that any intransigence would worsen the crisis in that country. Specifically, the AU opposed any military operation by foreign forces in Libya. Unfortunately, however, the AU's voice was not heard. Libya is now a sad case of a still-born diplomacy.

The fact that the proponents of this international military operation didn't respect the AU's voice or stance on the Libyan crisis leaves a sour taste in the mouth, especially when viewed within the context that Libya is in Africa and is a staunch member of the AU. Why isn't any reference being made to the AU but rather the Arab League in the search for moral justification to continue pounding Libya?

The three African countries that supported the UN Resolution 1973 (Nigeria, Gabon, and South Africa) seem to be mere pawns in the military game of the International Coalition. Their decision to support that resolution, however, gives much cause for concern. Moral justification for what they did is difficult to find except that they bought into the general call for Gaddafi to “go.” My contention is that they betrayed the African Union's cause and must bow their heads in shame.

By their action, these three African countries have contributed much legitimacy to the International Coalition's military operations that are currently devastating Libya. Rather intriguingly, though, these African countries are no more in reckoning after the sell-out. All we hear is about the Arab League, and fears abound that if the current criticisms against the extent of devastation angers the Arab League, the International Coalition risks losing support from the Arab World for its actions.

Before the decision to attack Libya was taken and acted on, there were clear indications that the African Union had already begun moves to work toward a peaceful resolution of the Libyan crisis; hence, its vitriolic opposition to any military intervention of the kind that the International Coalition has unleashed. The AU Secretary-General had begun moves to dispatch a Special Envoy to create the atmosphere for dialogue between Gaddafi and the rebels. The West, however, didn't want to give peace a chance and seemed to be following a premeditated line of action to cripple Gaddafi and bring Libya down to its knees.

The position of the AU was completely disregarded by the UN Security Council, which paved the way for Resolution 1973 to be endorsed by 10 of the 15-member Council to warrant the devastation now going on in Libya. By endorsing this international military action against one of their own, Nigeria, South Africa, and Gabon have given the AU a bad name in international circles.

But these are countries whose own political history is full of barbarity. I will identify some crucial moments in these countries' life to suggest that at one time or the other, they faced problems that are tearing Libya apart and should have been more conscionable in their over-enthusiasm to go to bed with the West.

The Nigerian Story of Woes
Nigeria has over the years had a peculiar internal political conundrum that makes one wonder why it will support an international military operation of the kind now devastating Libya. Nigeria's own peculiar dynamics suggest that it is not rid of the problems that prompt foreign intervention in a country's internal affairs.

With the persistence of the rebellion by militants in the Niger-Delta Region, Nigeria has a big problem that the Federal government hasn't been able to solve for many years now. How will Jonathan Goodluck feel if a coalition of foreign governments decides to launch attacks in support of those rebels (whether the Movement for the Emancipation of the Niger Delta or the late ken Saro Wiwa's MOSOP)?

Nigeria's political history is a sordid one, which should have informed its leadership in their international engagements at all levels. The 1967–70 civil war that ravaged Nigeria was an internal crisis that led to more than one million deaths in Igboland because of the barbarism of the federal government in its effort to prevent Igboland from seceding. The history of this civil war is well known, especially how Britain and the United States funded and resourced the Federal government to suppress the rebels under Col. Odumegwu Ojukwu. The Biafrans haven't yet forgotten the atrocities meted out to them.

The Nigerian government's support for the military operations in Libya casts very serious doubts on that country's integrity. Nigeria's lust for violence is limitless. Known as a major power in the West African sub-region, Nigeria was the first country to push for a military action against the Ivory Coast's Laurent Gbagbo; but not getting enough backing, Jonathan Goodluck hasn't yet had his way. Why does Nigeria think that it is good to support rebels in Libya while suppressing the rebellion in its own backyard?

South Africa's Sordid Past
It is a paradox for South Africa to back the military action now going on against Libya because that country's own deplorable history in terms of human rights and governance doesn't warrant its support for the Coalition's actions. Between 1948 and early 1994 when the Nationalist Party ruled that country, no single day passed by without atrocities being committed against the hapless and helpless African population whose only crime was that they sought freedom as the original occupants of the land. How much didn't happen under Apartheid South Africa to scare the whole world within the era of the Unilateral Declaration of Independence?

Then, at the formation of the African National Congress, meaning the beginning of the rebellion against supremacist white rule, how much support did the ANC freedom fighters get from the West? None. While the West (Britain and the US, especially) supported the white supremacists, most African countries opened their doors to the ANC's freedom fighters (who the West described as dreaded terrorists and rebels).

Recollecting the gruesome murder of intellectuals (Steve Biko among them) and innocent citizens (including the scores of school children massacred in Soweto in 1960) brings tears to one's eyes at the hypocrisy of the West and the paralyzing bootlicking by African Heads of State who rush to support the West in its purposeful efforts to decimate Africa.

For its barbarity to the Africans seeking freedom, South Africa wasn't admitted into the ranks of the AU until the ANC took over the reins of government. South Africa's story is a long one of sadness. By supporting atrocities against a fellow AU member, South African intensifies the sadness.

The Gabonese Case
Omar Bongo's 30-year rule in Gabon did more harm than good for the citizens, which should have informed the current leadership's perspectives on matters concerning human rights. As he created favourable conditions to profit from the country's huge oil resources, he consigned millions of his compatriots to a life of excruciating poverty.

Omar Bongo ruled Gabon with an iron fist, which the West knew very well but did nothing to curb. France, which is now in the thick of events that are crippling Libya today, opened its doors to Omar Bongo and glorified him. His death hasn't solved the problems of the Gabonese citizenry because the baton has been passed on to his son to perpetuate the Bongo legacy. What justification, then, does Gabon have to join forces against Libya even when the AU strongly opposes such a military option?

What next for the African Union?
In all honesty, we must not blame only the West or the Arab League for what they are doing to Libya. We have to blame our own African leaders for lacking the political will and foresight to put their own house in order. The AU seems to have lost its relevance and can no more be relied on to lead the continent into any bright future. Having being so repudiated, what can it do to reassert its influence?

Long ago, when Ghana's Osagyefo Dr. Kwame Nkrumah proposed the African High Command, he was vitriolically opposed by conservative and shortsighted members of the OAU (at the time). Had they shared Nkrumah's visionary perspectives, Africa would have built up the capacity to provide for itself the kind of force that could help it solve its own internal crisis without the involvement of those whose primary interest in Africa is determined by how much of the continent's natural and human resources they can identify and loot with impunity.

Now that three of its members have betrayed it, what is there for the AU to do to stamp its authority on affairs? Or to prove to all member-states that they must place the broad interests of the Union far ahead of their own parochial interests? Will the AU take stringent measures to discipline these errant member-states? Or will it be bold enough to expel Nigeria, South Africa, and Gabon for betraying its cause?

There are precedents to guide the AU. When Morocco's intransigence over the Saharaoui Arab Democratic Republic's legitimate claim to Spanish (Western) Sahara became unbearable, the AU didn't hesitate to expel Morocco from the Union in protest. Again, the AU suspended Guinea because of the military intervention in that country's political system after the death of Lansana Conteh.

These actions indicate that the AU can take measures to discipline its errant member-states. These precedents beckon. Will the AU do same to Nigeria, South Africa, and Gabon to prove that it can call the shots? Then, will the AU go further to seek a peaceful resolution of the Libyan crisis or resign itself to fate as a huge white elephant on the African continent?