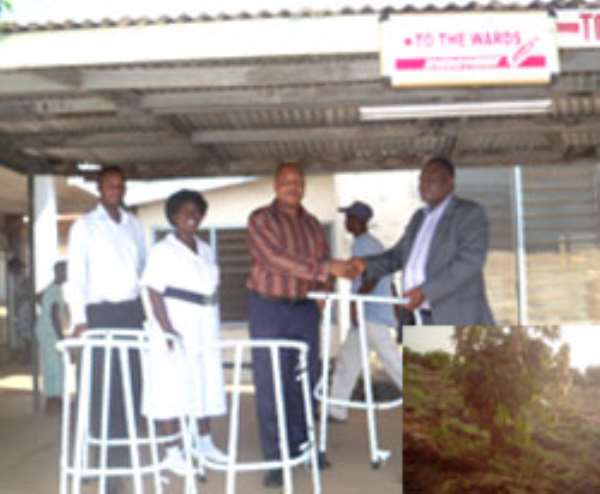 The best farmer in mango cultivation in the Ketu-North District, Mr. Prince Ahiadzro, who has cultivated 170 acres of mango, has stressed the need for the youth to change the negative attitude they have about agriculture, and take up farming as a business, to help them to generate more income and create wealth for themselves.

Mr. Ahiadzro said the era when people largely depended on white collar jobs as the major source of employment was over, because the increasing population of the nation called for other means of creating jobs, rather than depending on the government.

Speaking in an interview with Volta File at Dzodze, the Best Mango Plantation award winner said as a businessman, he saw the need to engage in serious farming as well, which he pointed out, had started yielding positive results, and that it was important for the youth to realise the benefits of agriculture.

Mr. Ahiadzro, in buttressing his point on the importance of agriculture, noted that he did not only concentrate on mango farming, but also fish farming, which he said, had the potential of generating a high level of income, because demand for fish was very high, as it provides the protein needs of the people.

Mr. Ahiadzro continued that the cultivation of mango and other agriculture activities were financially intensive, a situation he pointed out, had scared most of the youth away from participating in agriculture, and called on the government to help address the challenges confronting the youth in embracing agriculture.

He said the problem confronting most farmers was lack of finance to aid their activities, adding that the high interest level of loans from the banks was a disincentive.

This, he said, was making it more difficult for people to take up agriculture as a business, and urged the government to help create opportunities that would help address problems facing farmers in the country.

Mr. Ahiadzro explained that the more people developed an interest in agriculture, the more the dream of ensuring food security would be achieved, noting that those interested in mango farming could do so, and at the same time interplant food crops such as maize, yam and cassava for a period of two years.

The Ketu-North District Best Mango Farmer appealed to the government to help farmers in the region by providing reasonable financial assistance, as well as tractor services as an incentive, in order for them to stop the use of the old implements of hoe and cutlass.

He said having won an award at the District level, it would motivate him to put in more efforts to win regional and even national awards in future, and praised his wife, who he said was highly supportive in making it possible to win the award.

Touching on fish farming, Mr. Ahiadzro explained that as the operator of the White Dove Hotel at Dzodze, he initially decided only to produce fish for use at the hotel, but the economic viability of the project compelled him to expand the project beyond the earlier plan of supplying fish only to the hotel.

Mr. Ahiadzro stressed that even though fishermen in the country were putting in their best to supply the fish needs of the people, it was becoming increasingly clear that they were not able to meet the high demand for fish, noting that this development had created the opportunity for the youth to take advantage of the situation, to embark on fish farming.