POPE MILLS, WHERE IS THE SEPARATION OF CHURCH AND STATE? 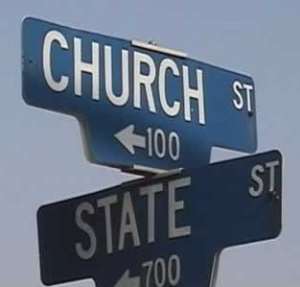 In the bad old days, especially in the 11th and 12th centuries, Christians perpetuated Crusades in a series of religion-driven military campaigns waged by much of Christian Europe against external and internal opponents. Crusades were fought mainly against Muslims, though campaigns were also directed against pagan Slavs, Jews, Russian and Greek Orthodox Christians, Mongols, Cathars, Hussites, Waldensians, Old Prussians, and political enemies of the popes. Crusaders took vows and were granted an indulgence for past sins. Now increasingly, Prof. Mills is beginning to sound like a Crusader.

Originally, the Crusades had the goal of recapturing Jerusalem and the Holy Land from Muslim rule and were launched in response to a call from the Eastern Orthodox Byzantine Empire for help against the expansion of the Muslim Seljuk Turks into Anatolia. The term Crusade is also used to describe contemporaneous and subsequent campaigns usually against pagans, heretics, and peoples under the ban of excommunication for a mixture of religious, economic, and political reasons. Rivalries among both Christian and Muslim powers led also to alliances between religious factions against their opponents.

The Crusades had far-reaching political, economic, and social impact, some of which have lasted into contemporary times and some crusade expeditions were diverted from their original aim.

Religious fanaticism frightens me. The everyday Christian, Muslim, Buddhist, Hindu, Scientologist and other, in my opinion is only a borderline away from a cult to enslave and indoctrinate those who they see as opposed to their religious views.

This article will attract a slew of insults. Yet, the point has to be made. President Mills was sworn in to uphold all of the constitution of Ghana. If he needs to make changes to suit his governance, there is a required two-thirds majority in parliament and a referendum by the people of Ghana if it is an entrenched clause. He is not tasked to add parts that he considers important in his personal life. The Ten Commandments of Christianity must be left at the door of his house when he sets off to do Government business and when it comes to religion in our constitution, he is charged to protect chapter 5, 21(c) and 26(1) and chapter 6, 35(5).

If he needs a reminder he should look to Israel and Palestine to see how religious rigidity has cost the lives of so many innocent children through the decades. He can also look to the recent past at then U.S. President George Bush and his "God-ordained" call to bring democracy to the Middle East. Hopefully he can see where it has led the world order and created one-stop terrorism drawn from religious fanaticism.

Christians form 30% of the religious groups in Ghana. Not all of Ghana is Christian, not all of Ghana is Muslim. Some Ghanaians are Pagans, others are Atheists and yet others are Free-Thinkers in the order of 14th century reformation thinkers, whose treatises moved us from the dark days of religious control to a more open minded discourse on the existence of God. If we want days set aside for Christians and Muslims, we are headed for court, because many Ghanaians are neither one nor the other and will be well within their rights to demand their day as well.

There is very good reason why progressive countries separate religion and state. History teaches many lessons. The crusades were a form of and no different from military interventions, using religious opposition as a basis for eliminating enemies and other political views. Many have died to protect this separation and doubtless many a Ghanaian voice will be raised if there is a deliberate attempt to blur the place of state and church.

By Sydney Casely-Hayford, The New Ghanaian