Keep the Church out of politics but not from governance 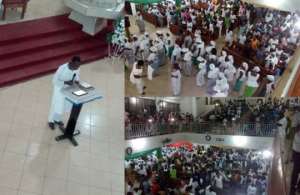 Governance is the process of governing. To govern is to coordinate order in freedom to promote wellbeing through efficient resource utilisation. Government is the system with mandate to govern. The church is two or more Christians manifesting the manifold wisdom of God. Politics is the self-centered means by which many access the mandate to govern.

I bumped into a recent news documentary by the BBC (Barbara Plett Usher) exposing a growing minority movement in the US claiming to be a Christian call to reclaim America for God. Starting with school boards where they are passing local laws to have "in God we trust" hanged in every school office and mixing church sermons of charismatic excitement with instigation to political radicalism. They label the left demonic and seem to insist the conservatives are God ordained owners of the United States of America. They are on a spirito­ political mission to reclaim "their country" from those who have legalised same-sex marriage and abortion. They don't say much about the seeming racist posture of the eight and the bigotic capitalism. They claim to believe the Bible and to be led by the Holy Spirit. Their posture is clearly " we" against "them"; fighting for the God who "so loved the world". In my opinion same-sex is as devilish as racism and abortion is as murderous as hatred. I perceive this to be the posture of true Christianity. Let us not fall prey to the trap of attractive politics.

In Ghana the President has made a promise to build a national cathedral; and he says those who oppose him are like Samba lat and Tobias, the anti-God guys who sought, unsuccessfully, to descale Nehemiah from rebuilding the walls of Jerusalem; which walls were successfully built in 52 days because " the people were willing". The national cathedral must be built by the willingness of the people not by a political campaign promise. And yes, I guess, many Christians like me would have a national cathedral; hoping our individual lives are built as a holy temple to our God who dwells not in houses made by hands but in believing hearts that do his will, including his will of managing our national resources prudently and not pursuing after " what is in it for me".

The board of trustees of the Cathedral project is making frantic effort to fend off political finger pointing from the opposition in a near­ hang parliament that had the chance to obstruct the appointment of a final minister they now insist is serving a conflict of interest.

The church should go for moral influence not for political power. When a government institution takes a policy position that seems erroneous, church leaders may not have to threaten the incumbent government with the electoral advantage of the Christian mass. Not all Christians are naive to be misled. We should deal directly with the error of policies and expose the wrongness therein instead of playing the ostrich and using political shortcuts. The Jews expected a political messiah, and they crucified the Lord of glory because they were disappointed by the approach of deliverance God applies.

God is interested in human governance. But will not be used for political interest. He is holy and protective of the vulnerable. He is not racist. He is not elitist. Neither is he supportive of sexual perversion, killing of unborn babies or progressive immorality. He is neither left nor right and does not vote for a status quo which privileges one over the other. He is neither a social democrat nor a patriot of property-owning democracy. He is mere righteous. He shares his Supremacy with no one. So none of us should use the Bible to defend our greed and quest for control and dominance. No one should use philantrocapitalism or social justice to misrepresent God. If people are poor because they are lazy they should repent and work hard. If people are rich because they have inherited stolen wealth and enslaved labour they should repent and restitute.

Let us not allow humanity to be misled by devilish deception through politics that seeks to usurp the right to govern. Governance is not for politicians. It is for leaders. Politicians, those who want their way whether right or wrong, and do not support the right when it is not owned by them and they do not make personal benefits from it, are not leaders.

Governance is for leaders, not politicians.

That is why it is a sad situation to have religious politicians become church leaders and have messed our spiritual and moral governance system. Now that the national cathedral mission is under scrutiny, feathers are rattling, and many want to rebrand themselves as not having been part of any possible corruption.

An important approach to enhance sanity in the church is to get every Christian t9 be more responsible and not leave Christian representation to only popular preachers. All of us should have a strong personal relationship with our personal saviour Jesus the Lord, study his word and live righteously.

and then we should speak up against the moral decadence in our church and country; while we also support our church leaders and defend them when they are doing what is right. It is written: Righteousness exalts a nation, but sin is a reproach to any people (Proverbs 14:34).