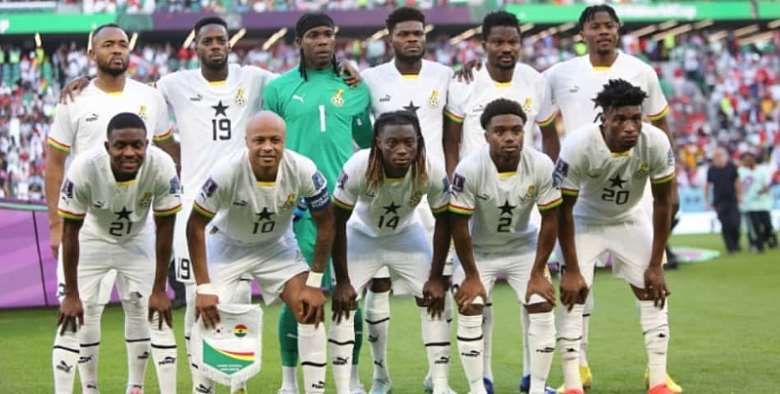 The Black Stars of Ghana have ended up the worst performing team from Africa as far as their Group stage appearance at the ongoing FIFA World Cup Qatar 2022 is concerned.

Ghana is the only African nation that finished bottom of their Group in the World Cup despite an $8,166,000 budget for its Group stage appearance.

The Black Stars were in Group H, alongside Portugal, South Korea and Uruguay.

Portugal topped Group H with 6 points, followed by South Korea on 4 points, Uruguay in third place with 4 points and Ghana last in the group with just 3 points from their win over South Korea.

The performances from the rest of the four African nations that made it to the World Cup namely Cameroon, Senegal, Morocco and Tunisia, were quite impressive as compared to Ghana.

Both Senegal and Morocco progressed to the round of 16, with Senegal finishing second in Group A with 6 points, while Morocco topped Group F with 7 points.

Cameroon and Tunisia could not advance to the knockout stage but the two nations both secured historic wins over France and Brazil who are first and fourth best footballing nations per FIFA Ranking of October 6, 2022.

Cameroon defeated Brazil 1 - 0, becoming the first ever African nation to ever win Brazil at the World Cup. Aside their victory over Brazil, Cameroon managed to finish third in Group G with 4 points, while a European powerhouse, Serbia finished last in that group. Vincent Aboubakar scored Cameroon's historic winning goal against Brazil on Friday night, December 2, 2022.

Tunisia equally produced a historic 1 - 0 victory over France in their last Group D fixture, finishing 3rd in that Group with 4 points while Denmark who were considered as one of the dark horses of the 2022 World Cup finished bottom of the table with one point.

It is astonishing that after all the hype and expenses made on Ghana, the nation could not even manage to advance to the knockout stage.

This is the second World Cup in a row that Black Stars have failed to progress to round of 16. In Brazil in 2014, the Black Stars dropped out of the tournament at the Group Stage.

Ghana's two successful World Cup appearances came in 2006 in Germany and 2010 in South Africa when they made it to the Quarterfinal and were on the verge of becoming the first African nation to advance to the semi-finals of the mundial except for Uruguay's Luiz Suarez to deny them that golden opportunity by stopping the ball from entering the Uruguayan goal post with his hand in the dying minute of the match.