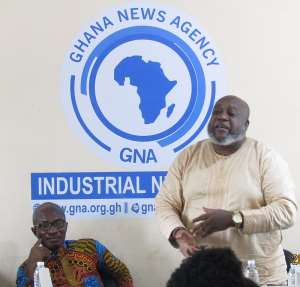 Dr. Chris Kpodar, the Executive Director at Solomon Investment Ghana Limited has recommended to African Governments to invest in Artificial Intelligence for an everlasting solution to corruption.

He explained that without effective public scrutiny, the risk of money being lost to corruption and misappropriation is vast, which makes it necessary for African governments to invest in Artificial Intelligence.

Dr Kpodar who is also the Chief Technical Advisor, Centre for Greater Impact Africa, (CGIA) emphasized that the ability of Artificial Intelligence applications to work would radically reduce or remove manual operations which forms the fertile grounds for corrupt practice.

“Artificial Intelligence has the capacity to reveal or even predict corruption or fraud that previously was nearly or completely impossible to detect. Dr. Kpodar stated.

Dr Kpodar who served as Consultant for Africa and the Middle East advising governments and companies on investment stated at a forum organized by the Ghana News Agency Tema Regional Office and monitored by the Communication for Development and Advocacy Consult (CDA Consult) in Tema.

He indicated that Artificial Intelligence is the modernization of all traditional, experience, as well as tested methods of investigation that cannot be influenced by the machine applied.

Dr. Kpodar however commended the government for initiating the digitization system, “digitization is a prerequisite for Artificial Intelligence deployment as an anti-corruption weapon”.

He admitted that even though corruption remains the biggest canker existing in society, Artificial Intelligence is the key to solving the problem.

Mr Francis Ameyibor, Ghana News Agency Tema Regional Manager reiterated the appeal for all Ghanaians to join in the campaign to stop the canker of corruption for the preservation of the nation’s future generation.

“The redemption of Ghana from corruption would immensely benefit not only the present generation of Ghanaian children but even those yet unborn because it would create a very strong foundation to make the economy resilient and buoyant,” he said.

Mr Ameyibor said the fight was a shared responsibility that required the immense contribution of everyone.

He also entreated both public and private institutions to partner effectively with the media in their programmes and activities to prevent the incidence of corruption.