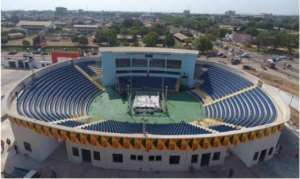 The sports industry can be a huge impetus for national development and help improve the nation's economy through tourism.

In line with the Mahama Government to develop sports infrastructure, the 15,000 Seater Capacity Cape Coast Stadium was completed and commissioned.

The Bukom Boxing Arena is the first boxing arena to be built in Ghana. The multipurpose facility was commissioned by HE John Dramani Mahama in November, 2016, and has a seating capacity of 4,000. Other facilities in the open-air edifice include a sports hall, Aerobic centre, Olympic size swimming pool and conference hall.

Ghana is reaping the benefits of the developmental investments made in the various sporting disciplines under President Mahama.

And the Progressive prominence of Ghanaian sportswomen and men was seen at the African Youth Games in Gaborone in Botswana in 2014, the Youth Olympics in Nanjing, China in 2014 and the Commonwealth Youth Games in Apia, Samoa in 2015.

In 2015, Ghana's contingent to the All-Africa Games in Brazzaville, Congo, brought home 19 medals. This medal haul is the highest in the history of our country.

In 2014, under President Mahama, Martha Bissah stunned the world by winning Ghana's first ever Olympic gold medal at any level in any sporting activity during the Youth Olympics in Nanjing, China.

Martha's feat was not an individual brilliance, in 2015, history repeated itself when another youth athlete, Richard Seklorwu won Ghana's first ever gold medal in the Commonwealth Youth Games.

It is also worth noting that after the commissioning of the Bukom Boxing Arena in 2016, Ghana bagged medals in boxing in the successive Olympic Games: 2020 and 2022. Prior to these, the last time Ghana won medals in boxing at the Olympics was thirty years ago in Barcelona in 1992.

These can never be a coincidence. Something must have been done right under the visionary leadership of JDM.